About 113 passengers were on board, including US, Canadian, Ukrainian, German, and British citizens, a source with knowledge of the matter said 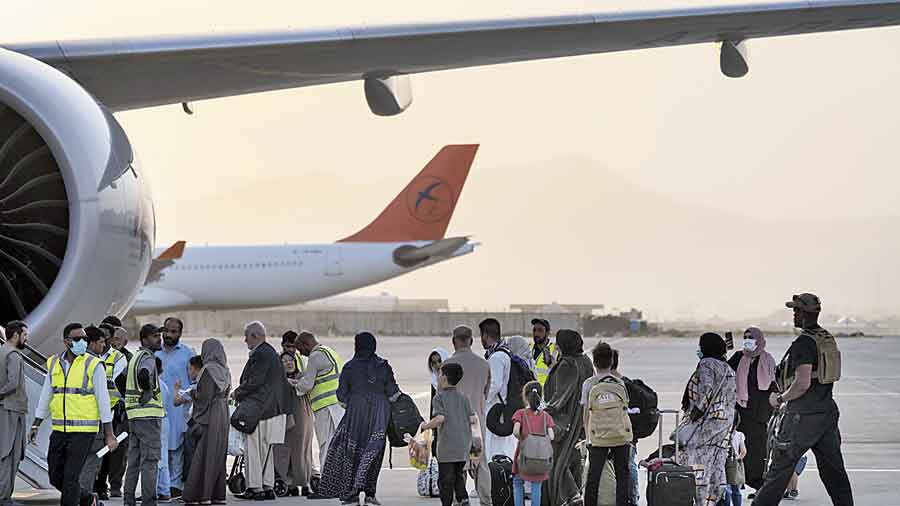 The first international commercial flight since the end of the chaotic western airlift from Afghanistan last month took off from Kabul airport on Thursday with more than 100 passengers on board, officials said.

About 113 passengers were on board, including US, Canadian, Ukrainian, German, and British citizens, a source with knowledge of the matter said.

They will land in Doha and head to a compound currently hosting Afghan and other evacuees. They were transported to the airport in a Qatari convoy after Qatar worked with parties on the ground to secure safe passage, the source said.

Although international flights have gone in and out with officials, technicians and aid in recent days, this was the first such civilian flight since the evacuation which followed the Taliban’s seizure of the capital on August 15 as foreign military forces pulled out.

It marked an important step in the Islamist militant group’s efforts to bring some kind of normality back to the country, which is facing economic collapse and a humanitarian crisis.

A US official had said 200 foreigners in Afghanistan, Americans among them, were set to depart on charter flights from Kabul on Thursday after the Taliban agreed to their evacuation.

Qatari and Turkish technical teams helped restore operations at the airport, from where 124,000 foreigners and at-risk Afghans were evacuated by US-led forces in the fraught days after the Taliban takeover.

Qatari special envoy Mutlaq bin Majed al-Qahtani described Thursday’s flight out as a regular one and not an evacuation. There would also be a flight on Friday, he said.

“Call it what you want, a charter or a commercial flight, everyone has tickets and boarding passes,” al-Qahtani said from the tarmac, quoted by Al Jazeera. “Hopefully, life is becoming normal in Afghanistan.”

In Washington, White House spokeswoman Jen Psaki said that as of Wednesday about 100 US citizens were still in Afghanistan but that not all necessarily wanted to leave now. Some may have family in the country or other reasons for not departing yet, she said.

The flight came two days after the Taliban announced an interim government made up of mainly ethnic Pashtun men, including Islamist hardliners and some wanted by the US on terrorism charges.

Many critics called on the leadership to respect basic human rights and revive the economy, which faces collapse amid steep inflation and food shortages.

The Taliban government wanted to engage with regional and western governments, the minister said. But Psaki said no one in the Biden administration “would suggest that the Taliban are respected and valued members of the global community”.