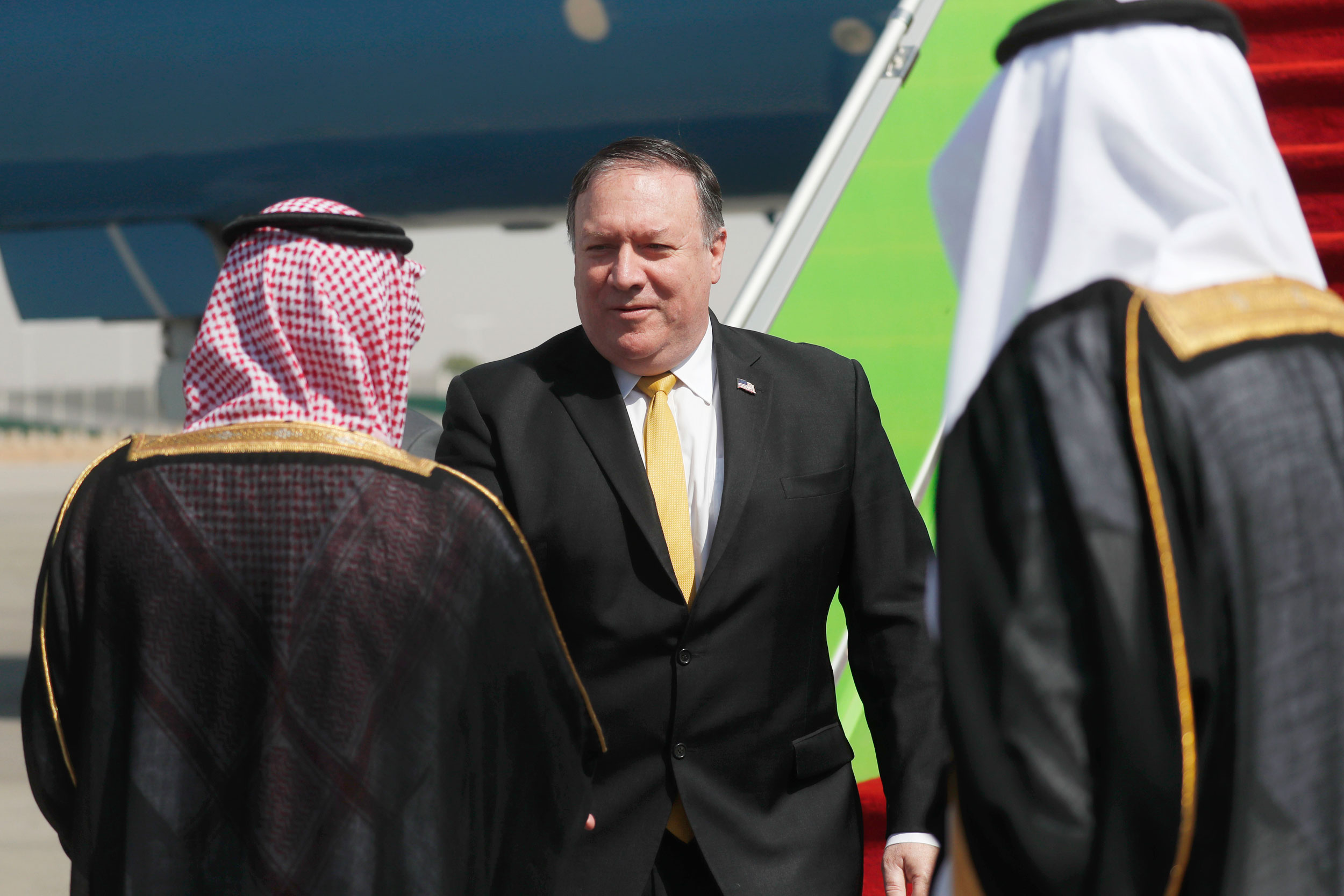 US secretary of state Mike Pompeo met on Tuesday with Saudi Arabia's King Salman over the disappearance and alleged slaying of Saudi writer Jamal Khashoggi, who vanished two weeks ago during a visit to the Saudi Consulate in Istanbul.

Pompeo's arrival came hours after a Turkish forensics team finished a search inside the consulate. Police planned a second search, this one of the Saudi consul's home in Istanbul, a Turkish foreign ministry official said.

Turkish officials say they fear Khashoggi was killed and dismembered inside the Istanbul consulate. Saudi officials previously have called the allegations 'baseless,' but reports in US media on Tuesday suggested the kingdom may acknowledge the writer was killed there.

Pompeo landed in Riyadh on Tuesday morning and was welcomed by Saudi Foreign Minister Adel al-Jubeir on landing. He didn't make any remarks to the media.

Soon after, Pompeo arrived at a royal palace, where King Salman greeted him. America's top diplomat thanked the king 'for accepting my visit on behalf of President (Donald) Trump' before going into a closed-door meeting.

Trump had dispatched Pompeo to speak to the monarch of the world's top oil exporter over Khashoggi's disappearance. Trump, after speaking on Monday with King Salman, said without offering evidence that the slaying could have been carried out by 'rogue killers.' That potentially offers the US-allied kingdom a possible path out of a global diplomatic firestorm.

'The king firmly denied any knowledge of it,' Trump told reporters on Monday. 'It sounded to me like maybe these could have been rogue killers. I mean, who knows? We're going to try getting to the bottom of it very soon, but his was a flat denial.'

However, left unsaid was the fact that any decision in the ultraconservative kingdom rests solely with the ruling Al Saud family. Pompeo also was to meet with Saudi Crown Prince Mohammed bin Salman, whom Khashoggi wrote critically about for The Washington Post and whose rise to power prompted the writer to go into a self-imposed exile in the United States.

'The effort behind the scenes is focused on avoiding a diplomatic crisis between the two countries and has succeeded in finding a pathway to deescalate tensions,' said Ayham Kamel, the head of the Eurasia Group's Mideast and North African practice. 'Riyadh will have to provide some explanation of the journalist's disappearance, but in a manner that distances the leadership from any claim that a decision was made at senior levels to assassinate the prominent journalist.'

CNN reported that the Saudis were going to admit the killing happened but deny the king or crown prince had ordered it — which does not match what analysts and experts know about the kingdom's inner workings.

The New York Times reported that the Saudi royal court would suggest that an official within the kingdom's intelligence services — a friend of Prince Mohammed — had carried out the killing. According to that reported claim, the crown prince had approved an interrogation or rendition of Khashoggi back to Saudi Arabia, but the intelligence official was tragically incompetent as he eagerly sought to prove himself. Both reports cited anonymous people said to be familiar with the Saudi plans.

Saudi officials have not answered repeated requests for comment over recent days from The Associated Press.

Saudi officials have been in and out of the building since Khashoggi's disappearance Oct. 2 without being stopped. Under the Vienna Convention, diplomatic posts are technically foreign soil that must be protected and respected by host countries.

Turkey has wanted to search the consulate for days. Permission apparently came after a late Sunday night call between King Salman and Turkish President Recep Tayyip Erdogan. In statements after the call, both praised the creation of a joint Saudi-Turkish probe.

The Turkish inspection team included a prosecutor, a deputy prosecutor, anti-terror police and forensic experts, the state-run Anadolu news agency reported. Certain areas of the consulate were to remain off-limits, although officials would be able to inspect surveillance cameras, Turkish media reported.

The Foreign Ministry official spoke on condition of anonymity in line with government regulations.

Khashoggi has written extensively for the Post about Saudi Arabia, criticizing its war in Yemen, its recent diplomatic spat with Canada and its arrest of women's rights activists after the lifting of a driving ban for women. Those policies are all seen as initiatives of Prince Mohammed, the son of King Salman, who is next in line to the throne.

Prince Mohammed has aggressively pitched the kingdom as a destination for foreign investment. But Khashoggi's disappearance has led several business leaders and media outlets to back out of the upcoming investment conference in Riyadh, called the Future Investment Initiative.

Trump previously warned of 'severe punishment' for the kingdom if it was found to be involved in Khashoggi's disappearance, which has spooked investors in Saudi Arabia and SoftBank, a Japanese firm that manages tens of billions of dollars for the kingdom.

Trump's warning drew an angry response Sunday from Saudi Arabia and its state-linked media, including a suggestion that Riyadh could wield its oil production as a weapon. The US president has been after King Salman and OPEC to boost production for weeks to drive down high crude oil prices, caused in part by the coming re-imposition of oil sanctions on Iran after the US withdrawal from that's country's nuclear deal with world powers.