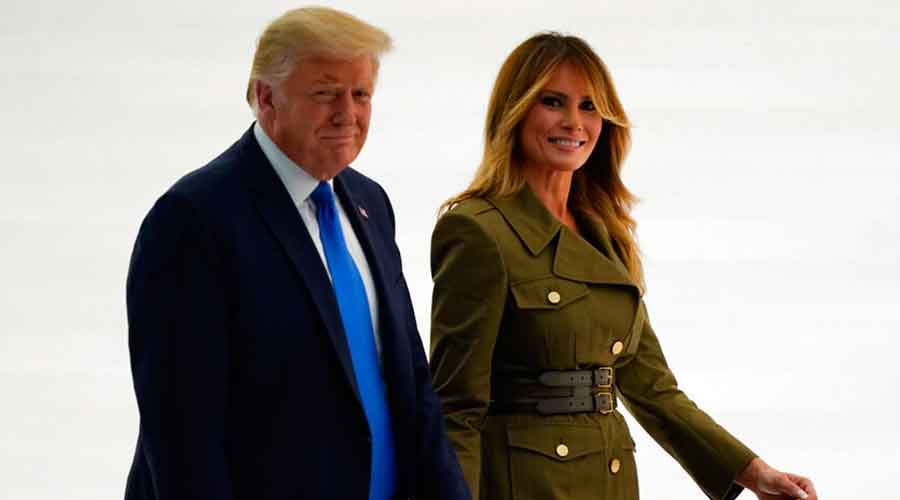 President Donald Trump leaves with first lady Melania Trump after her speech to the 2020 Republican National Convention from the Rose Garden of the White House, Tuesday, August 25, 2020, in Washington.
AP
Reuters   |   Washington   |   Published 27.08.20, 03:20 AM

US First Lady Melania Trump offered sympathy for victims of the coronavirus pandemic and a plea for racial understanding in a Republican convention speech on Tuesday aimed directly at the women voters who have abandoned US President Donald Trump.

On the convention’s second day, the speech's warm tone was out of step with a Republican gathering that featured harsh rhetoric about Democratic challenger Joe Biden and sometimes apocalyptic warnings about the dangers of Democratic governance.

Trump’s wife acknowledged the pain of the pandemic in sharp contrast to most other speakers at the party’s national convention, notably her husband, assailed by Democrats for his lack of solace during a US health crisis that has killed more than 178,000 people.

“I want to acknowledge the fact that since March, our lives have changed drastically,” Melania Trump told a crowd seated in the White House Rose Garden, the President in the front row.

“My deepest sympathy goes out to everyone who has lost a loved one.”

“And my prayers are with those who are ill or suffering. I know many people are anxious and some feel helpless. I want you to know: You’re not alone.”

With opinion polls showing Trump shedding support among college-educated women turned off by his combative style, Melania Trump and other women featured on Tuesday appeared to be trying to sway the critical voting bloc ahead of the November 3 presidential election.

The First Lady reflected on the racial unrest that has swept the country in the months since the death in May of a Black man, George Floyd, under the knee of a white policeman in Minnesota.

Protests flared anew this week after a Black man was shot and left paralysed by police in Wisconsin.

“I urge people to come together in a civil manner so we can work and live up to our standard American ideals,” she said. “I also ask people to stop the violence and looting being done in the name of justice and never make assumptions based on the colour of a person’s skin.”

The speech by Melania Trump, whose 2016 convention address was marred by plagiarism of lines from a 2008 Michelle Obama speech, capped a day when Republicans sought to reshape the narrative around the economy by largely ignoring millions of jobs lost to the coronavirus pandemic.

Trump, 74, still scores well in opinion polls on the economy, even as approval of his handling of the pandemic and other issues has plunged.

An array of officials and everyday Americans cited Trump’s efforts to loosen economic regulations, put “America First” in trade deals and preserve religious freedom as reasons to back him against Biden, 77, Barack Obama’s former vice-president.

“Our economic choice is very clear. Do you want economic health, prosperity, opportunity and optimism, or do you want to turn back to the dark days of stagnation, recession and pessimism?” White House economic adviser Larry Kudlow said.

Trump, a former reality television star, again blurred the line between government and politics on Tuesday as he used the White House as a venue to promote his re-election bid.

The President starred in videos featuring a naturalisation ceremony and the signing of a pardon to suggest that he is not anti-immigrant or a hardliner on crime — even as the convention has stressed his tough law-and-order approach.

Before Melania Trump’s speech, the tone at times echoed Monday’s opening day, when Republicans reached out to their conservative core supporters by painting a bleak picture of a future America under Biden’s leadership.Cissie Graham Lynch, granddaughter of the late evangelist the Reverend Billy Graham, said a Biden presidency would leave “no room for people of faith”. Biden is Catholic, and his faith was highlighted at last week’s Democratic convention where he was formally nominated.

Pete Buttigieg, who competed in the Democratic primary before endorsing Biden, challenged the Republican characterisation on Twitter, recalling a walk Trump took to a church during protests outside the White House to hold up a Bible for photographers.

“They would speak of faith? The choice here is so simple. One man waves a borrowed Bible around, the other actually reads it,” Buttigieg tweeted.

In an appeal to black voters, many of whom have been alienated by his sometimes divisive rhetoric, Trump in a video pardoned a convicted Nevada bank robber, Jon Ponder, a black man. Trump, assailed by rights activists for immigration policies, also led a naturalisation ceremony for five immigrants becoming US citizens.