Only hope to turn the tide in Sievierodonetsk is more artillery, says Ukraine 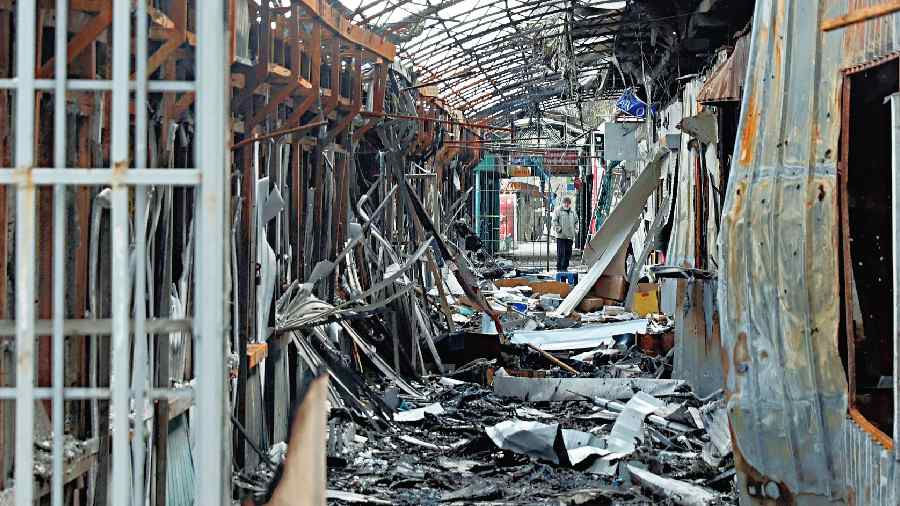 The debris of an open market destroyed by a Russian military strike in Sievierodonetsk, Luhansk region of Ukraine.
File picture
Reuters   |   Kyiv   |   Published 10.06.22, 12:54 AM

Ukrainian forces claimed on Thursday to have pushed forward in intense street fighting in the eastern city of Sievierodonetsk, but said their only hope to turn the tide was more artillery to offset Russia's massive firepower.

In the south, Ukraine’s defence ministry said it had captured new ground in a counter-attack in Kherson province, targeting the biggest swathe of territory Russia has seized since its invasion in February.

The battle amid the ruins of Sievierodonetsk, a small industrial city, has become one of the war’s bloodiest, with Russia concentrating its invasion force there. Both sides say they have inflicted massive casualties.

Sievierodonetsk and its twin city Lysychansk on the opposite bank of the Siverskyi Donets river are the last Ukrainian-controlled parts of Luhansk province, which Moscow is determined to seize as one of its principal war objectives.

Russian forces are focusing all of their might in the area, Ukraine’s Security Council secretary Oleksiy Danilov told Reuters in an interview on Thursday.

“They don’t spare their people, they’re just sending men like cannon fodder,” he said. “They are shelling our military day and night.”

In a rare update from Sievierodonetsk, the commander of Ukraine’s Svoboda National Guard Battalion, Petro Kusyk, said Ukrainians were drawing the Russians into street fighting to neutralise Russia’s artillery advantage.

“Yesterday was successful for us — we launched a counteroffensive and in some areas we managed to push them back one or two blocks. In others they pushed us back, but just by a building or two,” he said in a televised interview.

“Yesterday the occupiers suffered serious losses — if every day were like yesterday, this would all be over soon.”

But he said his forces were suffering from a “catastrophic” lack of counter-battery artillery to fire back at Russia’s guns, and getting such weapons would transform the battlefield.

“Even without these systems, we are holding on fine. There is an order to hold our positions and we are holding them. It is unbelievable what the surgeons are doing without the proper equipment to save soldiers’ lives.”

Sievierodonetsk mayor Oleksandr Stryuk said on Thursday around 10,000 civilians were still trapped inside the city — around a tenth of its pre-war population.

To the west of Sievierodonetsk, Russia is pushing from the north and south, trying to trap Ukrainian forces in the Donbas region comprising Luhansk and neighbouring Donetsk province, blasting Ukrainian-controlled towns in their path with artillery.

In Soledar, a salt-mining town near Bakhmut close to the front line, buildings had been blasted into craters.

Remaining residents, mostly elderly, were sheltering in a crowded cellar. A woman peeled potatoes and swatted away flies. Men lay asleep on cots. Kateryna, 85, curled up under a blanket, her hair wrapped in a scarf.

“It will be as God shall give,” she said, her voice drowned out by the sound of barking dogs.

Antonina, 65, had ventured out to see her garden. “We are staying. We live here. We were born here.”