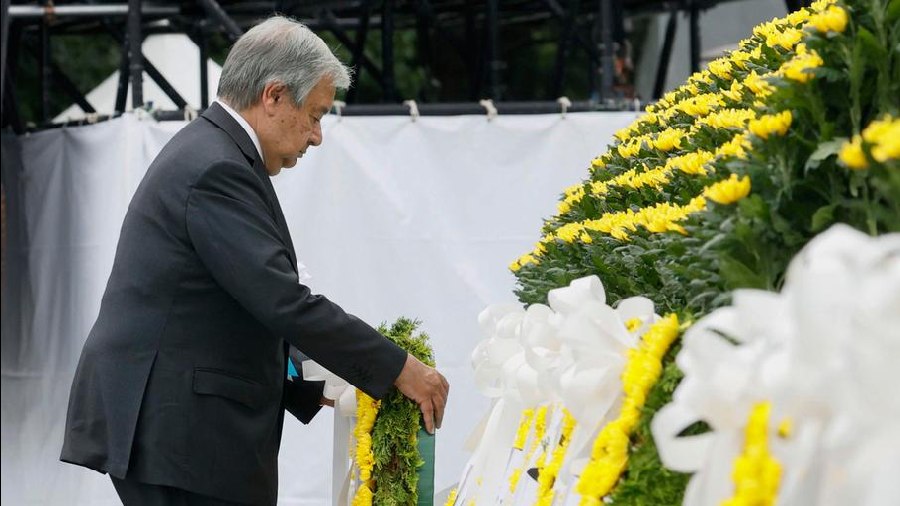 Bells tolled in the Japanese city of Hiroshima on Saturday to mark the 77th anniversary of the world's first atomic bombing.

In Peace Park in central Hiroshima, UN Secretary-General Antonio Guterres was among leaders gathered to mark the precise moment that the US dropped the atomic bomb, resulting in 140,000 deaths by the end of 1945, many of them instantaneous with the bomb's impact. It is only the second time a UN Secretary-General has taken part in the annual event.

Japan's Prime Minister Fumio Kishida, a native of Hiroshima, was also in attendance.

A moment of silence and doves for peace

The crowds, which included leaders and diplomats, observed a moment of silence at the exact time the moment the bomb exploded. Hundreds of doves, a symbol of peace, were released.

On August 6, 1945 at 8:15 a.m., the US B-29 warplane Enola Gay dropped the atomic bomb, given the nickname "Little Boy." Three days later, on August 9, a second atomic bomb was dropped on Nagasaki, killing 75,000 instantly and leading to Japan's unconditional surrender in the war.

The city of Hiroshima, with a population of 350,000 at the time, was levelled immediately and beyond those killed with the atomic bomb's impact, thousands later died of injuries and radiation sickness.

Guterres: We are one mistake 'away from Armageddon'

The anniversary comes amid renewed concerns about nuclear proliferation, with Guterres warning of a renewed arms race after Russia's decision to invade Ukraine on February 24.

Russia's seizure of the Zaporizhzhia nuclear power plant in Ukraine in March and its use as a base of military operations ever since has also heightened concerns about the safety of civilian nuclear power.

"We are one mistake, one misunderstanding, one miscalculation away from Armageddon," said UN chief Guterres.

"Three quarters of a century later, we must ask what we've learned from the mushroom cloud that swelled above this city in 1945," he added.

Guterres did not mention Russia directly in his address.

The mayor of Hiroshima Kazumi Matsui was more critical of Moscow in his remarks.

"In invading Ukraine, the Russian leader, elected to protect the lives and property of his people, is using them as instruments of war, stealing the lives and livelihoods of civilians in a different country," Matsui said.

"Around the world, the notion that peace depends on nuclear deterrence gains momentum."

Japanese Prime Minister Kishida told Guterres that he strongly condemns China's recent ballistic missile launches as "a serious issue concerning Japan's security and the safety of Japanese people," according to an official statement.

Russian ambassador to Japan Mikhail Galuzin laid flowers at the site of a memorial stone in the park on Thursday. Galuzin told reporters his country would not use nuclear weapons. Since the Ukraine war started, Vladimir Putin said Russia would use its nuclear arsenal to "defend its sovereignty" and state TV hosts routinely take a bellicose tone on the matter.