Hope lies buried for dozens trapped in landslides in Philippines 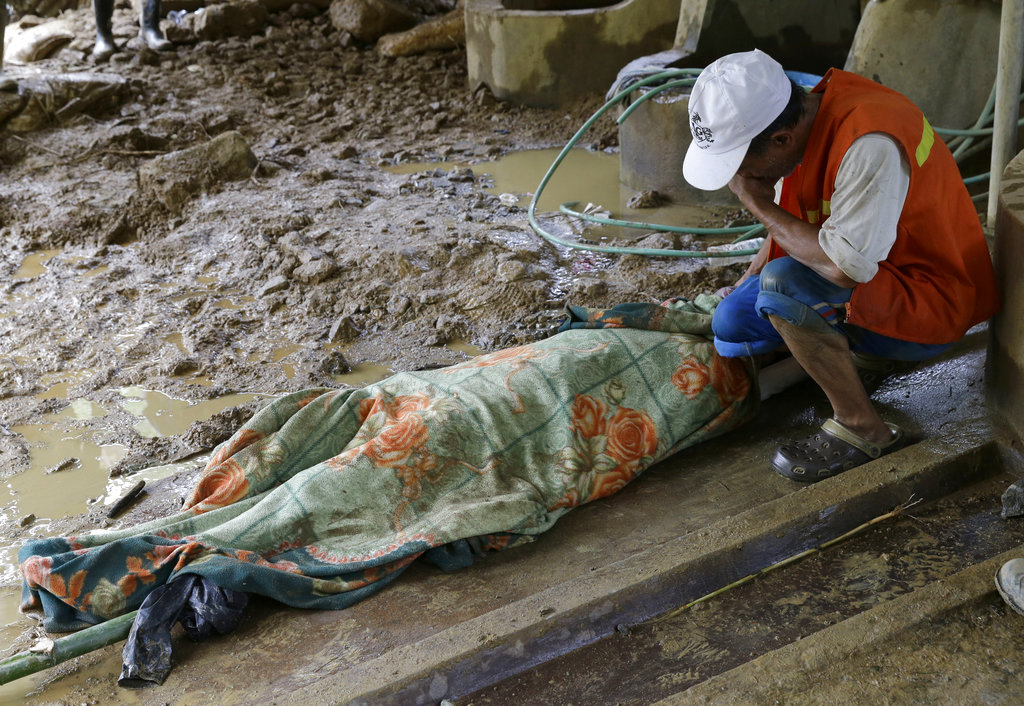 Pio Badangayon cries as she sits next to the body of her son-in-law Edwin Banawol after it was retrieved by rescuers in Itogon in the Benguet province in northern Philippines.
AP
AP   |     |   Published 18.09.18, 06:44 AM

Tens of thousands of small-time miners in recent years have come to the mountain provinces from the lowlands and established communities in high-risk areas like the mountain foothills of Itogon.

Mangkhut on Monday was still affecting southern China’s coast and the provinces of Guangdong, Guangxi and Hainan and rain and strong winds were expected to continue through Tuesday.

On Monday afternoon, Mangkhut was about 200 km west of the city of Nanning in Guangxi region, traveling in a northwesterly direction and weakening as it progressed. There were no additional reports of deaths or damage.

A Philippine mayor said on Monday that it’s unlikely any of the dozens of people thought buried in a huge landslide set off by Typhoon Mangkhut will be found alive, though rescuers were still digging through the massive mound of mud and debris covering a chapel where they had sheltered.

Mayor Victorio Palangdan of Itogon town in Benguet province, among the worst-hit by the typhoon that struck on Saturday, said at a news conference that of the 40 to 50 people thought buried, there’s a “99 per cent (chance) that they really are all dead.”

Mangkhut has killed 65 people since it tore through the Philippines. The storm killed another four people in China, where Mangkhut weakened to a tropical storm as it churned inland on Monday.

Palangdan said rescuers have dug out 11 bodies from a former miners’ bunkhouse that had been turned into a chapel. Dozens of residents sought shelter there during the storm despite warnings it was dangerous.

“They laughed at our policemen. They insisted,” he said. “They were resisting when our police tried to pull them away. What can we do?”

Hundreds of rescuers, including police and soldiers, scrambled to search for the missing as grief-stricken relatives waited nearby, many of them quietly praying.

“We will not stop until we recover all the bodies,” Palangdan said.

Most of those buried in the slide are thought to be poor miners and their families. In order to prevent such tragedies going forward, environmental secretary Roy Cimatu said the government would deploy soldiers and police to stop illegal mining in six mountainous northern provinces, including Benguet.

Philippine officials have said in the past that gold mines tunneled by big mining companies legally or by unauthorized individuals and small outfits have made the hillsides unstable and more prone to landslides.

Life was gradually returning to normal along the hard-hit southern China coast, where highrises swayed, coastal hotels flooded and windows were blown out. Rail, airline and ferry services had been restored and casinos in the gambling enclave of Macau had reopened for business.

In Hong Kong, crews were clearing fallen trees and other wreckage left when the financial hub felt the full brunt of the storm on Sunday.

“This typhoon really was super strong ... but overall, I feel we can say we got through it safely,” Carrie Lam, the territory's chief executive, told reporters.

The Hong Kong Observatory said Mangkhut was the most powerful cyclone to hit the city since 1979, packing winds of 195 kmph.

The typhoon struck Asian population centres as tropical weather also was devastating the southern US. Florence has dumped historical levels of rain on North Carolina. 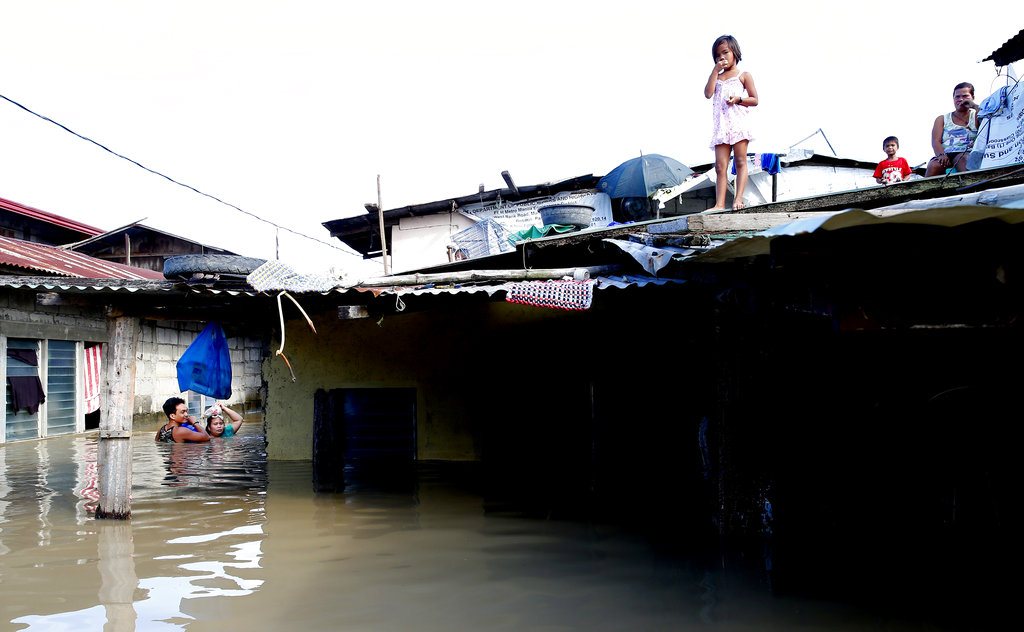 A couple wades through water as a girl watches from a rooftop following flooding brought about by Typhoon Mangkhut, which barreled into northeastern Philippines.
AP 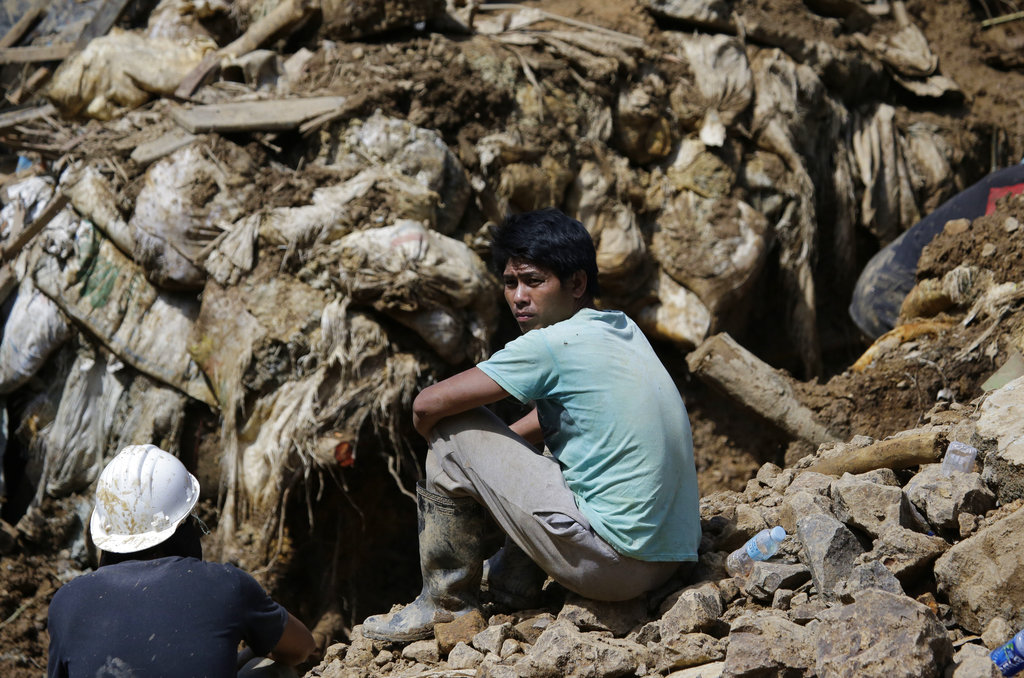 A miner waits for news as search continues for victims believed to be buried.
AP 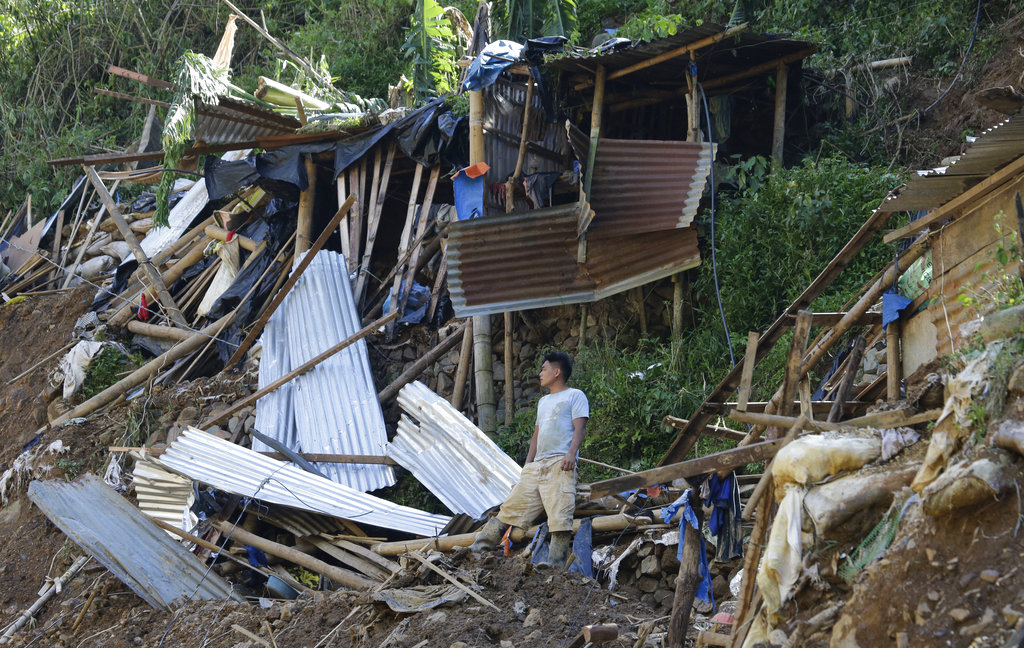