The floating restaurant capsized while being towed away from Hong Kong 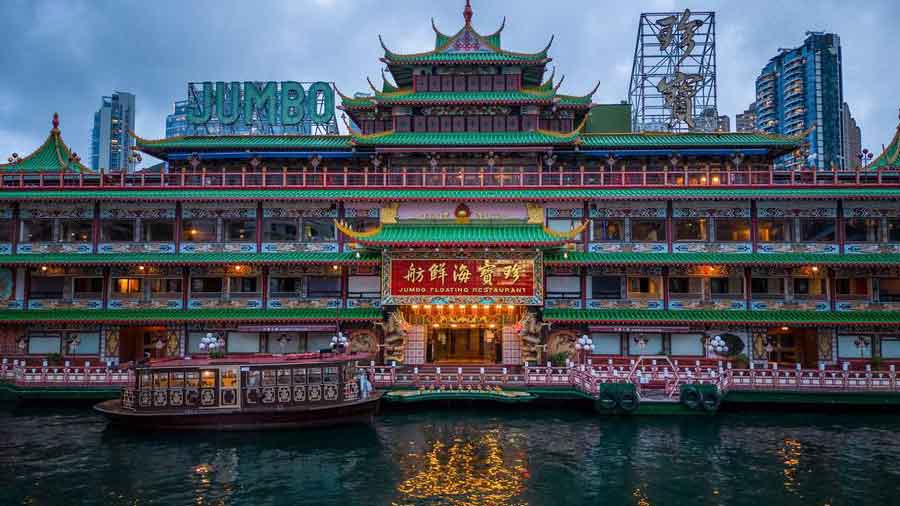 This file photo taken on June 2, 2022 shows the Jumbo Floating Restaurant located in the typhoon shelter near Aberdeen on the south side of Hong Kong island
Deutsche Welle
Deutsche Welle   |   Published 21.06.22, 04:45 PM

The floating restaurant sank while being towed away from Hong Kong. The restaurant was forced to shut its doors during the pandemic in 2020 and laid off all of its staff.

Hong Kong's iconic Jumbo floating restaurant has capsized in the South China Sea, its parent company said on Monday. The incident occurred less than a week after the three-story vessel was towed away from the city.

The restaurant began taking on water on Sunday near the Paracel Islands, en route to an undisclosed location, after it "encountered adverse conditions," holding company Aberdeen Restaurant Enterprises said in a statement.

"The water depth at the scene is over 1,000 meters (3,280 feet), making it extremely difficult to carry out salvage works," it added. The company said it was "very saddened by the incident" but that no crew members were injured.

The restaurant was nearly 80 meters in length and was a popular attraction for well over forty years, having been opened in 1976 by the late casino tycoon Stanley Ho, and reportedly cost more than $3.8 million to build.

It was built in the design of a Chinese imperial palace and was once considered a must-see landmark, drawing visitors from around the world.

Operator Melco International Development said last month the business had not been profitable since 2013 and losses had exceeded HK$100 million ($12.7 million). It announced last month that Jumbo would leave Hong Kong and await a new operator.

Millions were being spent on maintenance and inspections even though the restaurant was not in operation.

In 2020 the restaurant was forced to close its doors due to the global pandemic and let go of its staff.

Jumbo departed Hong Kong last week Tuesday and was on its way to a low-cost site for maintenance when it sank.