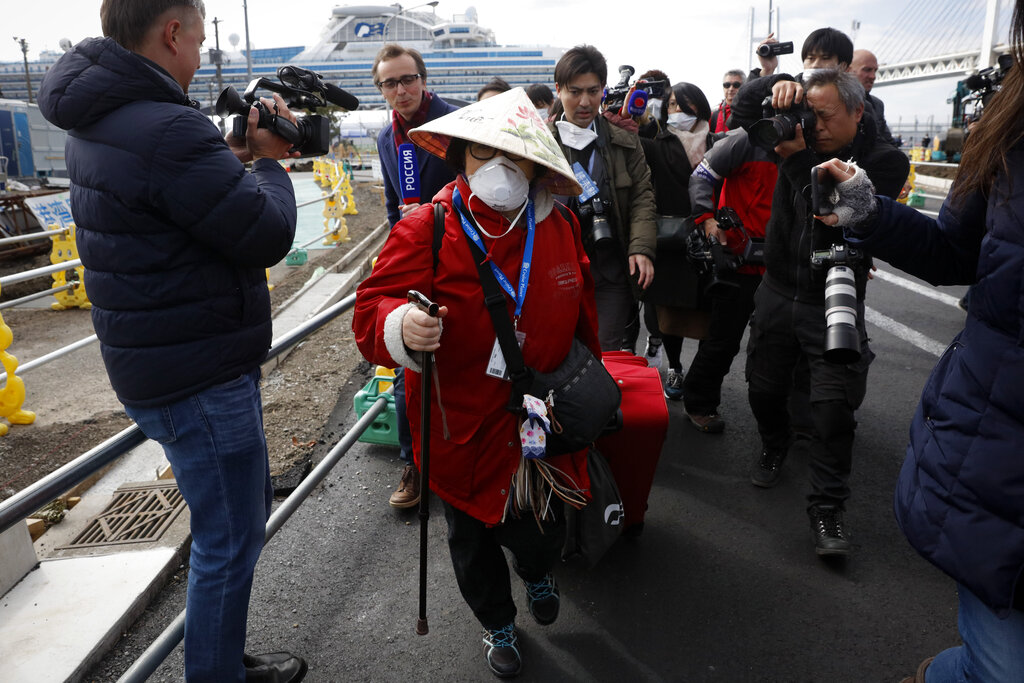 An unidentified passenger is surrounded by the media after she disembarked from the quarantined Diamond Princess cruise ship Wednesday
AP
AP, AFP   |   Yokohama   |   Published 19.02.20, 07:25 AM

Hundreds of passengers began leaving the Diamond Princess cruise ship Wednesday after the end of a much-criticized, two-week quarantine that failed to stop the spread of a new virus among passengers and crew. 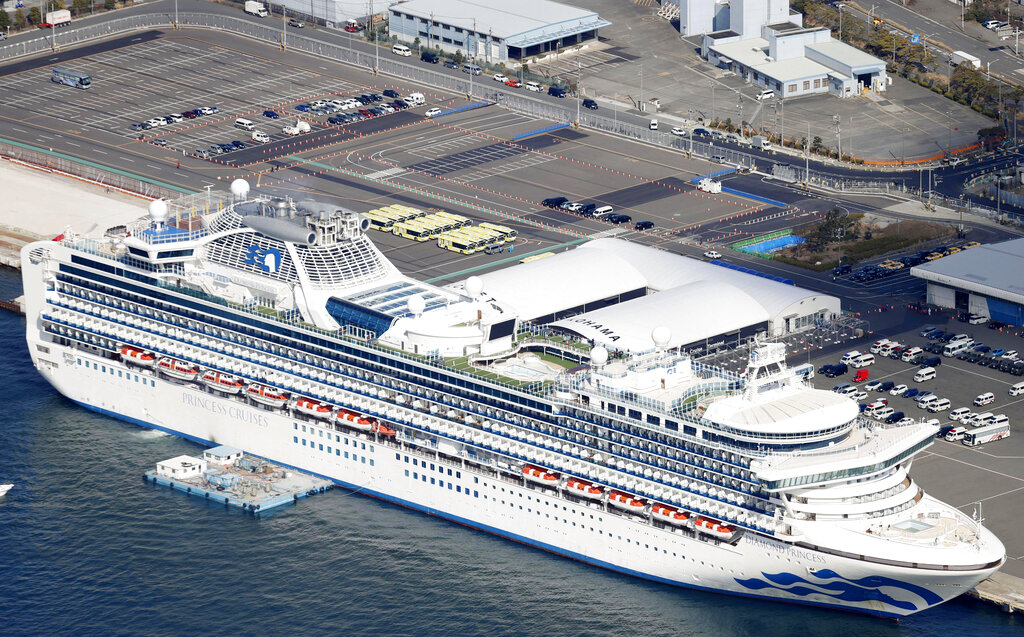 The quarantined Diamond Princess cruise ship is anchored at a port in Yokohama, near Tokyo on Wednesday
AP

The Diamond Princess has proved a fertile breeding ground for the virus with at least 542 positive cases, and there is mounting criticism of Japan's handling of quarantine arrangements as passengers ready to disperse into the wider world.

The ship is the site of the most infections outside of China, where the illness named COVID-19 emerged late last year. As of Tuesday, 542 cases have been identified among the original 3,711 people on the ship.

New figures in China showed the death toll surging beyond 2,000 with more than 74,000 infected. Hundreds more cases have been reported in two dozen countries.

Many foreign governments say they won't let in passengers from the ship until they have another quarantine period, so it was striking to see passengers disembark, get into taxis and disappear into Yokohama. 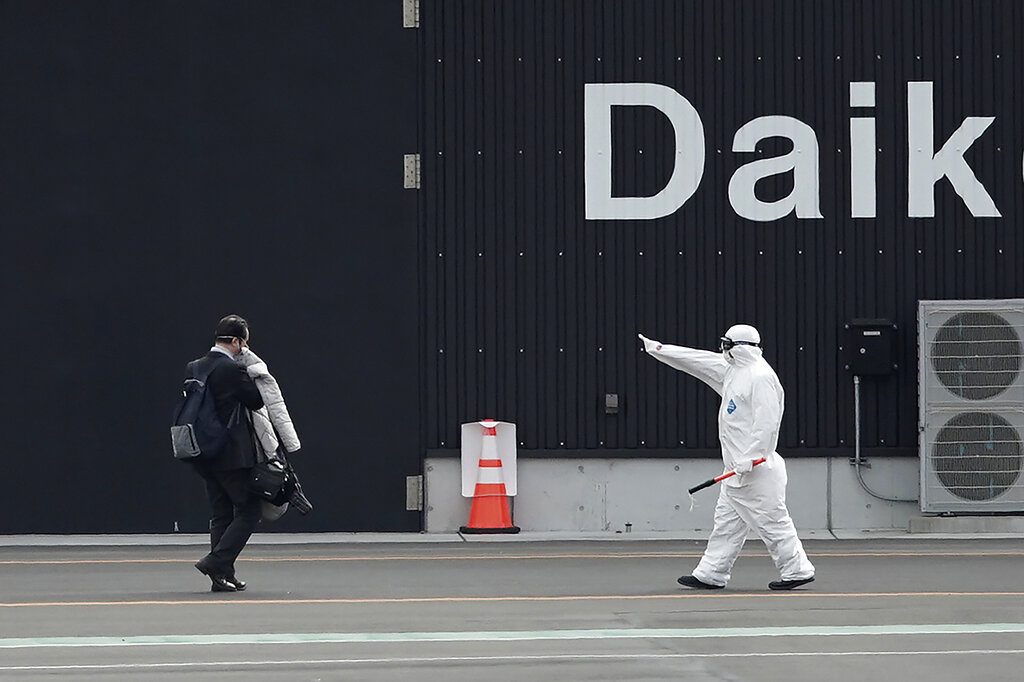 One of passengers, left, from the quarantined Diamond Princess cruise ship is guided after walking out from the ship at a port in Yokohama, near Tokyo, Wednesday
AP

Japanese soldiers helped escort some passengers, including an elderly man in a wheelchair who wore a mask and held a cane. Some passengers got on buses to be transported to train stations. Some people still in their ship cabins waved farewell from their balconies to those who'd already departed.

'I'm a bit concerned if I'm OK to get off the ship, but it was getting very difficult physically,' a 77-year-old man from Saitama, near Tokyo, who got off with his wife, told Kyodo News. 'For now, we just want to celebrate.'

Those getting off the ship in Japan with negative virus tests have fulfilled the Japanese quarantine requirement and are free to walk out and go home on public transportation, Health Minister Katsunobu Kato said Wednesday.

He said the plan was approved by experts at the National Institute of Infectious Diseases. Passengers are only asked to watch their health conditions carefully for a few days and notify local health authorities if they have any symptoms or worries, he said.

Some passengers said on Twitter they received health check forms asking if they had symptoms such as a headache, fever or coughing. Passengers who tested negative and had no symptoms still had to get their body temperature checked before leaving.

About 500 passengers were expected to leave Wednesday, and Japanese officials will spend several days staging the high-stakes evacuation of about 2,000 others who were kept aboard the ship at Yokohama near Tokyo after one passenger who departed the Diamond Princess earlier in Hong Kong was found to have the virus.

Even though Japanese officials insist the number of infected patients is leveling off, dozens of new cases on the ship continue to mount daily. On Tuesday, 88 people tested positive; a day earlier 99 others were found to have been infected.

Crew members, who couldn't be confined to their rooms over the last two weeks because they were working, are expected to stay on the ship.

The ship’s operator, Princess Cruises, said in a statement Tuesday that 169 people who tested positive recently were still on the ship as they waited for transportation to hospitals.

The safety and transport logistics for moving hundreds of people will test Japanese officials.

The United States evacuated more than 300 people over the weekend who are now in quarantine in the U.S. for another 14 days. South Korea earlier Wednesday returned seven people from the cruise ship, placing the six South Koreans and one Japanese family member into quarantine.

Other foreign passengers were to be picked up by chartered flights sent from Canada, Australia, Italy and Hong Kong.

Chief Cabinet Secretary Yoshihide Suga defended Japan's handling of the quarantine: “In the beginning, the United States expressed gratitude for the Japanese side. And there are many Americans who chose to stay on the ship.'

The U.S. government said Americans who chose to remain on board the ship in Japan instead of returning on a chartered flight cannot return home for at least two weeks after they come ashore. The governments picking up other passengers have similar policies.

U.S. officials cited the passengers' possible exposure to the new virus while on board the Diamond Princess.

Japanese health officials say the 14-day quarantine on the ship was adequate, noting that all but one of more than 500 Japanese returnees from the epicenter of the virus in China who initially tested negative were found to be virus-free at the end of their 14-day quarantine.

Those officials also defended precautions taken on the ship. About 1,000 crew members were told to wear surgical masks, wash their hands, use disinfectant sprays and stop operations at restaurants, bars and other entertainment areas after Feb. 5, when the first group of 10 infections was reported and the start of the 14-day quarantine was announced.

Passengers were instructed to stay in their cabins and not walk around or contact other passengers. Those in windowless cabins could go out on the deck for about an hour each day.

The quarantine was largely for passengers because crew members kept sharing double rooms and continued to serve guests by delivering food, letters, towels and amenities, and entering passenger cabins for cleaning. Crew members also ate in groups in a crew mess hall.