Nations to raise sums by selling bonds collectively, hand out money to the hardest-hit 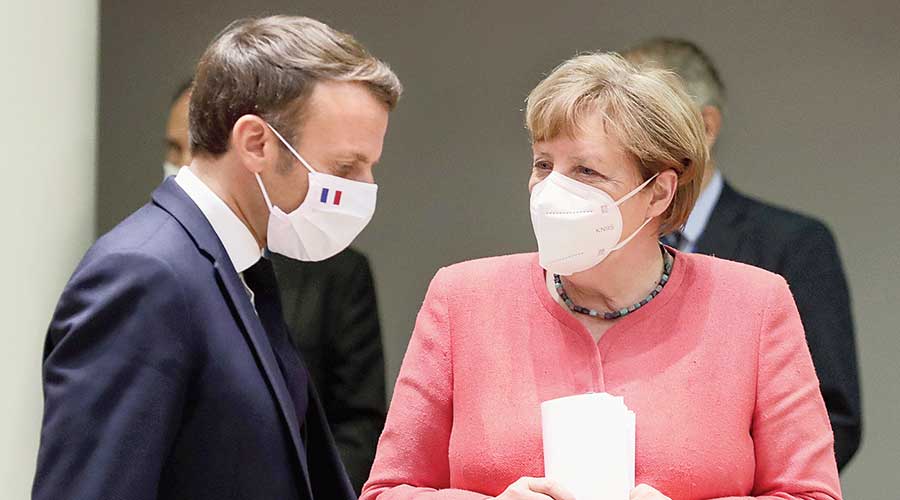 After nearly five days of intense haggling, EU leaders early on Tuesday stepped up to confront one of the gravest challenges in the bloc’s history, agreeing to a landmark spending package to rescue their economies from the ravages of the pandemic.

The 750 billion euro ($857 billion) stimulus agreement, spearheaded by Chancellor Angela Merkel of Germany and President Emmanuel Macron of France, sent a strong signal of solidarity even as it exposed deep new fault lines in a bloc reshaped by Britain’s exit.

The deal was notable for its firsts: European countries will raise large sums by selling bonds collectively, rather than individually; and much of that money will be handed out to member nations hit hardest by the pandemic as grants that do not have to be repaid, and not as loans that would swell their national debts.

Those extraordinary steps reflected a difficult consensus among members: that the scale of the crisis facing them required groundbreaking measures to ensure the bloc’s legitimacy, stability and prosperity.

“Europe has shown it is able to break new ground in a special situation. Exceptional situations require exceptional measures,” Merkel said in a news conference at dawn. ‘‘A very special construct of 27 countries of different backgrounds is actually able to act together, and it has proven it.”
But the lengthy negotiations in Brussels were notable, too, for their exceptional rancour — and it was clear that the pooling of resources and sovereignty had come at a cost.

A strange kind of political theatre, never visited upon EU summits before, marked the meeting — with leaders donning masks and bumping elbows to greet.

They were safely spaced in a vast hall, their entourages trimmed to only the most essential members.

When they convened on Friday, it was their first in-person summit in the five months since the coronavirus took hold in Europe. The meeting was officially scheduled to last until Saturday. By Monday morning, exhausted and angry after bargaining all night, they were still tussling over the details. The start of Monday’s session was twice delayed, and then it spilled into Tuesday morning.

As talks broke down over the weekend, so did many precautions the leaders and their teams had taken to protect themselves from the virus, which in most of Europe has been brought down to manageable levels, in any case.

As the hours wore on and the talks grew heated, the diplomatic gloves came off, and so did the masks. Breakout groups met in rooms far smaller and less ventilated than the 300-seat auditorium where the general meeting was convened.

While there is no underestimating the importance of the agreement — the generosity of its size and the novelty of its mechanisms — the acrimony and dramatics of the four-day meeting betrayed the new divisions within the bloc. They also signalled where the fractures may lie in future crises.

The talks were defined by shifting roles among members now jostling to make their voices heard and for leadership in the absence of Britain, which had often played the part of the thrifty contrarian, fastidious about rules, in past summits.

This time, Merkel, unusually for a German leader, and holding the EU’s rotating presidency, put her finger on the scale on behalf of hard-hit southern countries and did battle with the nations she once championed, the northern members that have been less affected by the virus and are wary of the vast sums being thrown around.