Debilitating financial costs are mounting for California every day 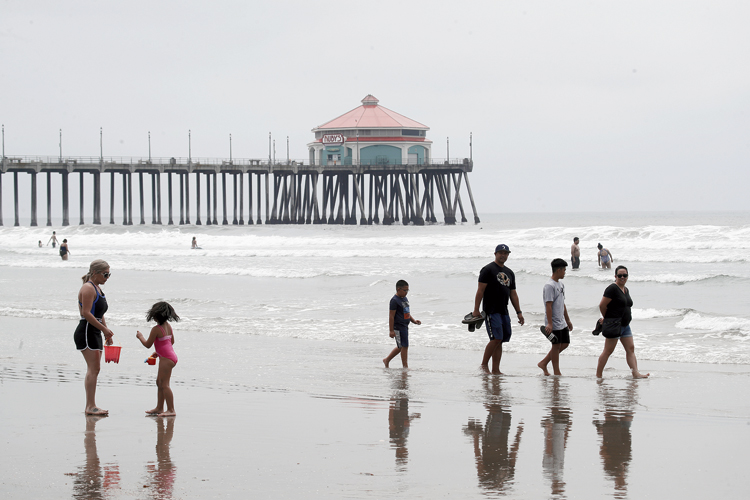 Bathers walk on Huntington Beach, California. Before the pandemic, California made more money from tourism than any other US state.
(AP photo)
Tim Arango And Thomas Fuller   |   Los Angeles   |   Published 26.05.20, 11:40 PM

Locked down in their homes, the four former California governors clicked into a Zoom call and one after another described how they dealt with the crises that had defined their time in office.

For Pete Wilson, it was the 1994 Northridge earthquake. Gray Davis evoked the electricity disaster that drove him out in a recall election, and Arnold Schwarzenegger and Jerry Brown lamented the Great Recession.

But the former governors agreed that nothing they confronted was as dire or will be more consequential than what the current occupant of the office, governor Gavin Newsom, now faces.

The economic collapse resulting from the coronavirus pandemic “dwarfs any problem the four of us had”, Davis recalled saying at the meeting, which took place late last month and was convened by Newsom.

California was the first state to shut down to counter the coronavirus and has avoided the staggeringly high infection and death rates suffered in the northeast. But the debilitating financial costs are mounting every day.

California has an estimated unemployment rate above 20 percent, according to Newsom — far higher than the 14.7 percent national rate and similar to the estimated rate for New York state, where the virus has hit the hardest.

In Los Angeles, with movie productions shut down, theme parks padlocked and hotels empty, things are even worse: The jobless rate has reached 24 per cent, roughly equal to the peak unemployment of the Great Depression, in 1933.

“Economic free fall,” is how Tom Steyer, the former presidential candidate, described it. He is heading the state’s economic recovery task force, a group of business leaders, labour activists, economists and former governors who have begun meeting to plot a way out.

California faces a daunting budget deficit of $54 billion, which could force painful cuts to schools, social programmes, health care and road building. And the state was the first to borrow from the federal government to finance its $13 billion in unemployment claims.

California has a hugely diversified economy, and many of the industries that have made it so strong are also the ones getting hit the hardest. By many measures California, which has the nation’s largest tourism industry, public university system, entertainment industry and port system and produces far more food than any other state, stands to lose more in the coronavirus-induced recession.

In a matter of weeks, the number of unemployed Californians, around 5 million, has more than doubled the number of the jobless at the peak of the Great Recession.

A large number of those losing their jobs were already among the most vulnerable, including service workers earning minimum wage and truck drivers who serve the ports of Los Angeles and Long Beach, where trade volume is down substantially.

For many, unemployment cheques have been arriving, stanching the bleeding temporarily. But thousands of undocumented Californians are unable to collect unemployment because of their immigration status.