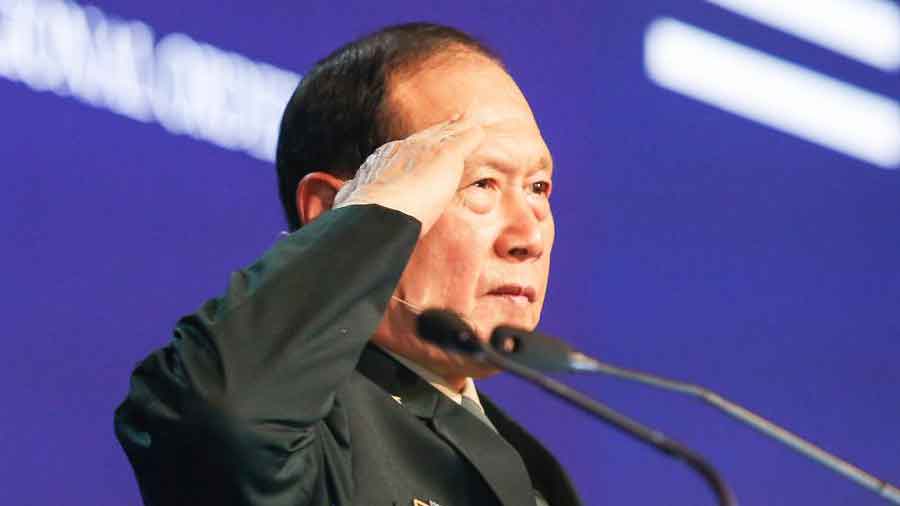 Wei Fenghe slammed US Secretary of Defense Lloyd Austin's "smearing" accusation that China was causing regional instability. He said Beijing would do whatever it takes to ensure reunification with Taiwan.

The "pursuit of Taiwan independence is a dead end," China's Defense Minister Wei Fenghe told the Shangri-La Dialogue in Singapore, on Sunday.

He said China would do anything in its power to stop Taiwanese independence amid soaring tensions with the United States over the issue.

"If anyone dares to secede Taiwan from China, we will not hesitate to fight. We will fight at all costs, and we definitely will fight to the very end. This is the only choice for China," Wei warned.

His statement comes a day after US Defense Secretary Lloyd Austin criticized China for a "more coercive and aggressive approach to its territorial claims."

"We've witnessed a steady increase in provocative and destabilizing military activity near Taiwan, and that includes PLA [Chinese military] aircraft flying near Taiwan in record numbers in recent months and nearly on a daily basis," Austin said at the same conference in Singapore.

He said China-US relations were at a critical and crucial juncture. "Confrontation will benefit neither our two countries nor the world," Wei added.

Wei suggested the US seeking multilateral partnerships with Indo-Pacific nations was an attempt to back China into a corner.

"No country should impose its will on others or bully others under the guise of multilateralism,'' he said.

But he also struck a more conciliatory tone at points, calling for a "stable" China-US relationship, which he said was "vital for global peace."

Tensions over Taiwan have escalated in particular due to increasing Chinese military aircraft incursions into the island's Air Defense Identification Zone.

Taiwan and China split during a civil war in 1949, but China considers it a renegade province to be reunited with the mainland.

Austin on Saturday also said Washington remained committed to the "one-China policy," by which the US only formally recognizes Beijing, but maintains informal relations and defense ties with Taipei.

Wei however said the US was not adhering to its policy, saying "it keeps playing the Taiwan card against China."

He said China's "greatest wish'' was "peaceful reunification'' with Taiwan

Austin said the US stands "firmly behind the principle that cross-strait differences must be resolved by peaceful means," but also that the US would continue to meet its commitments to Taiwan.

Taiwan and the Indo-Pacific