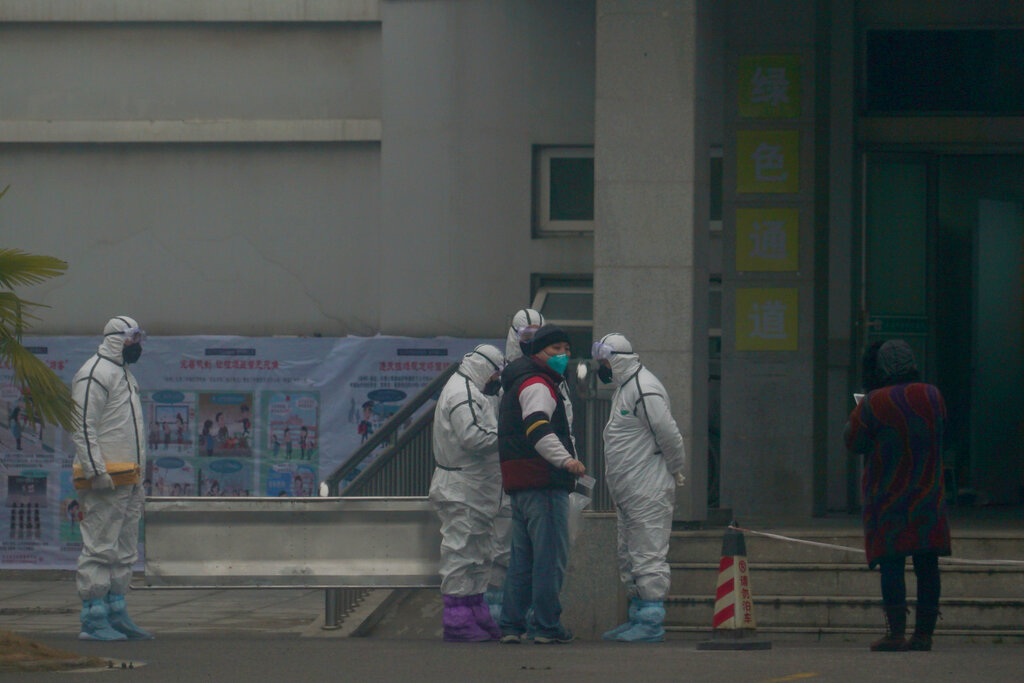 Staff in biohazard suits hold a metal stretcher by the in-patient department of Wuhan Medical Treatment Center, where some infected with a novel coronavirus are being treated, in Wuhan, China, on January 21, 2020.
AP
AP   |   Published 21.01.20, 08:11 AM

Heightened precautions were being taken in China and elsewhere Tuesday as governments strove to control the outbreak of a new coronavirus that threatens to spread further during the Lunar New Year travel rush.

Anxieties grew after Chinese government expert Zhong Nanshan revealed on state television late Monday that the virus can be spread from one person to another. The first cases late last month were connected to a seafood market, and transmission was suspected to be occurring from animal-to-human. Authorities previously had not confirmed human-to-human transmission.

Four people have died, and more than 200 have been infected, and most of the illnesses and all of the fatalities were in Wuhan, the central Chinese city where the seafood market is located.

In addition to 198 cases in Wuhan, more than 20 have been diagnosed in Beijing, Shanghai and southern Guangdong province, and four cases have been confirmed overseas among Chinese travelers in South Korea, Japan and Thailand.

Two cases in Guangdong were people who had not visited Wuhan but fell ill after family members returned from there. Zhong cited those as evidence the disease had spread between humans.

Concerned about a global outbreak similar to SARS, a different coronavirus that spread from China to more than a dozen countries in 2002-2003, numerous nations have adopted screening measures for travelers arriving from China, especially those from Wuhan.

Stock markets fell in much of Asia as investors worried about the potential impact on tourism and the economy.

“The outbreak of a SARS-like coronavirus in Wuhan is developing into a major potential economic risk to the Asia-Pacific region now that there is medical evidence of human-to-human transmission,' wrote Rajiv Biswas, the Asia Pacific chief economist at IHS Markit, in an analysis.

He noted that the SARS crisis hurt the economies of China, several Southeast Asian nations and as far afield as Canada and Australia.

Australia, Japan and South Korea were among countries increasing airport screenings. Australia receives a significant number of travelers from China, including three direct flights a week from Wuhan into Sydney, and these flights will be met by border security and biosecurity staff for assessments, the nation's chief medical officer Brendan Murphy told reporters.

“We need to step up our caution levels as the number of patients is continuing to rise in China,” Japanese Prime Minister Shinzo Abe said at a meeting with the health minister and others from related ministries.

The possibility the virus could be spread between people increases the chances it could spread faster and more widely. The Chinese government has estimated people will make around 3 billion trips during the Lunar New Year travel season, but some social media users have said they may stay home due to concern about the spread of the illness.

Chinese President Xi Jinping instructed government departments to promptly release information on the virus and deepen international cooperation. His comments Monday were his first on the illness.

When SARS first infected people in southern China, the Chinese government initially tried to conceal the severity of the epidemic, which ended up killing nearly 800 people. The cover-up was exposed by a high-ranking physician.

Gabriel Leung, dean of medicine at the University of Hong Kong, said Chinese authorities have responded much more quickly this time.

“Our underlying assumptions are, the force of infection is very different now ... because so many public health measures have been undertaken and so many interventions have been executed,' Leung told reporters at a briefing.

Leung, who was heavily involved in the response to SARS, said modeling shows that cases will multiply over the coming weeks but the outbreak will gradually lose momentum as precautions take effect.

Initial symptoms of the new coronavirus include fever, cough, tightness of the chest and shortness of breath.

Everyone entering Beijing United Family Hospital on Tuesday was required to have their temperature checked as soon as they entered the door. The hospital provided surgical masks to all patients, who were told they had to wear them. All nurses, doctors and cleaning staff were also wearing masks.