No annual GDP target set due to Covid-19 crisis 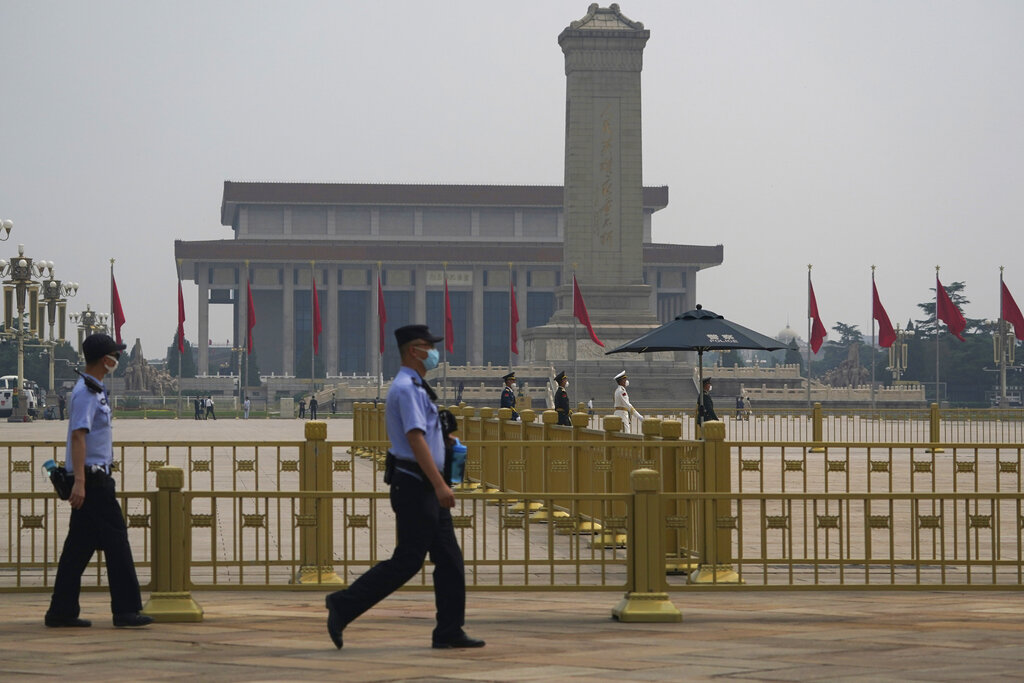 Police guard at the Tiananmen Square ahead of the opening of the third plenary session of the 13th National Committee of the Chinese People's Political Consultative Conference (CPPCC) in Beijing, Thursday, May 21, 2020.
AP
PTI   |   Beijing   |   Published 22.05.20, 04:27 AM

China kicked off its delayed annual Parliament session on Friday with the government avoiding to set any specific target for this year's GDP, citing uncertainties arising out of the Covid-19 pandemic, slowdown of the Chinese and global economies and the decline in international trade.

The National People's Congress (NPC) session with about 2,900 members began this morning at the Great Hall of People amid unprecedented security in the backdrop of the coronavirus pandemic which has killed 4,634 people in China, majority of them in Wuhan where the deadly virus emerged in December last year.

As of Thursday, the overall confirmed Covid-19 cases in China had reached 82,971, including 82 patients who were still being treated in hospitals, according to China's National Health Commission (NHC).

'I would like to point out that we have not set a specific target for economic growth this year,' Chinese Premier Li Keqiang said in his 23-page work report submitted to the NPC, China's legislature.

China has opened up almost all parts of the country after the virus outbreak and is currently holding the annual parliament session. It was due to be held in March but was postponed due of the coronavirus crisis.

Chinese President Xi Jinping, Premier Li along with top leaders of the ruling Communist Party of China (CPC) attended the meeting without wearing masks, while 2,897 members who were present wore the masks.

The attendees paid a silent tribute to people who died fighting the Covid-19 and those who lost their lives in the pandemic.

All those who attended the meeting needed to go through Covid-19 tests before getting permission to attend it. Fewer media people, who were allowed to attend the meeting, needed to undergo tests. They waited for six hours for results and were permitted if they tested negative.

The meeting is taking place amid concerns over the slowdown of China's economy which contracted to 6.8 per cent in the first quarter, the first time since 1976, due to the coronavirus lockdowns and its impact on business in the world's second-largest economy.

'I would like to point out that we have not set a specific target for economic growth this year. This is because our country will face some factors that are difficult to predict in its development due to the great uncertainty regarding the Covid-19 pandemic and the world economic and trade environment,' Li said.

In his work report Li said the GDP in 2019 reached 99.1 trillion yuan, representing a 6.1 per cent increase over the previous year.

Around 13.52 million new urban jobs were created, and the surveyed unemployment rate was below 5.3 per cent, he said.

The session of the NPC, regarded as the rubber stamp parliament for its routine approval of the CPC proposals, would meet for a week during which it is expected to approve a host of new laws.