Buffalo shooting: Gunman had second target in his sights

The incident has shaken and outraged many, including black residents who say they have endured discrimination and segregation there 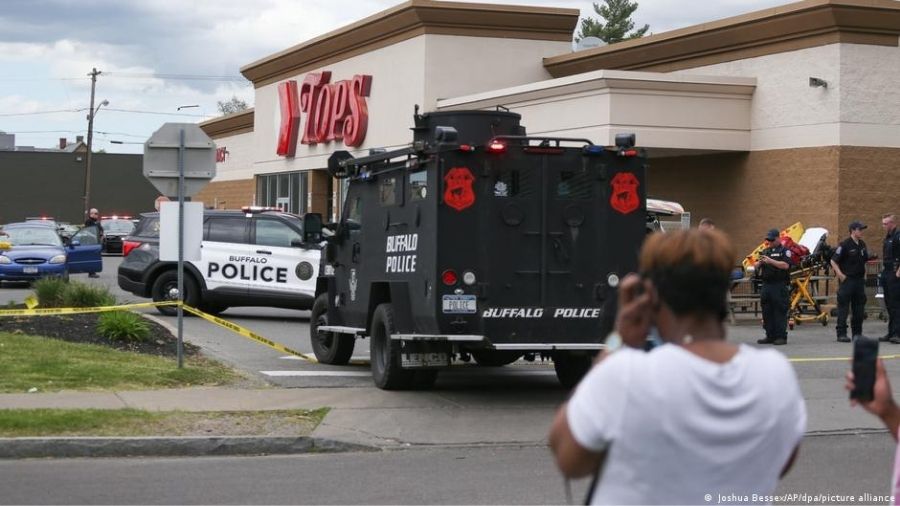 The accused gunman in the mass shooting in Buffalo had planned a prolonged massacre after attacking a Tops supermarket Saturday, according to the Buffalo police commissioner, who said that the attacker wanted “to continue his rampage”.

The commissioner, Joseph A. Gramaglia, told CNN on Monday morning that the suspect had spoken “about possibly going to another store”, after Tops, potentially turning his fire on “another large superstore”.

“He was going to get in his car and continue to drive down Jefferson Avenue and continue doing the same thing,” Gramaglia said.

Investigators are continuing to analyse the activities of the suspect, Payton S. Gendron, 18, who they said traveled halfway across New York, from his home in a small town near Binghamton, to shoot and kill black people in east Buffalo.

Indeed, he had picked the Tops store, the police said, in an area known for its large black population, going so far as to visit the neighbourhood the day before the attack in what they described as a reconnaissance mission.

Before his attack, the suspect is believed to have posted a lengthy, racist screed online, expressing admiration for other mass-shooting gunmen and a white supremacist ideology known as replacement theory, which imagines a nefarious scheme to “replace” white Americans — and voters — with immigrants or people of colour.

The theory, once confined to conspiracy theory websites and publications, has found a larger audience in recent years as prominent conservative commentators and lawmakers have helped spread it.

Ten people were killed in the Buffalo attack, including several older shoppers and a supermarket security guard. The guard exchanged fire with the suspect, who was protected by body armour and fired a semi-automatic rifle.

He surrendered to the police, and was charged with first-degree murder, to which he pleaded not guilty.

On Sunday, the police revealed that the suspect had been taken to a hospital for a mental health evaluation last June after making a threat at his high school.

He described the remark — about wanting to commit a murder-suicide — as a joke, according to a law enforcement official familiar with the case. He was released, Gramaglia said.

FBI officials, who have been combing the supermarket for evidence since the shooting, confirmed that the suspect’s remark had not caused undue alarm, saying he was “not on the radar” of federal law enforcement.

The shooting in Buffalo — New York’s second-most-populous city — has shaken and outraged many, including black residents who say they have endured discrimination and segregation there.

“Time and time again, they’ve shown nobody cares about us here,” said Marlene Brown, 58, who is black and lives not far from the Tops supermarket.