Anti-war stance in Russia leads to denunciations and arrests

In Russia, critics of the war in Ukraine are increasingly being reported to the police. DW spoke with some of them 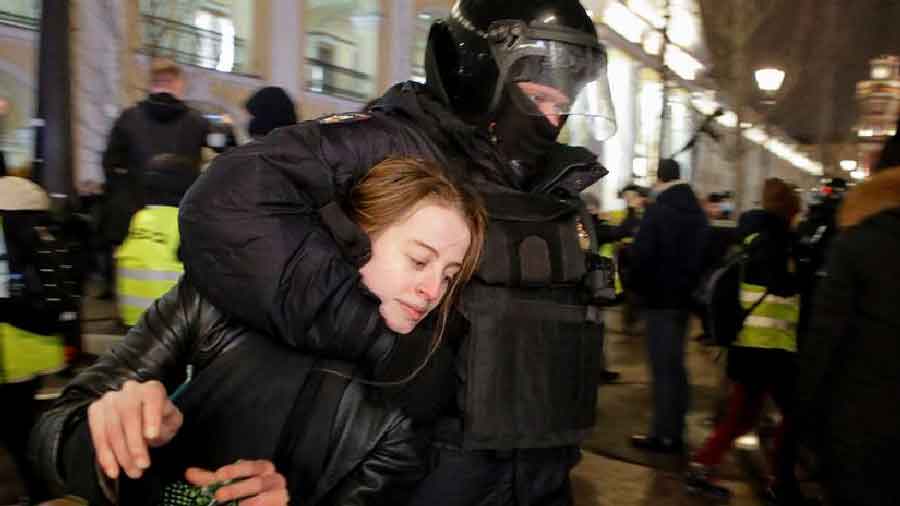 In the wake of Russia's February 24 invasion of neighboring Ukraine, some citizens have taken a stance against what they call an unjust war of aggression. As a result, they have suffered the consequences in a society where state propaganda is ubiquitous, the use of the term "war" is forbidden, and those who dare to speak out against the Kremlin's "special operation" face long jail terms. DW spoke to three individuals about their personal run-ins with authorities after being denounced by family, neighbors and colleagues.

'At the moment, a lot of people are going crazy'

When the "special operation" started, I was horrified and I wrote various social media posts against the war in Ukraine. One of my relatives, who is a big fan of Vladimir Putin, was quick to respond. He even has a portrait of Putin in his house — just like in schools and state institutions in Russia. He spammed me with all kinds of propaganda videos on WhatsApp. It was simply unbearable. At first I ignored it, then I contradicted him, and finally I just archived everything.

One day, the police knocked on my door. They said that there was a complaint against me and that I should come with them. At the police station, I was shown screenshots of my Instagram account and of my correspondence with this relative. Then the police officers asked, "Is this your relative?" I said, "Yes."

I learned that it was not the first time relatives had complained about people who were anti-war. The policemen admitted that they themselves were afraid of being sent to Ukraine. In the end, they let me go. But I've now changed the settings on my social media accounts so that my posts are only accessible to friends. The incident has unsettled me ever since.

It wasn't the denunciation that upset me but rather the fact that people are not willing to accept your opinion, and instead are ready to do anything they can to still change your mind. That is the most difficult thing.

I don't know anyone among my friends and colleagues who supports this "special operation” in Ukraine. Problems often arise with relatives who work in government agencies, watch state television and only know this one point of view.

The relative who betrayed me is now blacklisted on my WhatsApp list. But we continue to communicate. I am not someone who holds grudges. He just has a Soviet mindset and feels admiration for a certain kind of leader. I advise people who experience something like this to remain human. At the moment, a lot of people are going crazy, but you have to forgive them and not become like that yourself.

Even before the war, I thought about leaving Russia. I thought about going to Serbia. But I can't leave my family behind. They definitely don't want to leave. Somewhere deep inside me, I also want to stay in Russia. It is a beautiful country, but just not under this regime.

'My father reported me to the police'

I got a phone call from my aunt on April 10, saying that the police had come to our house and wanted to talk to me. She passed the phone to a policeman and he told me that my father had reported me — allegedly for writing posts against the war, discrediting the Russian army and calling for the killing of Russians. I did write several social media posts, but none called for any such action. While the policeman said my father was drunk, my aunt shouted in the background that he was an alcoholic after all.

By the time I got to the police station, the investigators were pretty annoyed by my father. The supposed proof was that someone from Thailand had allegedly called my father and told him about my posts. While I was at the police station, my father wrote me messages saying that he had been framed. The station chief eventually let me go.

The next day, my father called me to ask how I was doing. I said not very well because he had turned me in. He replied, "You weren't jailed, were you?"

I grew up with my grandmother and my aunt. I often visited my father when we were still in touch. In 2014, we watched the Olympics from Sochi together and also talked about Ukraine and the Maidan protest movement. Even then I had opposing views and argued with my father. However, he just laughed at my political views, but it was not aggressive.

He lived with us for a while and and I was really fed up with him. When I was 13, I ran away from home because he threatened to gouge out my eyes, and the police just never came. None of the adults ever wanted to believe me when I said he drank too much.

Now we have a situation in the country where there is war, terrible things are happening, and people don't want to see it because it is hard for them to accept it. I have a severe depression anyway, and now my personal situation is overlaid by the one in the whole country. I feel even worse. At some point I want to leave, but right now I don't have the means. People in Russia should be more careful, even when dealing with their own relatives because they, too, can report you to the police.

On February 28, I put two flags on my balcony on the 16th floor and painted one in Russian colors and one in Ukrainian. On March 2, I started to paste leaflets with the words "No to war" at the entrance of the house and in the elevator. By March 4, the police arrived. They said that neighbors had reported those flags and said that I was a terrorist. The policemen looked at the flags and that was it. After that, I continued to paste the leaflets, but someone kept tearing them down.

On March 20, when I was teaching at school, the police came to the principal. I had to go with them to the police station. Our janitor had sent the police photos from the surveillance cameras in the elevator of our apartment building. After a warning, I was allowed to go back to school. There, school authorities gave me paper and pen and told me to write my resignation. The principal said that if I was so against the state, then I shouldn't work for it, and the school was, after all, a state institution. Since then, I have been living on state handouts and am careful with whom I talk with about these issues.

I don't want to stay in Russia and I'm going to undertake something this summer so that my child doesn't go to school in Russia anymore. Of course, I explain to my daughter what is really happening in the country and in the world. I used to go to protests in our city so that she could have a better future.

At the moment I am completely confused, I have no savings and I don't know what to do.