Outpouring of grief over the killing of Sandeep Singh Dhaliwal, the first Indian American police officer in Texas 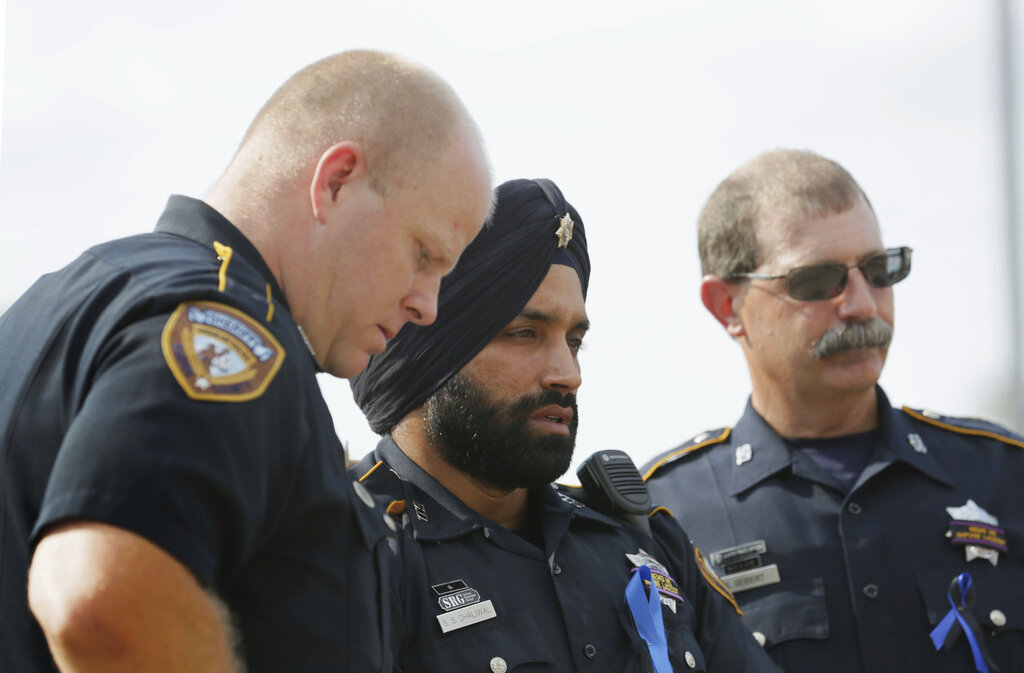 Lt Sandeep Singh Dhaliwal put the Sikh imperative of selfless service on display for all and touched a nation with his example, a senior US official has said, amid an unbridled outpouring of grief from many Americans over the gruesome killing of the first Indian-American police officer in Texas.

Dhaliwal, 42, who made national headlines when he was allowed to grow a beard and wear a turban on the job in the US state of Texas, was gunned down while conducting a mid-day traffic stop in northwest of Houston on Friday.

Dhaliwal's youngest sister Ranjeet Kaur joined the crowd and lit a candle for her brother. She remembered a man who loved his job.

'He was a really great person. He didn't deserve all this. He was a great person. He helped everybody. He never said no. He does as much as he can. I think this was the wrong time and the wrong place,' Kaur was quoted as saying by an US news channel.

Reacting to Dhaliwal's killing, US acting assistant secretary for South and Central Asia Alice Wells said, 'We mourn alongside colleagues, friends and family of Lt Sandeep Singh Dhaliwal, first Indian-American in Texas to serve as a police officer while maintaining articles of faith.

'Dhaliwal put the Sikh imperative of selfless service on display for all & touched a nation with his example,' she tweeted.

A 10-year veteran of the Harris County Sheriff's office and its first Sikh deputy, Dhaliwal was taken by helicopter to a hospital where he died, a decade after becoming the force's first Sikh and pushing for a historic expansion of religious rights in the department.

Dhaliwal worked with United Sikhs, a global humanitarian relief and advocacy nonprofit, to help organise the donation of truckloads of supplies for first responders after Hurricane Harvey.

'Sandeep was a trailblazer for the Sikh-American community. He served not just the Sikh community here in Houston with honour and dignity, but all of his community,' Bobby Singh, south-east regional director for the Sikh American Legal Defense and Education Fund said on Twitter.

Houston mayor Sylvester Turner called Dhaliwal 'a bold and groundbreaking law enforcement officer in the eyes of our county, our state, our nation'.

In 2012, Washington DC became the first major US police force to make explicit accommodations for Sikhs to preserve their appearance on duty.

'Community-led candlelight vigil was held tonight in honour of Deputy Dhaliwal. Please continue to keep his family & his Texas family in your thoughts & prayers. Deputy Dhaliwal was LOVED by this community,' County Major Mike Lee said in a tweet.

'A grateful community remembers fallen Texas Deputy Dhaliwal. This makeshift memorial is growing as a steady flow of people have come from throughout the community to show their support. Deputy Dhaliwal loved serving this community and they loved him back,' Harris County Sheriff Ed Gonzalez tweeted.

Starting as a detention officer in his late 20s, Dhaliwal was promoted to a deputy in 2015. The father of three young children was a practising Sikh.

In 2015, the Harris County Sheriff's Office made an official policy that allowed Dhaliwal to wear his beard and turban on duty.

'As a Sikh American, I felt the need to represent the Sikh community in law enforcement. It will give me the chance to open up the conversation,' ,Dhaliwal told a news channel at the time.

There are 25 million Sikhs around the world and about 500,000 in the US, according to civil rights group The Sikh Coalition.