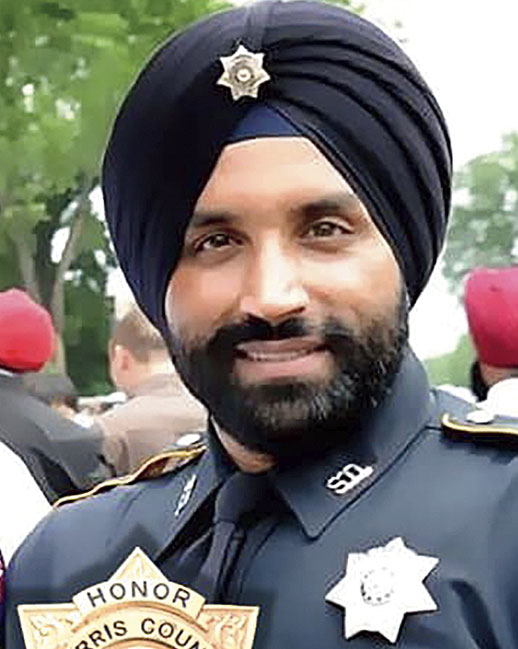 A sheriff’s deputy in Texas who was an observant Sikh and garnered national attention for gaining permission to wear a turban as part of his uniform was shot and killed on Friday near Houston in what officials described as an ambush during a traffic stop.

Maj. Mike Lee of the Harris County sheriff’s office said that the deputy, Sandeep Dhaliwal, made the stop at 12.23pm (local time), and that nothing appeared to be out of the ordinary.

The deputy was speaking with the driver for about two minutes and “it looked to be just conversational”, Maj. Lee said during a news conference, citing a review of dashboard camera footage from the traffic stop. “There was no combat, no arguing,” the major said. “It looked like a routine traffic stop that we conduct every day.”

The driver remained in the car. The deputy started to head back to his patrol vehicle, and within three to five seconds, the door on the driver’s side of the stopped car opened and the driver, brandishing a gun, ran up behind the deputy and “basically ambushed” him, shooting him in the back of the head, Maj. Lee said.

A woman doing yard work who observed the traffic stop heard two gunshots and saw the gunman flee, the major said. She called 911 and law enforcement officers descended on the scene.

Maj. Lee said officers obtained an image of the gunman from the dashboard camera video and circulated it. The gunman was found inside a business about a quarter of a mile away.

“A deputy observed that he looked a little nervous and put him in custody,” the major said. “And that did turn out to be our shooter.”

Late on Friday, the police identified the gunman as Robert Solis, 47, and said that he had been charged with capital murder. Solis had an active parole violation warrant for aggravated assault with a deadly weapon from 2017, Sheriff Ed Gonzalez said on Twitter.

A weapon believed to be used in the shooting was recovered. A woman who was a passenger in the suspect’s car was also taken into custody. There was no word on a possible motive for the shooting.

Dhaliwal got national attention in 2015 after the sheriff’s office allowed him to wear his traditional articles of faith, including a turban and a beard, while on patrol. Observant Sikhs wear turbans, covering their uncut hair. The Harris County Sheriff’s Office is the largest in the US to have “a full-time Sikh American officer”.