What governor told VC on phone

'Sir, if I were ruining the university, how is it doing so well in the national rankings.' said Suranjan Das 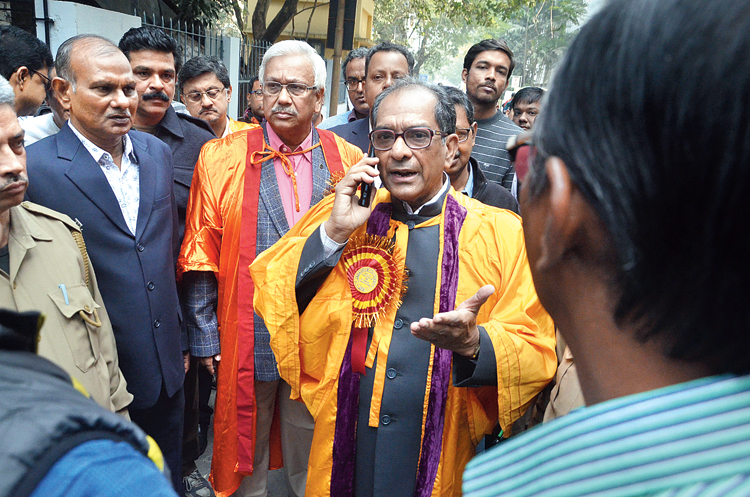 Jadavpur University vice-chancellor Suranjan Das speaks over the phone to governor Jagdeep Dhankhar, who was in his car about 100m away, surrounded by protesters, before the convocation on Tuesday.
Picture by Gautam Bose
Subhankar Chowdhury   |   Calcutta   |   Published 24.12.19, 08:32 PM

Governor Jagdeep Dhankhar on Tuesday accused Jadavpur University vice-chancellor Suranjan Das of “ruining the university” after Das failed to rescue him when he was surrounded by employees and escort him to the convocation.

Das replied: “Sir, if I were ruining the university, how is it doing so well in the national rankings.”

The exchange took place over the phone when Dhankhar, who is chancellor of the university, was seated in his BMW and surrounded by protesters shouting “go back”.

The VC, accompanied by university officials, was standing 100 metres away.

Only Das’s comments could be heard because the governor was speaking from inside the car. While the conversation was on, Dhankhar could be seen wagging his left index finger every now and then.

“The chancellor called me up once he was detained by a section of employees on the approach to the open-air theatre, the venue of the convocation. He entered (the campus) through gate No. 5 at 10.30am,” Das later told Metro.

“As I answered the call, the chancellor said ‘Why are you not coming here? How long should I wait?’

“I told him I was trying to reach him but the employees were not letting us through. Then I informed him that I had sent members of the court (the highest decision-making body of the university) so they could persuade the employees into withdrawing the protest.

“The chancellor insisted that I reach the spot at once to resolve the situation. I had to tell him that ‘I am trying to persuade the employees, but I cannot trample over their bodies. I cannot do that’.

“I listed the university’s ranking in the national institutional ranking framework, carried out by the Union human resource development ministry and QS rankings.

(JU was ranked 6th among the state universities; 14th in the engineering category and 13th in the overall national rankings.)

“He said ‘I know how to deal with you’ and told me that ‘you cannot continue with the convocation’.

“I told him ‘I am convening an emergency meeting of the court to decide the next course of action.We decided to go ahead with the convocation under Section 104(b) of the JU statute, which says ‘the convocation shall be presided over by the chancellor or in his absence by the vice-chancellor’, and sent a copy of the resolution to Raj Bhavan.”