A total of Rs 56,993 crore was allotted for panchayat, women and child development and social welfare, backward classes and tribal welfare and agriculture 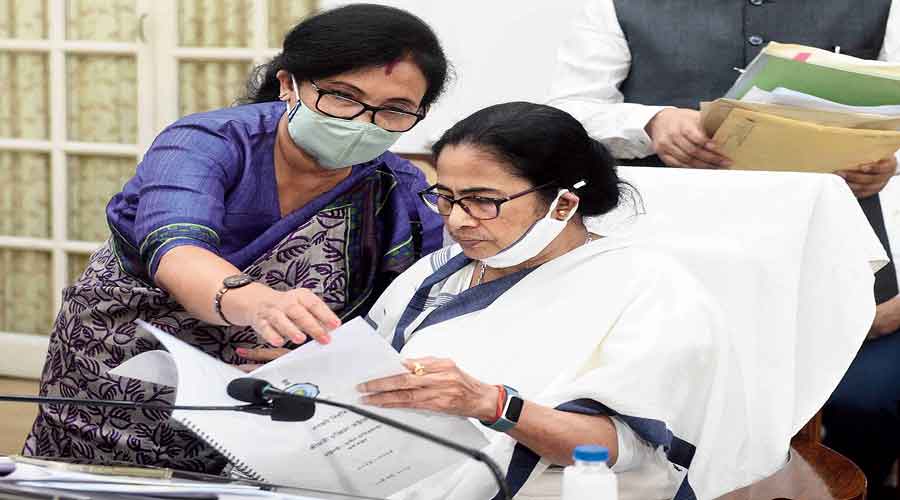 Chandrima Bhattacharya, the minister of state (independent charge) for finance, presented a Rs 3.21 lakh crore budget for 2022-23 on Friday with her focus firmly on continuation of the welfare schemes and their further extension to include more people.

The budget shows that the Mamata Banerjee government’s priority lies in ensuring social safety met for the poorest of the poor in the state.

“This is a Joy Bangla budget... This is for ordinary people, farmers, students, working class, women for everyone. This budget is aimed at ensuring social safety,” said Mamata at a news conference after the budget was presented in the House.

The chief minister’s claim was evident in the budgetary allocation as a total of Rs 56,993 crore was allotted for four departments — panchayat, women and child development and social welfare, backward classes and tribal welfare and agriculture. The state government runs majority of the welfare schemes, including Lakshmir Bhandar, Krishak Bandhu, old age pension, widow pension and sasya bima yojana (crop insurance), through the four departments.

Most of these welfare schemes are direct cash transfers to crores of beneficiaries.

“The state has allocated a sum of Rs 1,26,305 crore under State Development Schemes. Of which, allocating a sum of Rs 56,993 crore for these direct benefit transfer schemes captures the intent of the government,” said a finance department official.

The fact that the demand side stimulation approach of the government — by giving people cash in anticipation that people will spend and give the state economy a push — was different from that of the Narendra Modi-led Centre was mentioned in the minister’s budget speech which offered a critic of Delhi’s “failed policy of supply side stimulation”.

The attempt to create demand through government intervention was welcomed by industrialist Sanjay Budhia. “The budget is a positive pointer unveiling the growth agenda and unleashing the dormant growth potential of our state and citizens,” he said.

In her budget speech, Bhattacharya took care to underscore that the state government will include another 8 lakh widows under the widow pension scheme in addition to the existing 13 lakh beneficiaries. The state will spend Rs 960 crore to bring the new beneficiaries under the scheme.

According to sources, the state government will soon include more beneficiaries under schemes like Lakshmir Bhandar and old age pension as lakhs of applications have been received during the recently concluded third edition of Duare Sarkar camps.

Though the 151-page budget speech — Bhattacharya read only the first 10 and the last 4 pages of it — was replete with details of how the government's welfare schemes gave a new deal to people of Bengal, there, however, was no mention of any new scheme.

Absence of any new scheme, a source said, hinted that the state coffers were stressed due to the drop in revenue generation during the pandemic.

In the 2021-22 budget proposal, the state was supposed to generate Rs 75,415 crore but the revised estimate showed a shortfall of around Rs 1,600 crore. The revised estimate of non-tax revenues was also far lower than the target that former finance minister Amit Mitra had set for himself.

Sources in the finance department said that the chief minister restricted herself from announcing any new project considering the burden on the state exchequer and also considering the fact that there is no election this year.

Some new schemes may be announced next year ahead of the panchayat polls, sources said.

“This year’s budget is more about continuation as the government has steered clear of any big bang announcements... The increase in outlays for various departments or projected revenue targets are also modest,” said a source.

Keeping with Mamata’s philosophy of not adding any pressure to common people, the budget didn’t have any fresh tax proposals. It, however, offered some waivers for the realty sector, tea industry and green vehicles.