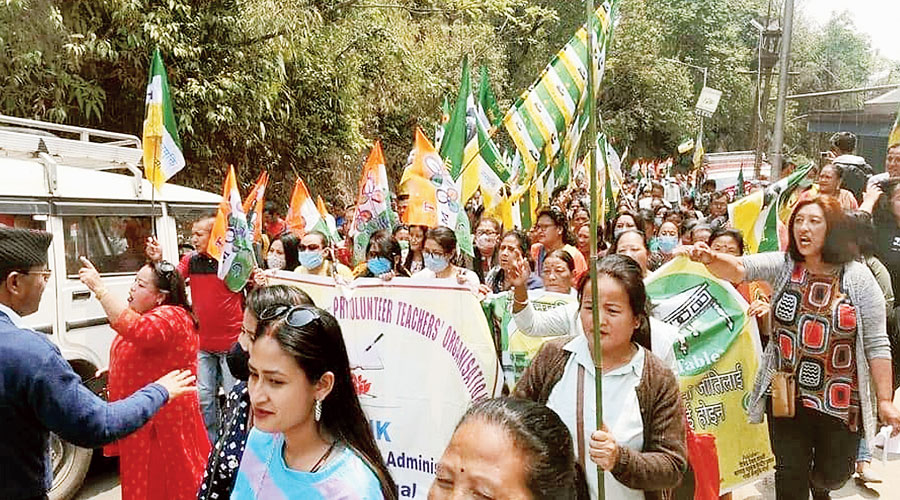 Unlike the rest of Bengal, the fate of four hill leaders who are not contesting the Assembly election will be at stake when Darjeeling votes on Saturday.

The political futures of Bimal Gurung, Binay Thapa, Anit Thapa and Mann Ghisingh are hanging in balance in this election, more than the party candidates that they have fielded in Darjeeling, Kalimpong and Kurseong Assembly seats.

Gurung is the founder president of Gorkha Janmukti Morcha. Tamang and Thapa formed a breakaway faction in 2017. Ghisingh — son of Subash Ghisingh who led the Gorkhaland movement in the 1980s and leader of the Gorkha National Liberation Front (GNLF) — currently heads the party.

No one knows which way the poll winds will blow this time.

This situation has come to pass in the Darjeeling hills because of a perceived sense of “leadership crisis in the hills.”

“Binay Tamang-Anit Thapa might have been in charge of the most important political setup in the hills, the GTA (Gorkhaland Territorial Administration), but they have not yet received the public’s mandate as they have lost back-to-back elections,” said a hill observer. 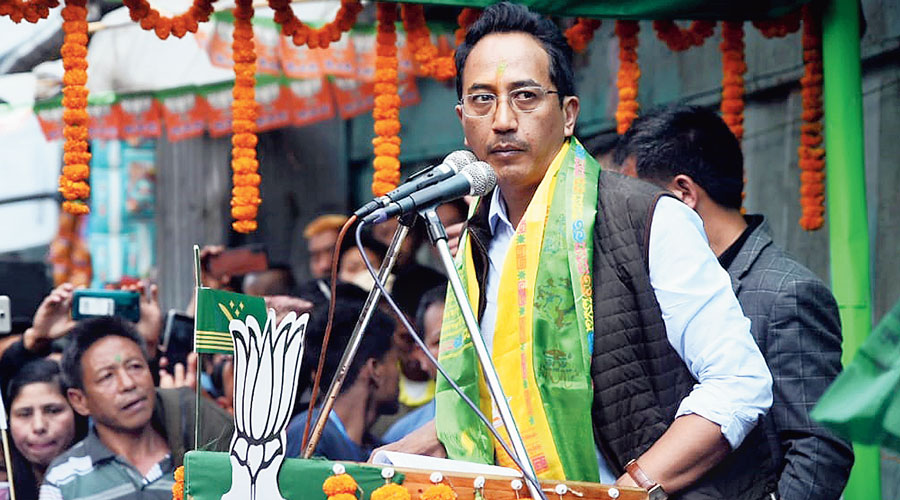 GNLF supremo Mann Ghisingh at a public meeting in Darjeeling, both earlier this month.
Telegraph picture

On the other hand, the BJP may have won both the Darjeeling Lok Sabha and Darjeeling Assembly by-elections in 2019 but in the hills the role of its MPs and MLAs is limited because of the GTA, the observer said.

“Moreover, Bimal Gurung had walked out of the BJP alliance last October (to join hands with Trinamul), which has further aggravated the leadership crisis. The hills are currently unsure who has

the mandate in this present political complication,” the observer added.

Sitting Darjeeling MLA Neeraj Zimba, who is a GNLF leader contesting on a BJP ticket, admitted that the Darjeeling elections were “not just about candidates.”

“This Bengal 2021 election is not just about the candidates. It is more about the party, the ideology and about our issues,” said Zimba.

“The future of Darjeeling is also dependent on the results of Bengal elections. If we (the BJP) win here and lose Bengal, it would be fatal. Even if we lose here but win Bengal that would make some sense for us,” Zimba added.

If there is a change of guard, there will be significant changes in the hills.

BJP leaders, including Union home minister Amit Shah and Darjeeling MP Raju Bista, have hinted that they would not carry on with the GTA if the saffron party comes to power in the state.

Thapa, who was recently replaced as chairperson of the GTA, following the model code of conduct requirements, has said that he would not like to go back to the

GTA as a nominated chairperson.

This essentially means that in the event of Trinamul retaining power in Bengal but Thapa’s party losing in the hills, he may be reluctant to head the hill body as a nominated head.

Moreover, arch-rival Gurung is also in alliance with Trinamul.

Among the two Morcha factions, one headed by Bimal Gurung and the other by Binay Tamang, the one winning this election can be sure of their political career as they would be seen carrying the hill mandate.

“The rivalry among these two camps is bitter and any party that loses this election will face a huge difficulty in reviving their support base,” said an observer.

“Any party that gets the mandate of the hill people this time will receive a head start in the future elections,” admitted a Tamang-Thapa camp leader.

The GNLF, which has been in political wilderness since long, has tied up the BJP and is also looking to revive its base in the hills.

“A lot depends on the outcome of this election, else we have to go back to our strategy rooms,” said a GNLF leader.