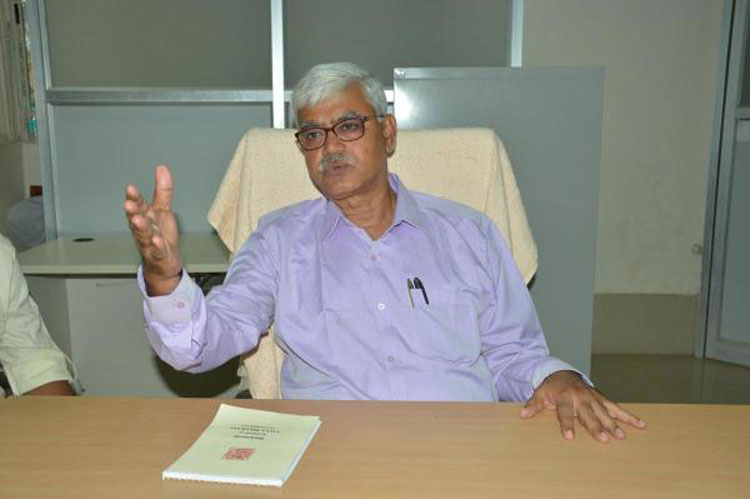 The order is being widely debated on the campus as it comes in the backdrop of recent controversies over vice-chancellor Bidyut Chakraborty’s Republic Day speech on constitutional amendments and the eviction of a student from the hostel for recording the VC’s address.
Telegraph file picture
Snehamoy Chakraborty   |   Santiniketan   |   Published 30.01.20, 07:47 PM

The Visva-Bharati administration has barred all employees from interacting with the media with immediate effect and asked them to air their views, if any, through the university’s officiating public relations officer.

The order, which warns of “appropriate action” in case of violation, has drawn sharp criticism from students, teachers and various teaching and non-teaching forums. They said the notification violated the constitutional provision of rights to freedom of speech.

“In the context of recent developments in Visva-Bharati, the notification is malicious and reflects the mala fide intention of the authorities. Students have already been victimised and now they want to stifle the voice of teachers,” said Rajib Ray, president of Federation of Central Universities Teachers’ Associations.

The order comes in the backdrop of recent controversies over vice-chancellor Bidyut Chakraborty’s Republic Day speech on constitutional amendments and the eviction of a student from the hostel for recording the VC’s address.

“All staff members of the university, both teaching and non-teaching, should air any public statement they may wish to the media through Shri Anirban Sircar, Assistant Registrar and In-Charge, Public relations in writing,” said the notification issued by officiating registrar Asha Mukherjee.

“To seek the public limelight and self importance through media for oneself is unworthy of any teacher or employee of Visva-Bharati. Visva-Bharati itself seeks no publicity. The genuine grievances of the staff would be sympathetically attended to by the concerned officers and the higher authorities and any one can reach the Registrar or the Vice Chancellor through the above officer(s),” the notification reads.

Repeated phone calls and text messages to Anirban Sircar went unanswered till filling of the report.

The faculty members and students said the order was an attack on the freedom of speech of teachers as they had voiced their opposition to several decisions of the university, including the invite to MP Swapan Dasgupta to give a lecture on the Citizenship (Amendment) Act, and the recent attack on hostel inmates.

The university has cited the Central Civil Services (Conduct) Rules, 1964, to invoke the ban. Several teachers’ organisations have said that the rules were not applicable for university teachers.

“The notification goes against Visva-Bharati’s act and statues. The central rules referred to is only applicable for central government employees, not teachers. Visva-Bharati is an autonomous institution that the then human resource development minister Prakash Javadekar had referred to,” said Sudipta Bhattacharyya, president of Visva-Bharati University Faculty Association.

The varsity mentioned in its order that “no staff members of the university other than ‘Social Media Champion as well as the spokesperson’ (Sircar) shall make any statement/views on the matters pertaining to the University to the Press Personnel of electronic/print media, without prior permission of the competent authority of the university as per Central Civil Services (Conduct) Rules, 1964”.

Others teachers’ organisations also criticised the varsity to curtail the right of speech of its teachers and other employees.

“This notification violates the right to freedom of speech. It is nothing but to stop voices of those who can oppose several malpractices in the varsity. However, the authorities can’t stop protest by issuing such bans,” said Kesab Bhattacharya, president, All India Federation of University and College Teachers’ Organisations (AIFUCTO).

“The VC wants the Constitution to be changed and before that he has embarked on the mission to curb the right to freedom of speech,” said Somnath Sow, a SFI leader.