A group of imams and muezzins visited 300 homes , including those of Hindu priests, with sweets and roses to spread the message of social harmony 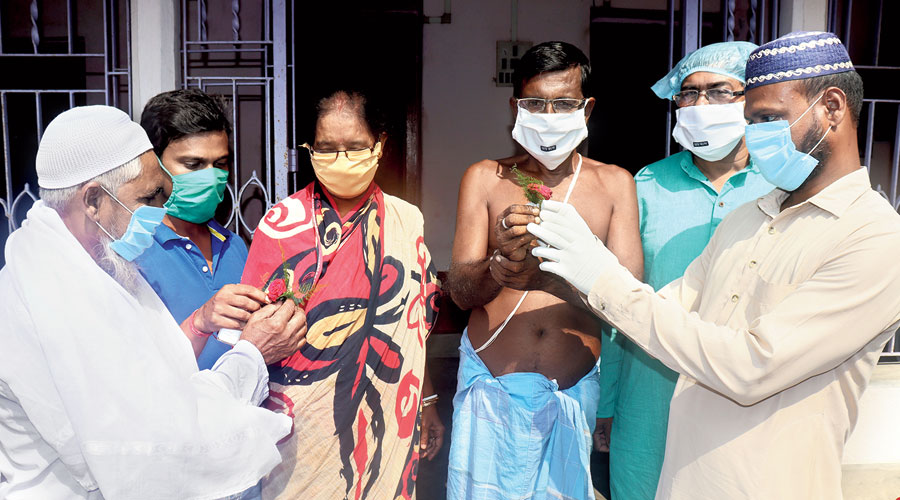 Vijaya Dashami, which marks the victory of good over evil, is also a time for guests and mishti mukh.

In Hooghly’s Goghat, this tradition received a unique twist on Wednesday. A group of imams and muezzins visited 300 homes, including those of Hindu priests, with sweets and roses to spread the message of social harmony.

The eight-hour-long event, an initiative of the Trinamul Chhatra Parishad’s Goghat unit, had a political intent as the ruling party’s student wing wanted to stem the impact of the “religion card” allegedly played by the BJP ahead of the Assembly polls.

The imams and muezzins distributed 2,000 laddoos and 500 roses among the families as they wished them on the occasion of Vijaya Dashami.

“As our area has been touched by BJP’s divisive politics, we thought of the need to send across the message that Bengal celebrates festivities irrespective of religion. A dozen Muslims, mostly imams and muezzins of local mosques, visited 300 families to wish them on Vijaya Dashami,” said Syed Ashik Hossain, the president of Trinamul Chatra Parishad in Goghat I block.

In the 2019 Lok Sabha elections, the BJP had made considerable inroads in Hooghly.

The BJP also set up organisations in various pockets of the district, including Goghat in Arambagh subdivision.

At every home, the visiting group of imams and muezzins enquired about the health and welfare of the families amid the prevailing pandemic.

After taking part in the event, Sheikh Abdul Malek, a muezzin of the local Sanbandhi mosque, said it was for the first time that he took part in such a project.

“I felt overjoyed,” said Malek. “The members of the families, including the priests that we had called on, thanked us for wishing them on the occasion of Vijaya Dashami. Such efforts are needed at a time certain forces are trying to create divisions among people,” the  muezzin added.

Sajal Goswami, a priest and a clerk at the local block land reforms office, was pleasantly surprised when a group of Muslims knocked on his door to wish him Subho Vijaya.