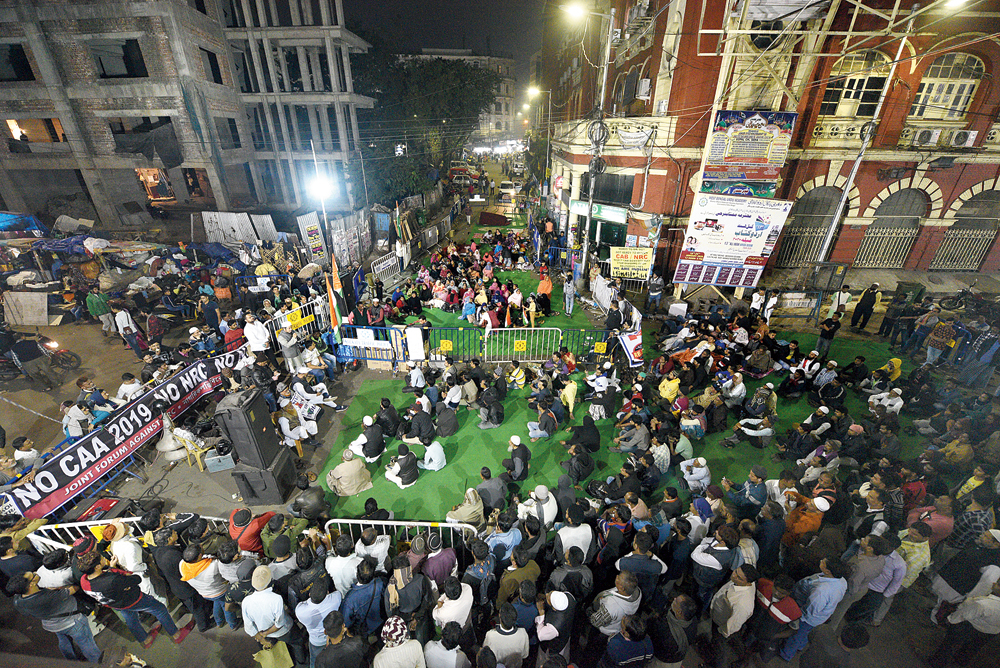 The question was whether they wanted to continue with the vigil near New Market after the Supreme Court asked the Centre to respond in four weeks on petitions against the Citizenship (Amendment) Act and adjourned the matter for five weeks.

The protesters in the heart of Calcutta had been out on the road for over 20 hours by then. They said they were prepared to spend days and nights under the sky till the CAA, the NRC and the NPR were rolled back.

It was then announced that the vigil would continue for at least a week at the location — the road between the Calcutta Municipal Corporation’s headquarters and Nizam’s restaurant.

“We would continue our vigil for a week for now. We would decide our next course of action later,” said Prasenjit Bose, a convener of the Joint Forum Against NRC, which had organised a rally on Tuesday from Ramlila Maidan to New Market that eventually led to the sit-in.

Late on Wednesday night, the protesters said police were trying to persuade them to move elsewhere. “The police told us to go to Ladies Park on CIT Road or to Park Circus. But we have told them that we would want a place in Esplanade,” Bose said.

A police officer said: “We are in talks with them. Let’s see.”

About 1,000 people were on vigil through Tuesday night and Wednesday morning; a large number of them women.

“We thought that if these people could spend the night under the sky, we should at least help them in whatever way we can,” said Mohammad Kasim, owner of the UP-Bihar Restaurant. Kasim said they had left the toilet of the restaurant open through the night for the women who were camping out.

“My husband is looking after our three-year-old son. They were here till midnight, then I asked them to go home. No mother would leave her child behind at home if the situation is not very serious,” said Dilshad Noor, a resident of Rajabazar.

“I will not move an inch till the Citizenship (Amendment) Act is rolled back. I read that Amit Shah has said he will not withdraw the CAA despite the protests. We want to tell him we would die but not go back home till the government rolls back this law,” she said.

Salmah Khatun, a homemaker from Rajabazar, echoed Dilshad. “This is our country, our land. Tell me how many people can show 70- or 80-year-old documents?” she asked.

When they heard about the court’s refusal to stay the act, they did not lose hope. “Some people are describing this as a victory for Narendra Modi and Amit Shah but that is not right. Do not lose hope. We would fight both in court and on the streets,” Bose said.

Many spoke from the dais. All repeatedly stressed that the act would hurt Hindus and Muslims alike. One of them told the gathering to “reach out to the Hindu brothers”. “The BJP and the RSS are clever. They are saying that Hindus and other minorities would be granted citizenship but not Muslims, which is a lie,” he said.