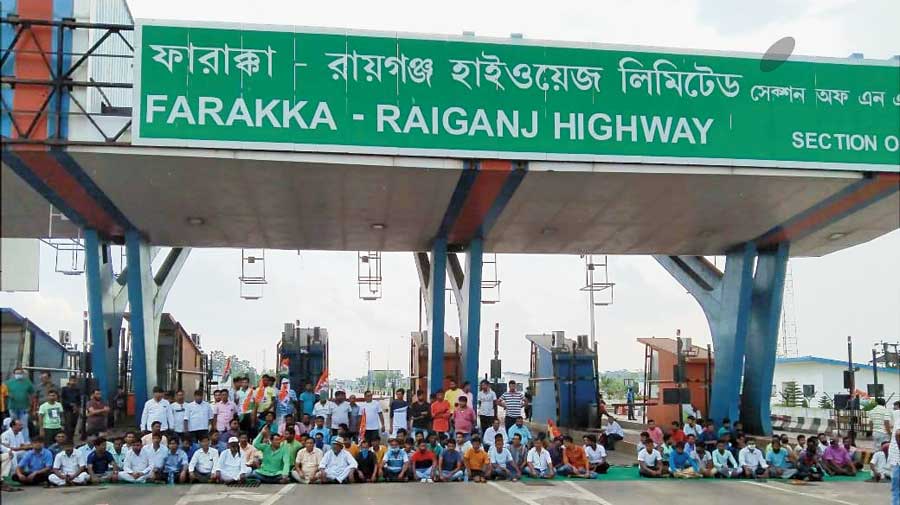 Trinamul leaders and workers demonstrate against the bad condition of the highway at the toll plaza in Baishnabnagar, Malda, on Wednesday.
Soumya De Sarkar
Soumya De Sarkar   |   Malda   |   Published 17.09.20, 03:08 AM

Trinamul supporters held a roadblock at the toll plaza on NH12 at Baishnabnagar in Malda for five hours on Wednesday to protest the bad shape of the highway’s 60km stretch.

The roadblock, NHAI sources said, led loss in their revenue as hundreds of vehicles passed through the toll plaza without paying charge during the agitation.

Raising slogans of “No repair, no tax”, Trinamul workers, led by the party’s district coordinator Amlan Bhaduri blocked toll gates from 11.30am.

Trinamul leaders in the demonstration alleged that the 60km stretch of NH-12 between Gazole and Baishnabnagar (Malda district) was dilapidated. The NHAI, despite collecting toll at Baishnabnagar and Gazole, did not heed the need for repair these last six months, protesters said.

“The NH stretch between Sujapur to the Kaliachak BDO is not commutable. The bypass connecting Jadupur in Englishbazar and Narayanpur in Old Malda is yet been fully functional. The condition of the NH is deplorable. The NHAI has been collecting taxes from two toll plazas. This can’t continue. That is why we held the demonstration,” Bhaduri said.

People supported the protest, because thousands bear the brunt of commuting on the damaged stretch.

Debarati Choudhury, a schoolteacher, who went to Calcutta by road recently, said: “It took nearly two hours from Englishbazar to Baishnabnagar (around 30km).”

Political watchers believe Trinamul intends to draw peoples’ support with the movement on the highway issue.

Earlier, Malda’s mango merchants had blamed the dilapidated NH12 for their losses.

“Trucks carrying mangoes could not reach the destinations on time because of the miserable condition of the highway. Many orders were cancelled for the delivery delay,” said Uzzal Saha, secretary, Malda Mango Merchants’ Association.