Twelve members, including two women, were held while they were heading towards BDO’s chamber for official formalities to apply for a no-confidence motion 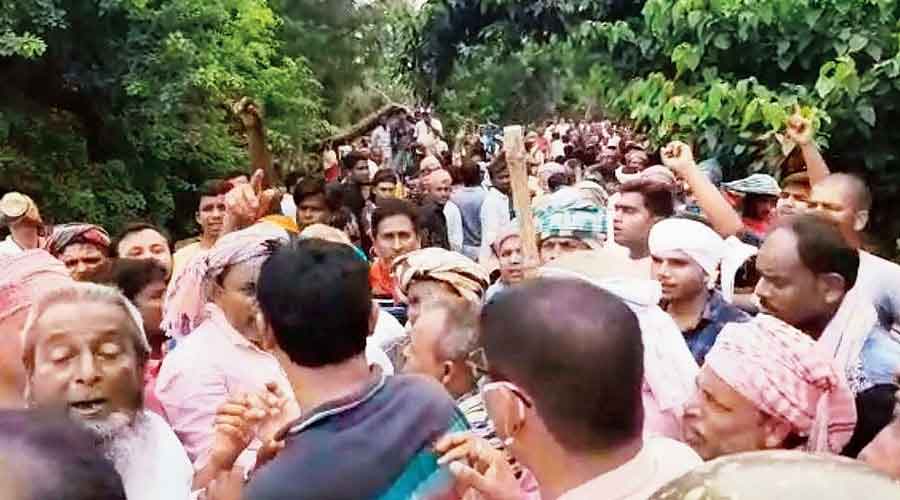 Trinamul supporters demonstrate in Harishchandrapur of Malda district on Tuesday after the kidnap.
Soumya De Sarkar
Malda   |   Published 28.07.21, 01:35 AM

Eleven elected Trinamul members of Daulatnagar panchayat, under Harischandrapur-II block of Malda, were on Tuesday morning allegedly abducted by two party leaders, including panchayat head Najibur Rahman, when they came to the BDO’s office to table a no-confidence against Najibur.

Twelve members, including two women, were apparently held at gunpoint while they were heading towards the BDO’s chamber for official formalities to apply for a no-confidence motion. One of the women managed to flee and she somehow reached home.

The whereabouts of the rest 11 members, including the other woman, are still not known.

As the news of this bizarre incident spread, hundreds of Trinamul supporters assembled in the area and blocked a road to demonstrate, alleging that Najibur and Ashraful Haque, the husband of the sabhapati (chief) of the Trinamul-run Harishchandrapur-II panchayat samiti of Daulatnagar panchayat, where Trinamul is in power, had abducted the panchayat members at gunpoint.

With the roadblock continuing for hours, a police contingent led by Sanjay Biswas, the inspector in charge of Harischandrapur police station rushed to the spot. It took over two-and-a-half hours for the police to persuade Trinamul workers, who were demanding immediate release of the abducted members, to lift the roadblock.

Protesters said that for the past few months, corruption charges were being levelled against Najibur.

“As a result, 12 other members of our party at the rural body decided to table a no-confidence motion against him so that he could be removed,” said Rajendra Ghosh, a local Trinamul leader.

“These 12 members had submitted a letter to the BDO citing they wanted to table the no-confidence motion. On Tuesday, the BDO asked all of them to personally come to him so that their signatures could be verified. As they reached near the BDO office around 9am, Najibur and Ashraful along with other hooligans held them at gunpoint and forced to get into vehicles. Then they were whisked away,” Rajamul Haque, another protester, said.

BDO Bijay Giri, when asked about the event, conceded that the panchayat members had been abducted by some “miscreants” from near his office.

“We have reported the incident to the district administrations and also to the police. CCTV footage of my office and adjoining areas will be checked to find out the abductors,” said Giri.

The police, sources said, are trying to trace the abducted members.

“Our investigations have started. We are also trying to identify the abductors,” said a police officer.

At the time of filing this report, none of the hostages had been released. Repeated calls by this paper to the cell phones of Najibur and Ashraful also failed to elicit a response. Their whereabouts are also not known.

The incident left district Trinamul leaders red-faced. “Our party does not approve of such activities. The incident is being viewed very seriously by the district leadership and leaders of the block have been asked to submit a confidential report on the entire issue,” said Dulal Sarkar, a senior party leader in Malda.

“It is the fallout of a tussle between two corrupt factions of Trinamul. Both sides want to make illegal earnings by using their position as elected representatives,” he said.