INTTUC supporters were apparently angry that the Delhi firm running the ICD was not hiring local truck owners, drivers and workers 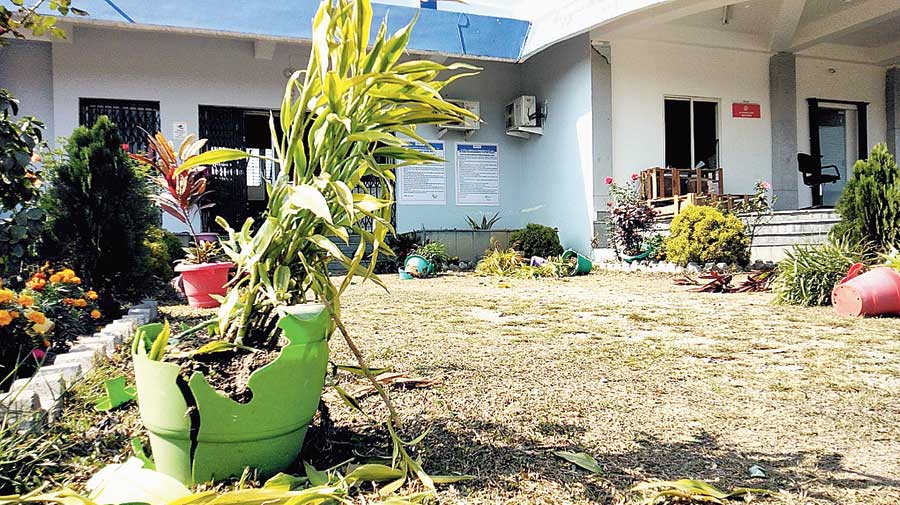 Broken flowerpots on Thursday outside one of the offices of the inland container depot near New Jalpaiguri station
Telegraph picture
Our Correspondent   |   Siliguri   |   Published 08.02.21, 01:43 AM

Trinamul leaders of Darjeeling district on Sunday expelled Prasenjit Roy, the INTTUC leader accused of leading the vandalism at the dry port or the inland container depot (ICD) in New Jalpaiguri last week, from the party and its trade union.

Speaking in the presence of state tourism minister Ranjan Sarkar, the Darjeeling (plains) district Trinamul president, said: “It was an undesirable incident. The chief minister has taken serious exception to it and our party has decided to expel him. From now on, Prasenjit Roy won’t have any connection with Trinamul.”

Arup Ratan Ghosh, the Darjeeling district INTTUC president, added that Roy — who was the INTTUC president of the New Jalpaiguri unit — was expelled. An eight-member committee has been formed to look into the affairs of the party’s trade union in the area, Ghosh added.

“Senior district leaders will monitor the trade union’s activities in NJP. We always work for the interests of workers but there is no place for violence,” added minister Deb.

The ICD is located in the Dabgram-Fulbari Assembly constituency of which Deb is the MLA.

Last Thursday, a group of around 300 supporters of Trinamul’s trade union front INTTUC, led by Roy, had barged into the ICD — a one-of-its-kind facility in north Bengal — and indiscriminately ransacked the offices of a private company that runs the ICD, along with vehicles and equipment, and damaged an office of the customs department on the premises.

INTTUC supporters were apparently angry that the Delhi firm running the ICD was not hiring local truck owners, drivers and workers. The vandalism occurred when chief minister Mamata Banerjee was in Siliguri. Many among the business community, including trade outfit members, pointed out that such incidents would discourage fresh investments in Bengal.

Acting promptly, the state government instructed the police to take all necessary steps against perpetrators of the violence. So far, 13 persons have been arrested. Roy is still at large.

A Trinamul leader said that the party has decided on a strict stand against troublemakers, including decisions like expulsion. “This is necessary as elections are ahead and there is always a chance that our political rivals will try to rake up the issue.”