'Didir Doot' was inaugurated on Saturday at Canning in South 24-Parganas, where Mamata Banerjee’s nephew and TMC heir-apparent Abhishek was present 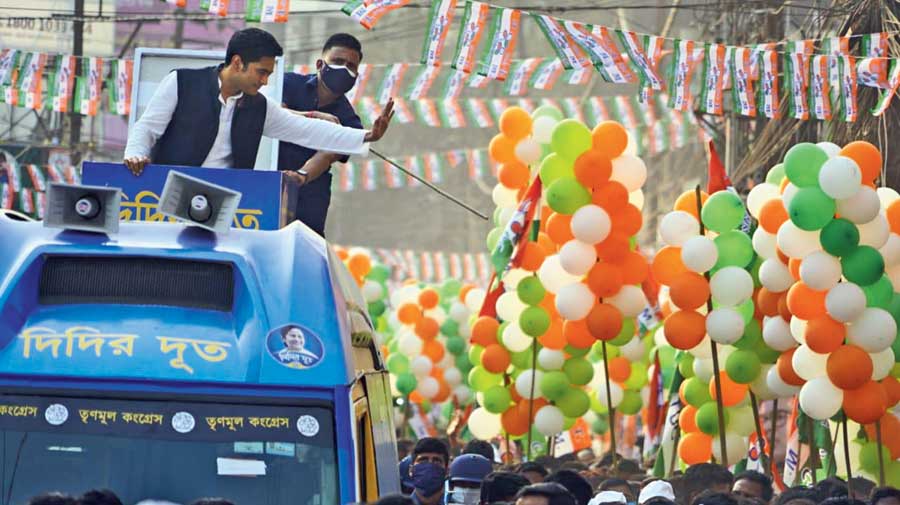 The buses have already been fielded in various districts and Trinamul’s campaign on wheels was inaugurated on Saturday from Canning in South 24-Parganas, where Mamata’s nephew and Trinamul heir-apparent Abhishek Banerjee took part.
Telegraph picture
Snehamoy Chakraborty   |   Calcutta   |   Published 15.02.21, 12:19 AM

The Trinamul Congress has rolled out over two dozen buses, with Didir Doot (Didi’s ambassador) emblazoned on them for road rallies.

The buses have already been fielded in various districts.

Trinamul’s campaign on wheels was inaugurated on Saturday at Canning in South 24-Parganas, where Mamata Banerjee’s nephew and Trinamul heir-apparent Abhishek was present.

Sources said this was aimed at countering the BJP’s ongoing rath yatra of five buses touring many of Bengal districts as part of the saffron party’s Parivartan Yatra to widen its reach ahead of the Assembly polls.

Trinamul’s blue buses with yellow outlines are painted with the Trinamul symbol and the smiling face of chief minister Mamata Banerjee. The tagline below the image reads Banglar Gorbo Mamata (Bengal’s pride, Mamata).

Sources said the buses were similar to those in the BJP’s yatra: air-conditioned and with a few seats and the option to get to the vehicle’s roof on a ladder.

Senior Trinamul leaders from Calcutta are slated to hold street-corners or roadshows on these buses with local MLAs and senior leaders.

Sources said the buses have QR codes and anyone can download the Didir Doot mobile application by scanning the code.

The application was launched earlier this month to connect the people of Bengal with the chief minister, a concept designed by poll strategist Prashant Kishor.

BJP leaders have criticised Trinamul for “copying” their idea. Trinamul leaders, however, said their buses were unlike the BJP’s as the latter’s vision was “polarisation”.