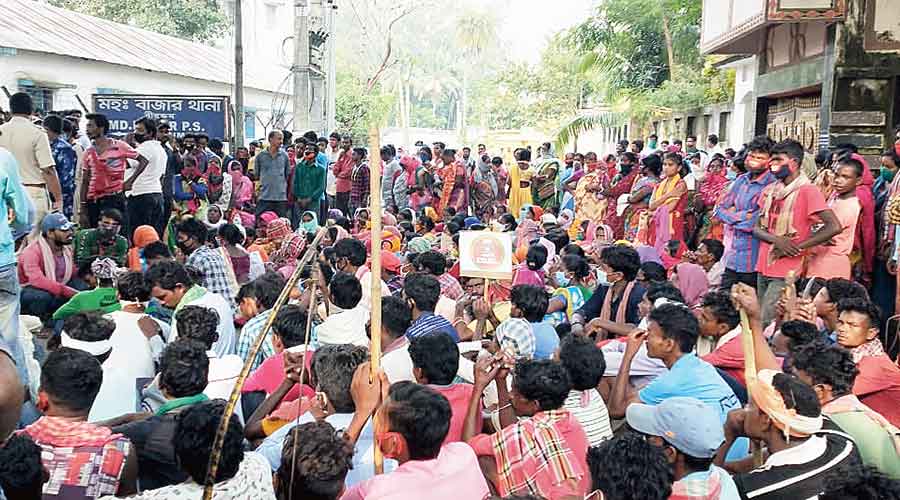 The agitation in front of the Mohammedbazar police station on Wednesday
Sourced by The Telegraph
Snehamoy Chakraborty   |   Suri   |   Published 10.09.20, 05:17 AM

Nearly 1,000 tribal people held a dharna in front of Mohammedbazar police station for around three hours on Wednesday to protest the Bengal government’s decision of setting up the Deocha-Pachami coal mine that would allegedly result in the eviction of the adivasis from the hamlets they had been living for generations.

The protest was held under the aegis of a faction of the Birbhum Adivasi Gaonta, a platform of tribal people, which is against the proposed coal mine. The government is keen on starting mining by early next year.

“We don’t want to be evicted at any cost from our land. We don’t want a coal mine in our area as our livelihood is already in crisis because of existing stone mines and crushers,” said a protester.

The government is betting heavily on the Deocha-Pachami coal block, located in Birbhum’s Mohammedbazar. The coal block is spread over 11,222 acres and has an estimated coal reserve of around 2.2 billion tonnes.

According to government estimates, the project can generate jobs for at least 1.5 lakh people and has the potential to act as an engine of economic growth for the entire south Bengal.

Chief secretary Rajiva Sinha, along with some senior officials, had landed in Deocha on July 9 and held a meeting with stakeholders and landowners expressing the government’s desire to start mining soon.

Sources had said the state was likely to kick off the coal mine’s operations early next year.

“At the July 9 meeting, local Trinamul leaders produced some people to discuss the issue of rehabilitation.... The original stakeholders weren’t, however, allowed to take part in the meeting. We don’t support setting up any coal mine at any cost,” said Sunil Soren, the convener of Gaonta, who led the agitation.

“We have also submitted a deputation to police, along with our other demands, including an end to police atrocities and halt to illegal stone crushers and mines,” he added.

District officials, however, said the government was planning to start the work of the coal mine from around 40 acres of land vested with it.

“There is no question of evicting any person in the first phase of the project. If any family is affected, we promise appropriate compensations,” said a senior official.