The ruling party which has never tasted success in Asansol, is pulling all stops to break the jinx 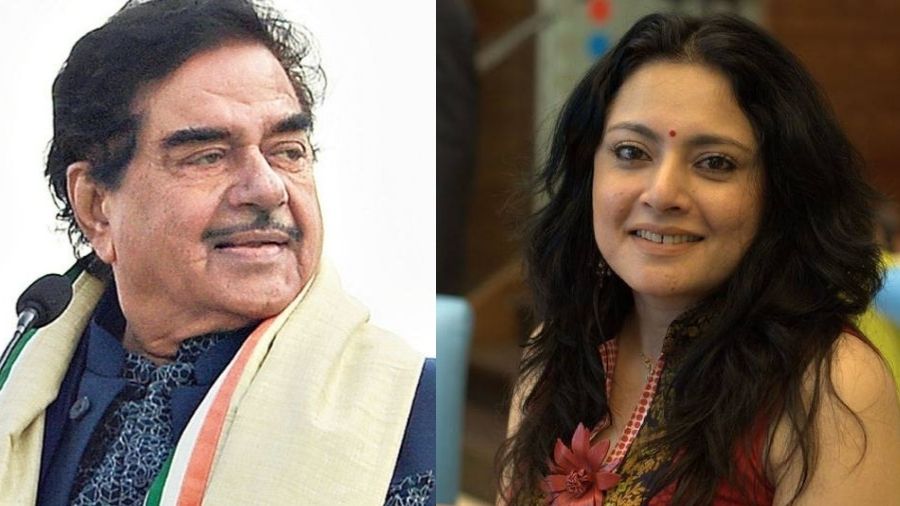 Hinging on actor-turned-politician Shatrughan Sinha's star power and appeal among the Hindi-speaking population, the TMC hopes to clinch the Asansol Lok Sabha seat, with the 'Bihari babu' trying to fight off the outsider tag in the industrial town.

The ruling party in Bengal, which has never tasted success in poll-bound Asansol, apart from four other parliamentary constituencies of the state, is pulling all stops to break the jinx.

"We are hopeful that Sinha, who is hugely popular among the masses, will be able to clinch the seat for us," V Sivadasan Dasu, Trinamool Congress Paschim Bardhaman convener, said.

By-poll to the Lok Sabha segment, scheduled on April 12, was necessitated as former Union minister and two-time MP Babul Supriyo quit the membership of Parliament last year after crossing over to the TMC from the BJP.

The saffron party, on its part, is trying hard to retain the seat that Supriyo had twice bagged for the camp -- in 2014 and 2019 -- as it fielded fashion designer-cum-saffron camp member Agnimitra Paul to counter Sinha. Supriyo, who left the BJP after being dropped from the Union ministry, is contesting on a TMC ticket for the Ballygunge assembly by-poll, to be held along with the Asansol election.

The Lok Sabha by-poll has rekindled the 'insider-outsider' debate, a poll plank that helped the TMC trounce the BJP in last year's assembly polls, with the ruling TMC at the receiving end this time as the BJP has gone all guns blazing to project Sinha as an "outsider".

An industrial belt known for its coal mines, steel industries and Chittaranjan Locomotives, Asansol in Paschim Bardhaman district is the second largest and most populous city of West Bengal after Kolkata, as per the 2011 Census.

Nearly 15 lakh electorate of Asansol are coal mine workers, factory workers, and small-time businessmen. About 45 per cent of the voters speak Hindi, and trace their roots to Jharkhand, Bihar, and Uttar Pradesh. The area also has around 15 per cent minority population.

According to TMC sources, nominating the two-time Patna Sahib MP, who has worked in Delhi for the better part of his political career, is part of the party's national outreach strategy.

Popularly called 'Shotgun' by fans for his straightforward dialogue deliveries in films, Sinha, who joined the TMC after his four-decade-long stint in BJP and a brief innings in Congress, however, rejected the "outsider" tag given by his rivals.

"I am no less a Bengali than any other Bengali. I am not an outsider. I have always adored Bengali language and Bengali culture. I have done many films in Bengal, and the Bengali language that I speak is not dubbed," Sinha, known for his signature dialogue 'khamosh' told PTI.

"Like my 'janmabhoomi' (birthplace) Bihar, Bengal has always had my heart," the former Union minister in Atal Bihari Vajpayee's cabinet said.

Countering him, Paul, BJP candidate and MLA from Asansol Dakshin, wondered what TMC would now have to say about branding BJP leaders from other states as outsiders ahead of last year's assembly elections.

"I was born and raised here. I am an MLA from this area. But the TMC candidate has no links with either West Bengal or this place. The TMC used to term BJP leaders 'outsiders' during assembly polls. They must explain this double standard," she said, exuding confidence that her party would be able to retain the seat.

A senior TMC leader, who did not wish to be named, said that the party fielded Sinha, in its bid to distance itself from the Bengali sub-nationalism poll plank, which is proving to be a hindrance in the party's national expansion plans.

"We had embraced Bengali sub-nationalism to counter the BJP in assembly polls. It is proving to be a serious problem now. By nominating leaders like Sinha, we are trying to give the party a pan-India appeal," he said.

The Asansol Lok Sabha segment has largely been a Congress stronghold until the late eighties. In 1989, however, it became a CPI (M) bastion. Tables turned in the 2014 Lok Sabha polls as people of Asansol voted for Supriyo, a political greenhorn back then, with the BJP securing the seat.

Supriyo, who had bagged 36.75 per cent vote share in 2014, retained the Paschim Bardhaman constituency in 2019 by increasing its vote share to 51.16 per cent. The TMC, however, made a steady and robust recovery in the industrial belt in the 2021 assembly polls as it bagged five of the seven assembly seats in the area.

The BJP, during its by-poll campaigns, accused the TMC government of neglecting the constituency, highlighting the coal pilferage scam which the CBI is investigating. The Mamata Banerjee-led party has claimed that the saffron camp is using the central probe agency to harass it party leaders over the coal scam.

Apart from BJP and the TMC, the CPI (M) and the Congress are also in fray.  CPI (M) leader Sujan Chakraborty iterated that there was hardly any difference between the ruling party and the main opposition camp of Bengal.

"People of Asansol will vote for us as Babul Supriyo's camp switch has proved that TMC and BJP are both sides of the same coin," he said. By-election results will be announced on April 16.