Advertisement
Home / West-bengal / There is only one Bengal, says Abhishek Banerjee

There is only one Bengal, says Abhishek Banerjee 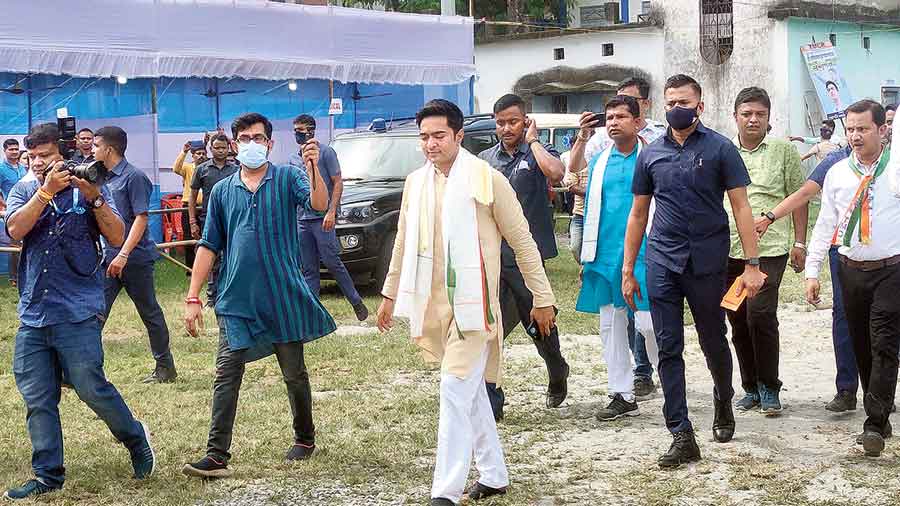 Trinamul Congress leader Abhishek Banerjee has said there is “one and only West Bengal” and the term “north Bengal” will be obliterated from the party’s dictionary.

“I do not prefer the term ‘north Bengal’…. There is no north or south Bengal here but one and only West Bengal. From today, this term (north Bengal) will be obliterated from our party’s dictionary. We will work together and take all steps to prevent the divisive forces which want to divide the state for political interests,” the Diamond Harbour MP told a public meeting at a football ground in Dhupguri, Jalpaiguri district.

Abhishek’s iteration of “one and only West Bengal” comes in the backdrop of demands by a section of BJP leaders for the division of the state.

The meeting was part of an initiative for the turnaround of Trinamul in three districts of north Bengal — Cooch Behar, Jalpaiguri and Alipurduar — keeping in mind next year’s panchayat polls.

“People here were aggrieved with us and even after the 2019 (Lok Sabha) elections when we could not perform well (BJP won seven of eight Parliament seats in north Bengal), we didn’t work and took people for granted thinking they would vote us in 2021. Time has come to make a

turnaround and reach out to these people with folded hands and soft demeanour to seek their support,” said the national general secretary of Trinamul.

Trinamul lost 16 of the 21 seats in Jalpaiguri, Alipurduar and Cooch Behar districts.

The party’s tally was zero in Alipurduar.

Abhishek said people of the three north Bengal districts could approach him through a helpline — known as “Ek Dakey Abhishek (Abhishek is a call away)” which was launched for voters of his Diamond Harbour constituency.

“From today onwards, Diamond Harbour is the same to me as Jalpaiguri, Alipurduar and Cooch Behar. Anyone from these districts can call me to file complaints or to report a problem,” he said.

“I have found that a handful of party leaders were standing as a wall between common supporters and Mamata Banerjee and I will dismantle that. Our leaders who couldn’t succeed in the elections here should abstain from lavish lifestyles. I am keeping a tab on all these aspects and will regularly visit the region in the next few months to find out whether our leaders are reaching out to booths,” the Trinamul MP said, amid loud cheers.

Bengal on Tuesday reported 2,659 Covid-19 infections, 983 recoveries and five deaths. Case positivity rate was 18.46 per cent on a day 14,406 samples were tested. The state has currently 25,880 active patients —  25,270 in home isolation and 610 at hospitals. According to a government bulletin, the recovery rate was 97.71 per cent and the mortality rate 1.03 per cent on Tuesday.Also, 95,725 Covid vaccine doses were administered in Bengal on Tuesday.