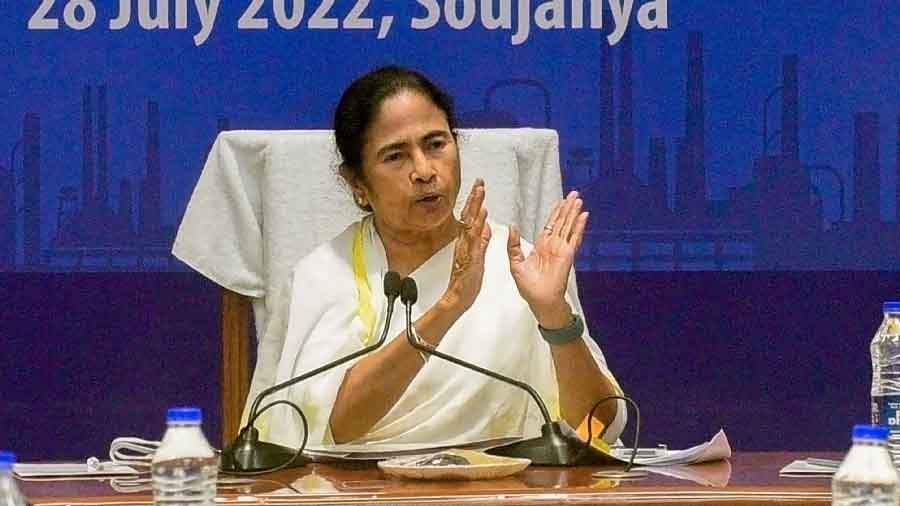 West Bengal Chief Minister Mamata Banerjee on Monday alleged that some political parties have only been trying to "create a negative image" of the state, ignoring the achievements made by her government, and a section of media, too, panders to these by giving out selective information.

Banerjee, during a programme for distribution of appointment letters to beneficiaries of Utkarsha Bangla scheme, said the critics "disregard the strides made by her government in skill development and MSME sector which employs over one crore people".

The scheme aims to impart skill-based training to youth, thus making them industry-ready.

The CM asserted that "employment rate decreased by 45 per cent elsewhere in the country during the COVID-19 pandemic in 2020-21, but Bengal was able to create 40 per cent more jobs at that time".

"We don't allow disruptions which hurt common man. A party which rules Delhi only wants disruption. Some of these parties never project achievements of Bengal. A section of media also does the same. Such attitude forbids dissemination of necessary information on ways we can help investors and entrepreneurs," she said, in a veiled dig at the BJP.

The CM, without naming any party, also launched a tirade against the erstwhile Left Front regime, accusing it of ruining the industrial environment in Bengal with its "disorderly politics during 34 years of its rule".

Talking about the growth of MSME sector in Bengal, she said that "currently 90 lakh enterprises are operational in the state, with 1.36 crore people as employees".

She noted that rural self-help groups have stitched five lakh school uniforms for students of state-run and state-aided schools.

"We are focusing on skill development which took new dimensions in the midst of the pandemic. Online-based home delivery services are employing many youths. We have to impart training to them and make West Bengal the front runner in this sector," she stated.

Banerjee also called for measures to make Bengal the number one domestic travel destination, suggesting that more home stays be created in places of tourist interest.

"If a TV set is not working, those trained in TV repair in our training institutes can be hired in apart from the mechanics that are into the business. That way, options increase for common people. Our Utkarsha Bangla scheme is aimed at doing that," she said.

Talking about the state's biggest festival Durga Puja, Banerjee said business of Rs 40,000 crore is generated during the festival, which creates sources of income for decorators, electricians, street vendors and artisans among others.

Insisting that her government was "industry friendly", Banerjee said, "We request all industries to come and invest in Bengal. We believe in generating employment."

She said that her government has rolled out a WhatsApp number, where the investors can inform about any issues confronted by them during investments.

"Bengal is set to have over 200 industrial parks, some of which have been established, while 2,800 companies have already registered their presence in the IT sector," she said.

She also pointed out that one lakh youth would be getting jobs at Deucha Panchami coal block, when it is commissioned, while the proposed freight corridor connecting Birbhum-Hooghly districts would also generate employment in the entire south Bengal.

"Some people are trying to derail the projects as they don't want Bengal to prosper. We want development protecting the interest of landowners, farmers. We have always given priority to the interest of farmers but we also want industries to grow," she pointed out.

At least 11,000 youth received appointment letters at Monday's programme, the CM said, adding that another 30,000 would be getting it at three other events that she was scheduled to address before Durga puja.