Forests are trying to trace origin and destination of smuggled seahorses, which are listed under the Wildlife Protection Act, 1972 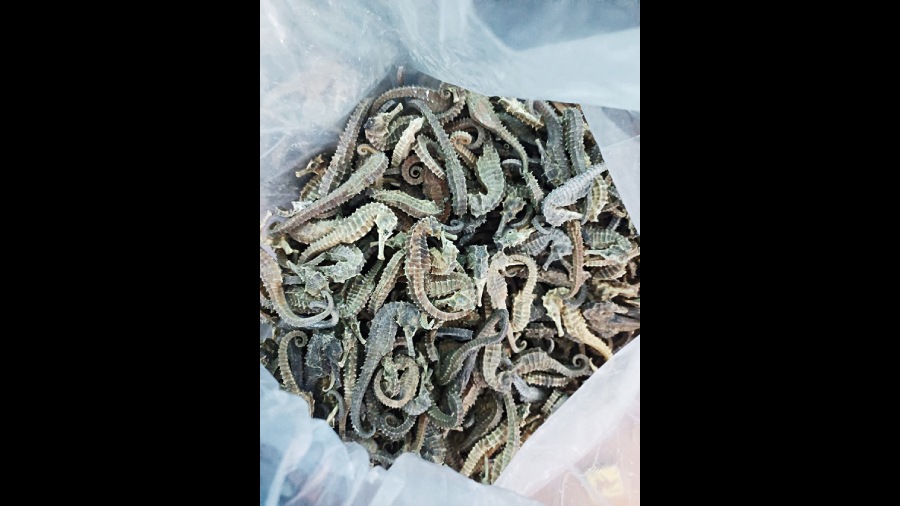 Seahorses have been found in north Bengal, months after hopping kangaroos and primates from the Amazon Forest were discovered, signalling a new pattern of trade in exotic animals through this corridor.

Five kilograms of dried seahorses, which are not found in this region, were seized from Naxalbari near Siliguri on Tuesday.

Forests are trying to trace the origin and destination of the smuggled seahorses, which are listed under the Wildlife Protection Act, 1972, and their worth in the market.

“Studies suggest that the largest importers of dried seahorses are mainland China, Hong Kong and Taiwan. Dried seahorses are considered a valuable marine product within the traditional Chinese medicine market,” said a forester.

The seizure in north Bengal has surprised many.

Rajendra Jakhar, chief conservator of forest (Wildlife-north) said: “We are surprised with the seizure of seahorses. As far as I remember, this is the first such seizure in our region.”

Over the past one year there has been a steady rise in rescue of exotic animals which points to a relatively new trend in this region.

In April last year, residents of Nepali busty and a team of Belakoba forest range had spotted three kangaroos on the southern fringe of Siliguri.

Kangaroos are not natives of the place and foresters believe that smugglers might have left the animal in the wild to avoid arrest.  A carcass of another kangaroo was also discovered in the area.

A few months later in November last year, primates smuggled into India from Myanmar, and while on their way to Gorakhpur in Uttar Pradesh in a car, were intercepted in Siliguri.

Foresters suspect rapid development in infrastructure in the region and its proximity to international borders might be fuelling this new trend of exotic animal trade.

“The person who was arrested with sea horses seems to be from north Bengal. We have to investigate his address as smugglers are known to carry false address proofs too,” said a forester.