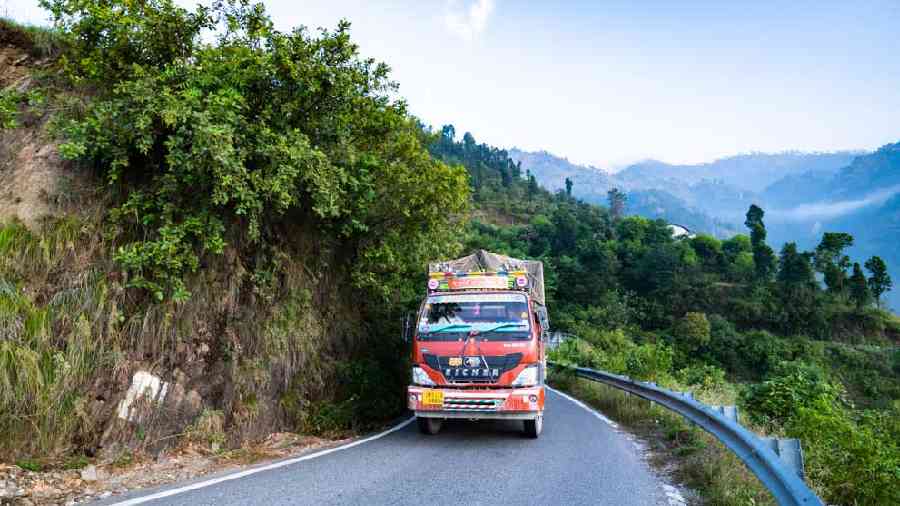 The new road was among 75 projects executed by the BRO and inaugurated virtually by Singh on Friday. The BRO functions under the defence ministry.
Representational picture
Our Correspondent   |   Jalpaiguri   |   Published 29.10.22, 08:11 AM

The new route was built by the Border Roads Organisation at a cost of Rs 350 crore over a period of six years. It will serve as an alternative road to reach Kalimpong and Sikkim and help defence forces, tourists and people in general.

NH10, the principal highway that connects these areas with the rest of the country, is prone to landslides which disrupt traffic during the monsoon. The new road was among 75 projects executed by the BRO and inaugurated  virtually by Singh on Friday. The BRO functions under the defence ministry. Jalpaiguri MP Jayanta Roy was present at a programme that was organised by the BRO and the GREF (General Reserve Engineering Force), a wing of the BRO, at Damdim in the Malbazar subdivision of Jalpaiguri district.

Residents of Sikkim and Kalimpong have been demanding an alternative route which can help them reach Siliguri and the Dooars without any hassle, particularly during the monsoon.

“In every rainy season, landslides occur along NH10, mostly between Sevoke and Teesta Bazar, and interrupt traffic for hours and even for days. The landslides cause huge inconvenience to people as they have to take turnaround routes to reach Siliguri or vice-versa. Tourists also face the problem while travelling to Sikkim and Kalimpong. This new road will largely help them,” said Roy.

The MP has also said along the Damdim-Algarah route,  there are a number of tourist  destinations like Gorubathan, Jhandi, Lava and Loleygaon.

“Now that the road has been readied by the BRO, tourists can easily reach these places. It will also increase the inflow of tourists in coming days,” he said.

The alternative road, which will join NH717 at Algarah, is important in terms of national security as well. NH717 is being built by the National Highway Infrastructure Development Corporation Limited from the Dooars to Sikkim bypassing NH10.

“Sikkim sits on the India-China border and there had been stand-offs between the armies of the two countries. Considering the vulnerability of NH10, an alternative road is necessary. It is good that a considerable stretch of the road is ready for use. It will help in the movement of defence forces and equipment,” said a retired army officer.