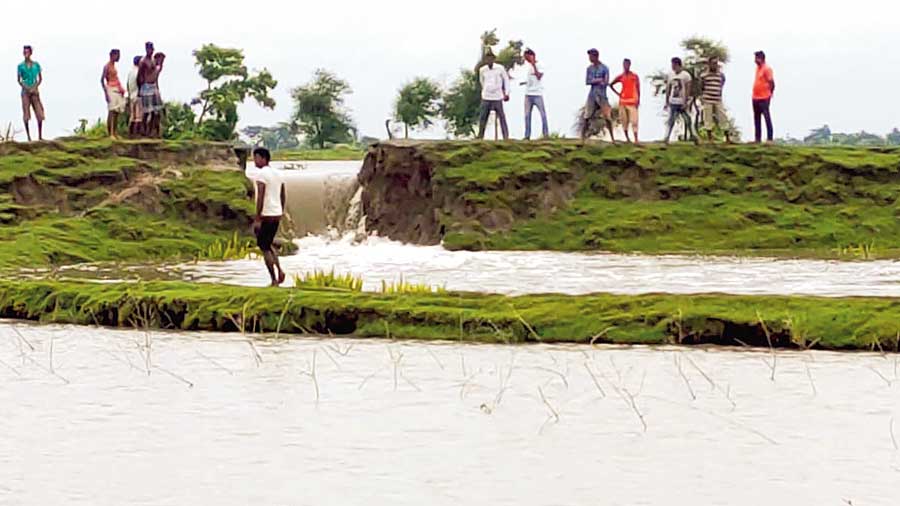 Several areas were inundated creating a flood-like situation in Minakha and Haroa block of North 24-Parganas and Roydighi in South 24-Parganas district because of overflowing of Bidyadhari and Mani rivers in incessant rain since the early hours of Thursday.

In Minakha and Haroa at least 15 villages were inundated at Bachra-Mohanpur panchayat when two stretches of an earthen dam over a 5-km stretch of the Bidyadhari were washed away.

The dam had suffered serious damage during Cyclone Amphan. The fresh damages caused on Thursday prompted the villagers to join hands with the local administration to undertake immediate protective work so that large tracts of agricultural land and fisheries, apart from residential areas, could be saved.

The 5km-long dam was built a couple of years ago to prevent saline water from the river reaching the adjacent agricultural land and fisheries.

Sources said vast agricultural land and fisheries suffered damage due to infiltration of saline water in several areas of the two blocks in Basirhat sub-division.

North 24-Parganas zilla parishad member Sanjoy Biswas said: “As an immediate measure to protect the area we have started to repair the dam using bamboo structure and sandbags. Major repair works to be executed later.”

Several areas in Roydighi in South 24-Parganas were inundated causing a flood-like situation due to high tidal waves that led Mani to overflow. The water entered Roydighi town inundating at least eight wards, including the main market.

In Sagar, several areas under Muriganga-I panchayat were inundated since a stretch of an earthen dam over Muriganga river was washed away in Kachuberia due to the river’s increased water-level.