Revamp plans for Jaigaon drawn up by Jaigaon Development Authority

For years, the demand to develop its infrastructure has been raised by the town’s business fraternity and residents 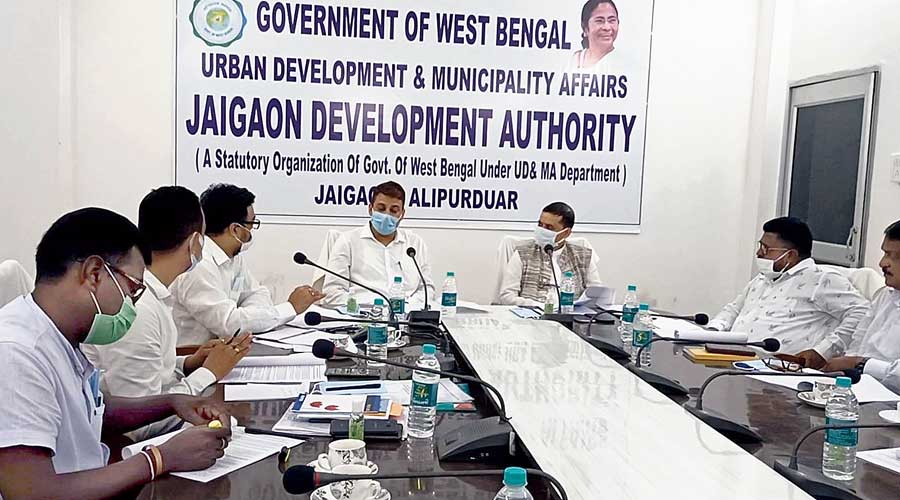 The newly formed board of the Jaigaon Development Authority (JDA) held its first meeting on Thursday and drew up plans for infrastructure development of the town on the India-Bhutan border and nearby areas.

The JDA is a development agency that functions under the state municipal affairs and urban development department and is tasked with the job of developing Jaigaon and surrounding areas.

Located in Alipurduar district, Jaigaon is next to Phuentsholing, the commercial capital of Bhutan. It is also along the most used road route to Bhutan.

For years, the demand to develop its infrastructure has been raised by Jaigaon’s business fraternity and residents.

“There is a stark difference between both sides of the border, as far as road, sewerage, drinking water, parking and others are concerned. We hope the JDA develops Jaigaon as an ideal border town,” said a senior trader.

On Thursday, Gangaprasad Sharma, the new chairman of the JDA, held a meeting with other board members. Surendra Kumar Meena, the Alipurduar DM, also attended the meeting.

At the meeting, it was decided that a new truck terminus will be built in Jaigaon through which hundreds of trucks can ply between the neighbouring countries. Also, 55 new rural roads and three new bridges will come up in and around Jaigaon.

Gourigaon, a scenic point near Jaigaon from where Bhutan hills and stretches of eastern Dooars can be seen, will be developed to encourage tourism

“We want to initiate a solid waste management system to keep Jaigaon clean. The local bus terminus will also be renovated. There are also some plans to beautify the town too,” said Sharma,  who is from Jaigaon.

Once the Alipurduar district president of BJP, after Assembly polls, Sharma joined Trinamul owing to differences with MP and Union minister of state John Barla.

After he joined Trinamul, he was nominated as the JDA chairman.

Political observers said that Sharma has to meet the aspirations of Jaigaon residents through development to draw support for Trinamul, a party that could not win in any of the five Assembly seats of Alipurduar.

“Civic and rural polls are ahead and the party is banking on him to revive its support base here,” said an observer.