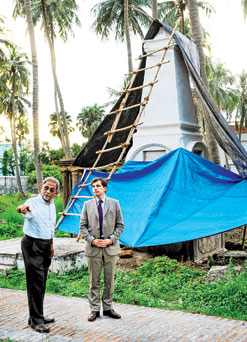 The ankle-high grass is gone, the undergrowth has been cleared and all the tombstones are visible. The next time you visit Chandernagore, you can actually walk into the French cemetery. The state Heritage Commission has started restoration of two of the heritage sites in Chandernagore, Laldighi being the second in line.

The cemetery was under Eglise St. Louis, the first church of Chandernagore, set up by Augustan monks in 1688. The French started settling in Chandernagore in the 1670s and gradually the town became the centre of French trade.

Across the road from the cemetery was Laldighi, by which stood Fort d’Orleans. According to the church authorities, by 1753 there were 4,000 Catholics in the area. When Robert Clive invaded Chandernagore in 1757, he razed the fort and with it the church to the ground. The present church was founded in 1875 as the Eglise Sacre Coeur (Sacred Heart Church).

“The cemetery is the resting place of several significant people. Among them is French commander Duplessis, one of the founding fathers of the French enclave, who settled here in 1673, and Henry ‘Storm’ Piddington, pioneering meteorologist who died in 1858,” says Neline Mondal, a local heritage enthusiast of Belgian descent who has done a census of the tombs.

Burials still take place in the cemetery which has around 150 tombs. “Of them 40 are of sculptural value. I will develop the place as a sculpture garden,” says environmental planner Parashar Basu, who is in charge of the project.

The base of each tombstone will be bordered with flowering hedges. Pathways of pebbles lined with brick would connect the tombs, allowing visitors to approach each resting place. Flower beds would be planted with seasonals like gladioli, tuberose and snapdragons so that the cemetery is in bloom round the year. It will be interspersed with areca palm.

The nondescript boundary wall along the road will be torn down and replaced with period grille over a one-foot toe wall. Climbing roses will be cultivated on it. “This way, the cemetery will be visible to passersby and the openness will help keep it free of nefarious activities.” Each tombstone will be lit up by concealed lights.

An eyesore of a water tank stands in an adjacent municipality plot. “I plan to cover it with flowering creepers like madhabilata.”

Once the Rs 36-lakh project is over, the cemetery will be handed back to the Sacred Heart Church.

After that, work will start on the four-acre Laldighi which faces the cemetery across Grand Trunk Road. A wetland of ecological importance, Laldighi had to its east the French Fort d’Orleans. In those days the Ganga flowed just beyond the fort where the cargo would be loaded in ships.

“Laldighi is in a sorry state,” says the planner. Towards the roadside, the bank has eroded. When I first visited the site, there were children defecating there. To the south, hutments are being built by dumping garbage in the water. There are around 200 encroachers. They rear pigs and wash clothes in the tank,” says Basu.

The mayor of the Chandernagore Municipal Corporation, Ram Chakrabartty, promises all help for the project. “I will remove the garbage vat and build a toilet there,” he told Metro.

Once the wild growth is cleared the water will be desilted and treated with micro-organisms. Soil-retaining plants will be planted to protect against erosion of the banks. Aquatic fauna — fish, zooplankton, ducks, etc — will be introduced in the water. The perimeter will be lined with lotus of several colours. Cascades or fountains will help in continuous oxygenation of the water. There are plans to build a jetty and a floating walkway on the water body. Basu also wants to develop the complex as a nature study park and leisure zone with facilities like paddle boats, angling, etc.

In the second stage of the green conservation project, Basu hopes to introduce avenues for sustainability. “Locals have to be involved so that there is a sense of pride and ownership. Policing cannot be the solution to maintain the sites.”

On his roadmap are floriculture at the cemetery and pisciculture in the tank, involving the Laldighi encroachers who would be trained.

Before Puja, the minister counsellor at the French embassy, toured Chandernagore in the company of Basu and Basabi Pal, associate professor of the department of French, Chandernagore Government College. “The French have an emotional connect with Chandernagore. With active maintenance and promotion, the town has great potential for tourism,” said Pal, who wants her francophone students to play a role in the town’s regeneration.

“Our aim is to showcase the history on the banks of the Ganga. Once the restoration is done, we will approach the tourism department,” said Shuvaprasanna, chairman of the heritage commission.