Forest dwellers along the proposed Sevoke-Rangpo rail route have demanded an early implementation of the Forest Right Act, 2006 that would provide them with rights to the land they live. 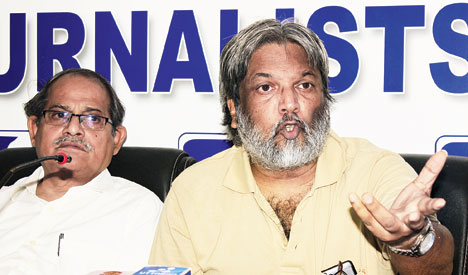 Siliguri: Forest dwellers along the proposed Sevoke-Rangpo rail route have demanded an early implementation of the Forest Right Act, 2006 that would provide them with rights to the land they live.

Also, once they have the land rights, they would be eligible to apply for compensation in case they have to part with the land for the rail project.

On Wednesday, representatives of the Himalayan Forest Village Organisation (HFVO) that has been working on the issue said here that around one lakh people, residing in 168 villages which are in forest areas, would be affected for the railway project.

"We have been living in these villages for generations but so far, land rights have not been granted to us. We are not against the rail project and are always ready to cooperate with the government and its agencies. But the state has to take necessary initiatives to grant us land rights. People of around 100 such forest villages of Alipurduar and Jalpaiguri districts have got their land rights a couple of years back," said Nilkumar Mangar, the convener of the HFVO.

According to him, residents of these villages earn living by farming or by working as drivers and daily-wage earners.

"We have been hearing individual claims and some of these have been accepted on principle. The concerned persons have been asked to come with some documents like land maps, which they can get from blocks, so that the issue can be resolved. There is no question of displacing any person or family," said an official posted in Darjeeling.

The railway project that was initiated on 2009 by then then railway minister Mamata Banerjee has suffered a setback due to a number of reasons, one of which is the land issue of forest dwellers.

For the project, railways need 98.94 hectares land. Only 2.77 hectares of this land is privately owned, while 18.4 hectares is with the government and around 8.49 hectares with the forest department for which the railways have got approval from necessary quarters.

"The remaining 77.77 hectares is where the forest villagers live. It is clear that they do not want to leave their land without compensation. There were some other issues which have been delaying the project but most have been sorted. It is not the task of the state and the administration to resolve this issue," said an observer.