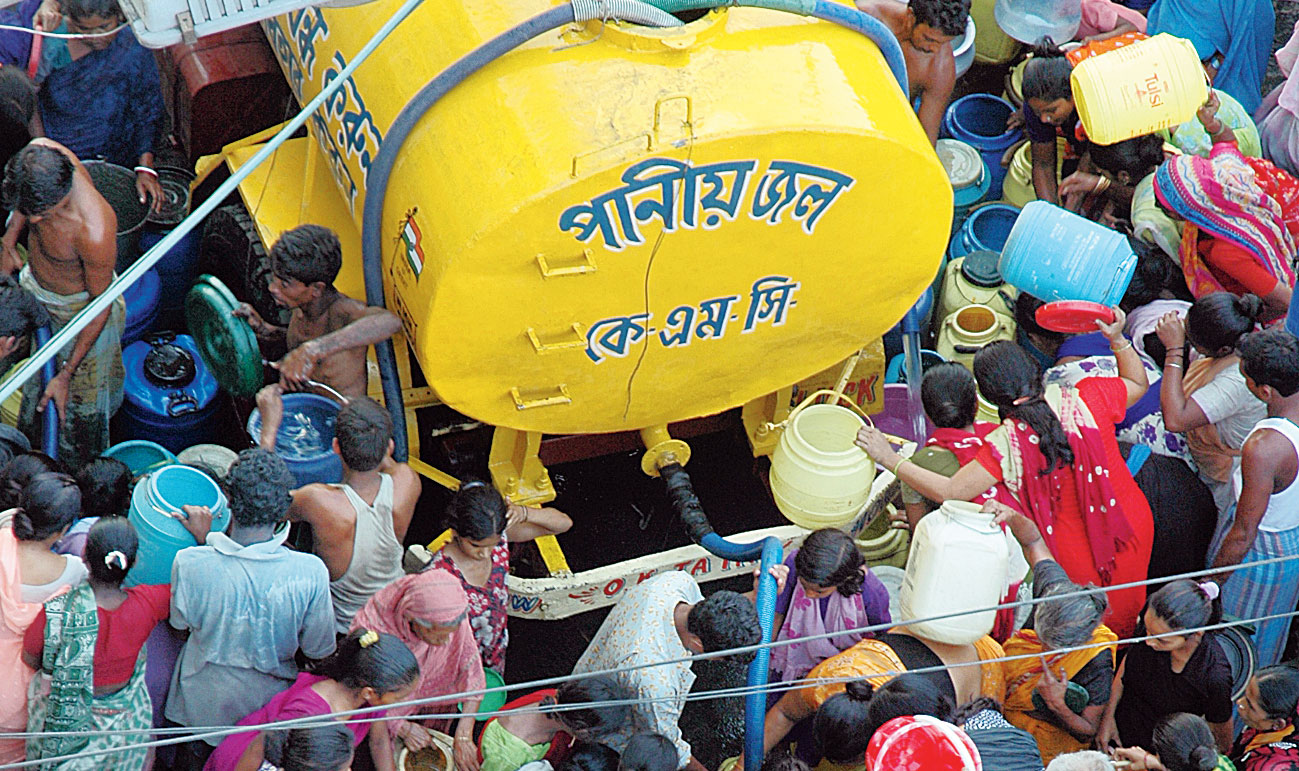 Extreme heat and the Ramazan month have increased the demand for water and civic officials said it was unlikely to end soon if the temperature didn’t slide and consumption came down.

The Calcutta Municipal Corporation (CMC) usually supplies 250 water tanks to water scarce pockets in central Calcutta during normal times. In the last few days it is sending about 425 tanks to these places, said an official.

The need for more water tankers suggests how the demand has picked up, partly because of rising temperatures. Sources in the CMC said that central Calcutta had very few water scarce pockets and the problem was more acute in south Calcutta and southern suburbs.

“The heat and the festival together have increased demand everywhere,” said one official.

But there is no equivalent rise in supply with the rise in demand. A CMC official said that the corporation didn’t have any mechanism to raise the daily potable water production in accordance with change in demand. A senior engineer at the CMC said there was no shortfall in supply. The five water treatment plants of the CMC — in Palta, Garden Reach, Dhapa, Jorabagan and Watgunge — together produce 464 million gallons a day.

Sources in the CMC said that increased water consumption because of the rising mercury was one of the reasons why several parts of the city, especially south and southern suburbs, were facing shortage of water. “When the same population starts consuming more water but the supply remains the same, there will be a shortage. In this heat, people are bathing twice or thrice every day,” said an engineer of the CMC.

The water tankers are sent to places with a history of less supply than demand and where shortage is reported. They are also sent to specific locations where there is an assembly of people during festivals.

Several residents from Kasba and Tollygunge told Metro about the water shortage they were facing.

A resident of Rochdale Co-Operative Housing Society Limited in Tollygunge’s Jubilee Park said that water shortage in their locality was an old problem.

“Everyday we have to check the water level in the reservoir twice or thrice before switching on the pump because the level of water in the reservoir is usually low. A few months back, the corporation installed a deep tube well at Graham’s Land, but even after that there has been no significant change in the condition,” said the resident.

On Thursday, residents of GS Bose Road in Picnic Garden protested against water shortage on Thursday, forcing the local councillor to reach the place and pacify the angry residents. “I told them that we are building a booster pumping station that would solve their problems,” councillor Bijanlal Mukherjee said.

This newspaper reported on Tuesday that the CMC was planning to build a water treatment plant at Dhapa and another in Birji, near Garia. The two together will treat 40 million gallons a day. Once the two plants are functional, the water shortage in Jadavpur, Garia and Tollygunge is expected to ease.