In Alipurduar, it rained close to 300mm till Tuesday afternoon, which caused water-logging in 12 of 20 wards in the town 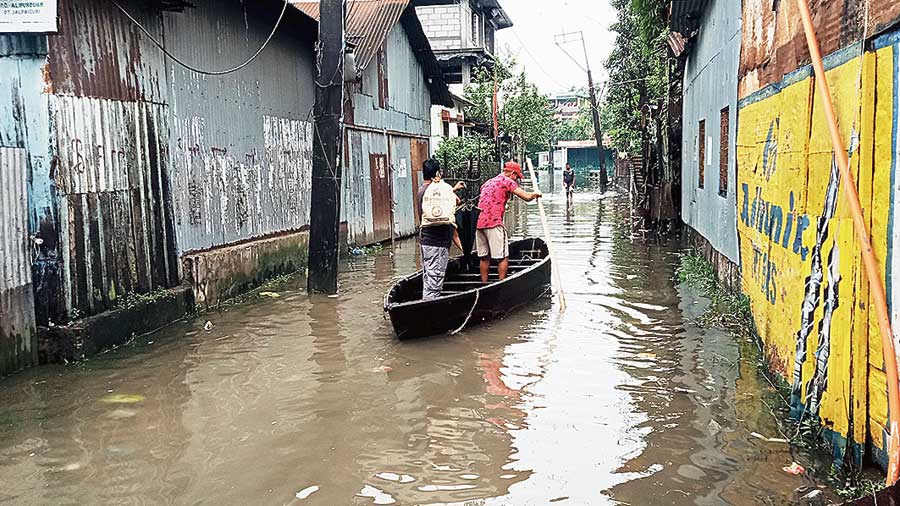 A sudden bout of heavy rain across the sub-Himalayan north Bengal since Monday night led to inundation in Alipurduar and Cooch Behar districts.

The rainfall has also triggered landslides in different locations of the hills and one such landslide halted traffic for around two hours on NH10, the principal highway to Sikkim.

In Alipurduar, it rained close to 300mm till Tuesday afternoon, which caused water-logging in 12 of 20 wards in the town. Over 15,000 people were marooned and more than 1,800 families had to shift to safer places as water entered their homes.

The water-logging also halted movement of private buses from the town as the bus terminus went under waist-deep water.

Such a situation made the district magistrate, SDO and the MLA of Alipurduar visit different areas of the town and take stock of the situation. “We have provided relief to over 1,800 people. Our officers are keeping a vigil,” said Rajesh, the SDO.

Water-logging was also reported at places like Hasimara, Samuktala, Kalchini and Hamiltanganj in the district. Communication between Alipurduar and Falakata got snapped as water from a stream started flowing over one of the diversions. Those travelling between the towns had to take a turnaround route via Pundibari.

In the hills, a landslide occurred in the Shwetijhora, a stream near Kalijhora that is about 25km from Siliguri. Traffic from Siliguri to Sikkim and Kalimpong was hampered because of the landslide.

Workers and excavators were engaged to clear the debris and traffic was restored around 9.30am. Also, minor landslides have been reported in some other areas of the hills.

In Cooch Behar, where it rained around 214mm, vast stretches of agricultural land went under water.

“Though no flood situation has been reported so far, we apprehend a huge loss in agriculture. We need to make the assessment of loss. Also, there had been water-logging at some places but the water started receding in the afternoon,” said an official in the district administration.

Met experts have pointed that the southwest monsoon was active in the region and was causing the rainfall. There is a chance of heavy to very heavy rainfall (from 70mm to 200mm), along with thunderstorms, in some areas of north Bengal in the next couple of days, they said.

In Malda, fresh erosion by the Ganga has been reported in the Koshighat area of Bhutni islet since Monday night. According to locals, around 150m stretch of the bank has been eroded by the river that is closer to the dyke now. The state irrigation department has engaged workers to use sandbags and tree branches to prevent erosion in the area, sources said.