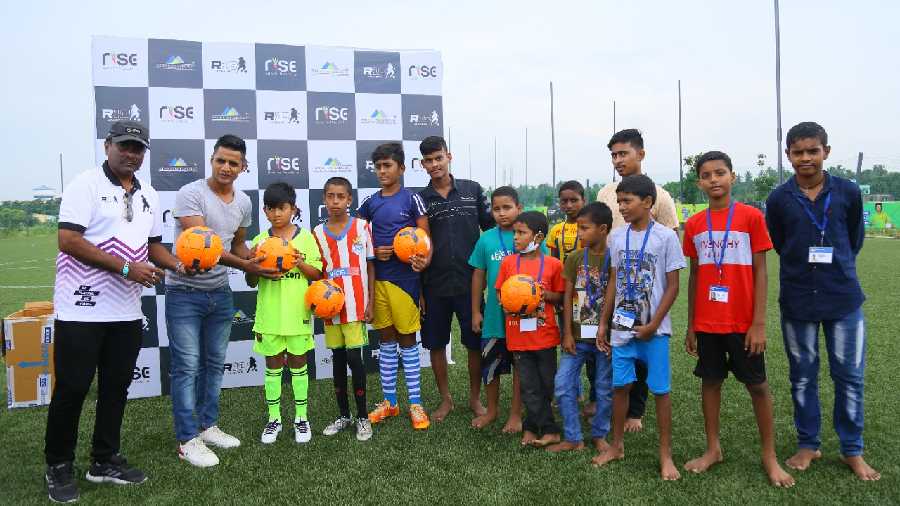 Ronaldinho Football Academy is finally here in Kolkata at Merlin Rise, the sports city in Rajarhat. So the eager wait of parents is over. R10 Academy under the guidance and mentorship of soccer icon Ronaldinho has announced its inauguration and admission procedure for its first centre in Kolkata, the City of Joy. The centre is set up at the sport-themed Greenfield township of Merlin Rise- the Sports Township at 6 Lane, Bishnupur, P.O & P.S: Rajarhat, Kolkata - 700135 Near Rajarhat Chowmatha Rajarhat.

On a formal occasion, famous footballer Mehtab Hossain presented football kits to the children of Mukti Rehabilitation Centre, an NGO based in Rajarhat working for the rehabilitation of substance abused children. Mr. Satyen Sanghvi, Director, Merlin Group was also present.

“Football is a popular game played by over 200 nations. There are many football academies in Europe and we need good football academies here. I thank Merlin for bringing Ronaldinho Football Academy to Kolkata. We hope kids to get trained here and talented players from  Bengal will get a chance to play in different tournaments”, said Mehtab Hossain, noted footballer.

The academy will conduct a three-day free coaching workshop for children between 4 and 17 years of age under the guidance of noted footballer Krishnendu Roy.  Over 200 children have registered for the free workshop.  R10 Academy will provide scholarships for one year to seven children under different age groups. Aspiring parents can contact at 03368090911 and their dream of getting their children admitted to The R10 Academy, can come to fruition.

R10 Academy is founded under the guidance of soccer icon Ronaldinho. This is the first academy in Eastern India and the second after Bangalore. R10 academy is a purpose-driven soccer academy that enables passionate and talented kids and youth to pursue football in equal measure with academics. The academy will provide techniques and skill-based training designed by the football star Ronaldinho.  It goes far beyond teaching how to obtain high performance in sport. R10 Academy is a training center that develops more capable, resilient, and winning children and adolescents in any area. A method with the trademark of excellence to be the best in the world. R10 Academy has an exclusive training system and a Virtues Program for girls and boys between the ages of 4 and 17.

The R10 football training ecosystem is designed to nurture footballers from initiation to realizing complete player potential. It brings best-in-class facilities, services, coaches, and opportunities to the students—the training programme exclusively designed by R10 academy under the guidance of visionary footballer Ronaldinho.

The centre in Merlin Rise, Kolkata will provide both outdoor and indoor training facilities to aspirants and will also appoint highly skilled coaches to train the players.  The selection of the best fleet of coaches has been monitored by the team of R10 Football academy under the guidance of Ronaldinho. The centre will be open to the students.

"We at Merlin are excited to get R10 Academy by the soccer icon Ronaldinho. Parents in our state have been waiting eagerly to bring back their children to the field especially after a hiatus of 2 years due to the pandemic. I am sure they will make a beeline at Merlin Rise to secure their kid’s berth at “The R10 Academy. I wholeheartedly thank Mehtab Hossain for gracing the formal inauguration of R10 academy ", said Saket Mohta, Managing Director, Merlin Group.

"Today a  formal inauguration of R10 academy has been done. R10 academy is holding a three-day long free workshop for interested kids. They will explain the modules and method of training to the children and then they may take admission here ", said Satyen Sanghvi, Director, Merlin Group.

“Football is the most popular sport in Bengal and parents in Bengal nurture their dream of getting their wards to play for the Indian team.  There is no dearth of talent but I sensed a sports infrastructure gap in Bengal.  There has been a dire need for identifying and grooming the talents from the grass-root level. This motivated me to set up a world-class sports infrastructure and sports academies of internationally acclaimed brands to nurture their talents. I strongly believe that The R10 Academy will nurture the talent pool of our state and take them to the next level to possibly represent the state or district or nation. We will try our best to provide assistance to The R10 Academy.  As a responsible corporate, we had a vision of setting up a project that would serve our society. Our dream is to create world-class footballers who can represent the nation, play in league matches, ISL, and even win more accolades in international tournaments," added Saket Mohta, Managing Director, Merlin Group.

The centre will strive to cover every dribbling skill as well as physical and mental development which will help the children to conquer any challenge in life. R10 Academy also will also provide a robust assessment system.