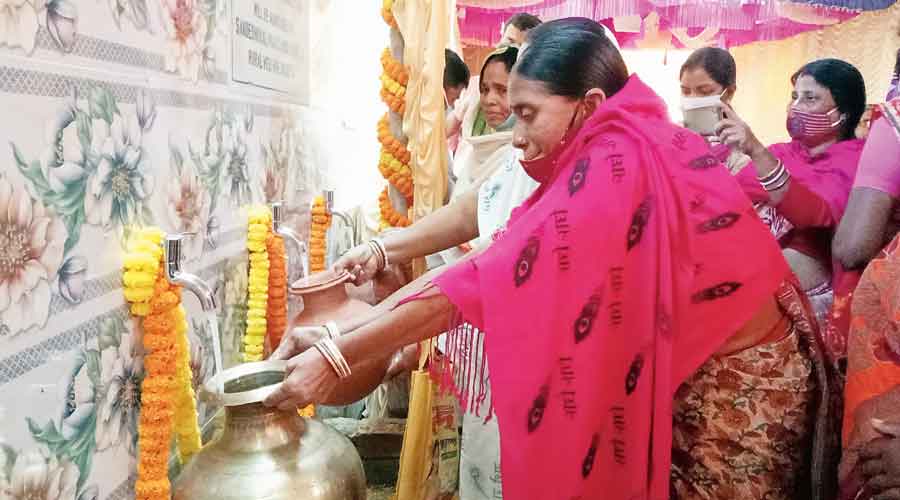 A woman fills her pot with water to mark the inauguration of the water treatment plant on Friday.
Pashupati Das
Subhasish Chaudhuri   |   Calcutta   |   Published 21.11.21, 04:08 AM

A mini-water treatment plant to supply purified drinking water in an area of the Sunderbans that suffers from high salinity in its groundwater was inaugurated on Friday.

Ncourage Social Enterprise Foundation, a subsidiary of Tata Chemicals, in collaboration with Rotary Club of Calcutta’s New Alipore chapter, and Maa Saroda Women & Rural Welfare Society of Sandeshkhali joined hands for the project at Dakhin Akhratala village of Nazat in North 24-Parganas to bring pure drinking water to around 2,000 families by purifying 1,000 litres of water per hour.

The mini-plant with 10 water supply output taps that costs around Rs 10 lakh was inaugurated by Rotary Club of Calcutta’s district governor Prabir Chatterjee.

Rotary Club of Calcutta’s New Alipore chapter president Sushil Agarwal said: “We first came to know about the problem of drinking water in the region from a report in The Telegraph. It was an emotional affair for us to launch it for the people.”

The Telegraph had reported how schoolgirls in the Hansnabad block of the Sunderbans pedal 12km every day to fetch water.
Homemaker Sephali Sardar, 40, said: “For the first time in our life we will be able to drink pure water from near our home.”

Subhasis Mondal, secretary of the Maa Saroda Women & Rural Welfare Society, said: “The TDS level in the groundwater in Nazat is 500 PPM, which is dangerous. Hope this initiative will save their lives.”