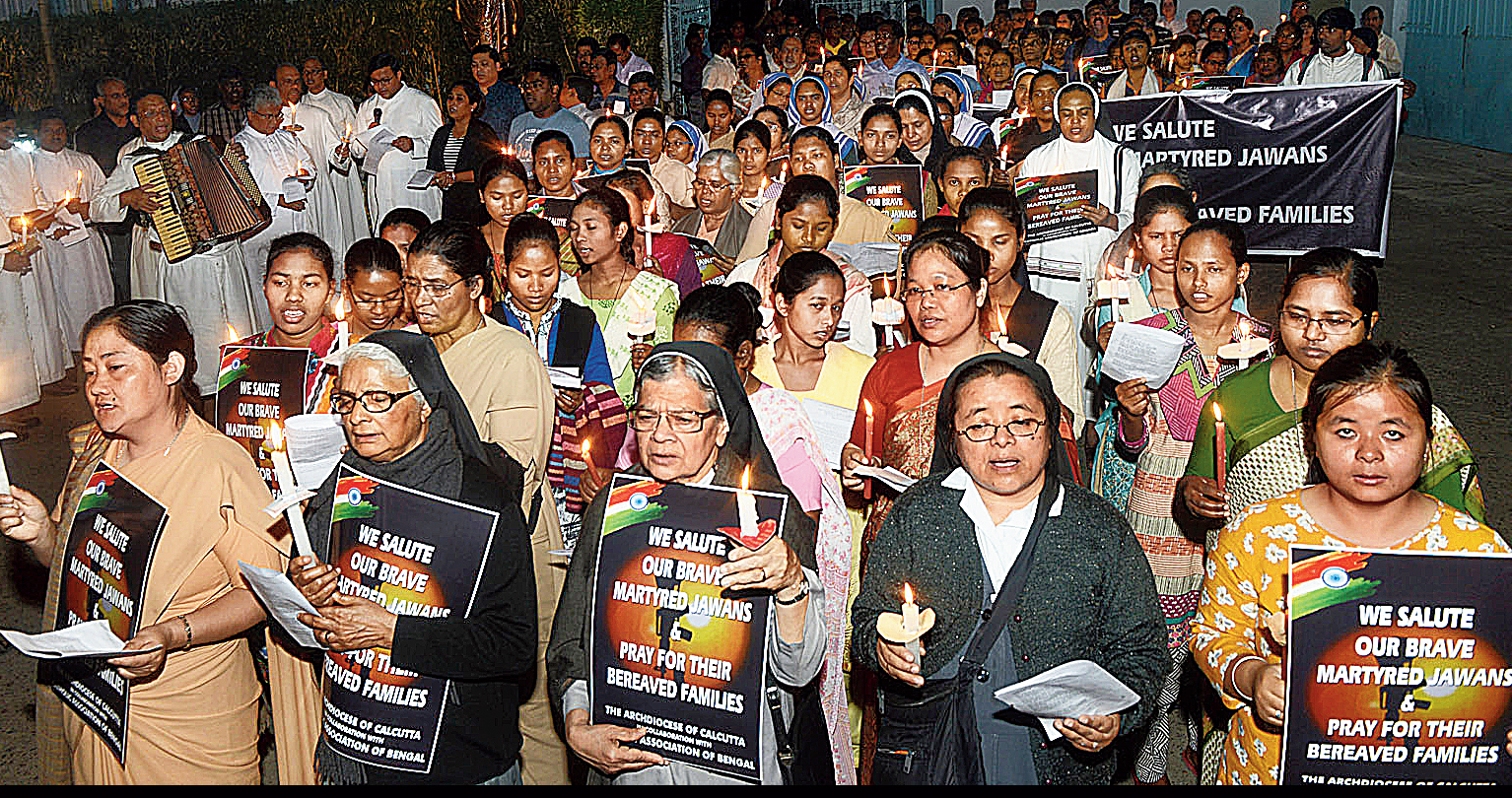 A peace rally by the Archdiocese of Calcutta on Monday to pay tribute to the CRPF troopers killed in the Pulwama attack on February 14
Picture by Bishwarup Dutta
Subhankar Chowdhury   |   Calcutta   |   Published 18.02.19, 09:15 PM

A teacher of DPS North Calcutta resigned on Monday after a backlash erupted over his Facebook post that he did not agree with the description of the soldiers killed in Pulwama as “martyrs”.

The history teacher, Chitradip Som, 36, said the school forced him to quit, his house was ransacked and group of people made him rub his nose on the ground.

In the post on Thursday, the day of the Pulwama attack, Som had said he was not in favour of calling as “martyrs” uniformed personnel killed while discharging their professional duty for salary. The post was deleted later.

On Saturday, Som said, a group people threatened him at his house in Bongaon, North 24-Parganas, and rubbed his nose on the ground. He added that on Sunday, a group that shouted “Jai Shri Ram” ransacked his house,

On Monday morning, Som said, he was called to the school in Dunlop on the northern fringes of the city and the authorities asked him to resign.

“The principal and few other officials asked me why I had posted derogatory comments…. They forced me to tender my resignation with immediate effect,” Som told The Telegraph. The teacher said he had been attached with the school for the past two years and was on probation.

The school denied the charge and said Som had resigned on his own after realising his mistake. “What he has posted is seditious in nature. This has belittled our armed forces, which this institution does not approve of. A teacher is not expected to do this,” said Sujata Chatterjee, principal of the school.

“We received a complaint about the post from a section of public. We called the teacher today morning and conveyed the sentiment of the institution. The teacher realised his mistake and tendered resignation on his own. No one forced him,” said Chatterjee.

A post on the school’s Facebook page stated that the school has taken “immediate punitive action against the concerned person”.

“As the management of DPS North Calcutta, we strictly condemn the act of Chitradip Som. We are very proud of our armed forces and the sacrifices they make for us. We as an educational institute do not endorse the views of Chitradip Som in any form and have taken immediate punitive action against the concerned person. And as such Shri Chitradip Som has resigned from our school,” the school’s post said.