Although issues such as water scarcity and Trinamul’s “misrule” came up in his address, the focus appeared to be on issues that can polarise the electorate 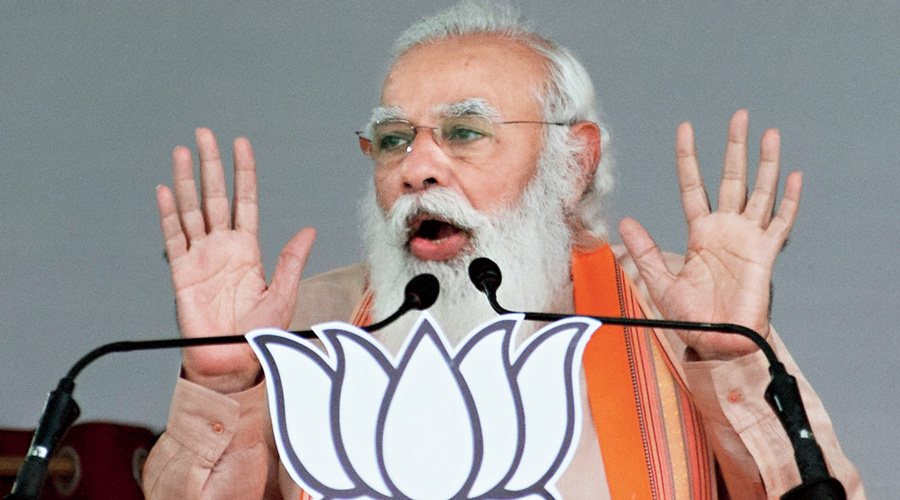 Prime Minister Narendra Modi on Thursday resurrected the Pulwama terror attack and the Batla House encounter, tiptoeing back to the polarisation path less than 24 hours after Mamata Banerjee had promised a universal basic income scheme if she returned to power.

“The people of Bengal have not forgotten who you stood with after the Pulwama attack and made allegations against the army,” Modi told a rally in Purulia, referring to Mamata’s questioning of the timing of the terror strike before the 2019 Lok Sabha polls. Forty CRPF soldiers were killed in the attack.

In the same breath, the Prime Minister mentioned the recent death sentence on Batla House accused Ariz Khan before asking why the Bengal chief minister had called the encounter a staged one.

“No one has forgotten how Didi and a few parties behaved when the Batla House encounter took place. These people stood with the terrorists at that time and raised questions about the encounter,” Modi said, referring to the September 2008 encounter during a Delhi police operation to arrest terrorists hiding in a flat in the Batla House area of Jamia Nagar in Delhi.

Although issues such as water scarcity in Purulia and Trinamul’s “misrule” came up in his address, Modi’s focus appeared to be on issues that can polarise the electorate.

So far, any mood in favour of muscular nationalism as seen after the Pulwama attack and the retaliatory Balakot air strike on Pakistan has not been evident in the Bengal Assembly elections.

Modi accused Mamata of encouraging infiltration for the sake of vote-bank politics. Without mentioning “Jai Shri Ram”, the Prime Minister reminded the audience how certain slogans had raised Mamata’s hackles in 2019.

“The people of Bengal remember how you got off your car and scolded people and asked the police to catch them for no fault of theirs,” he said.

In his address at one of the most backward areas in Bengal that has a high concentration of tribals and OBCs, Modi said: “I know how the rights of the tribal and OBC youths from this area were robbed as she engaged in appeasement politics and passed the benefits on to others.”

BJP sources speculated that Modi might have been referring to how backward Hindu communities such as the Mahisyas and Telis had been left out of the list for OBC reservation. The issue had first been “flagged”, according to the BJP, by the party’s national chief J.P. Nadda while addressing a poll rally in Bankura’s Kotulpur on Tuesday.

Trinamul’s electoral manifesto, which Mamata released on Wednesday, includes a promise to set up a special task force for the inclusion of castes like Mahisya, Teli, Tamul and Saha in the OBC list.

Modi said Bengal’s voters had made up their minds to usher in change and claimed the success of his Brigade rally on March 7 had made Mamata nervous.

“Whatever is happening after Calcutta’s Brigade rally, you can see it and the country can see it. After 10 years of appeasement and hitting the people with sticks and batons, now Mamata Didi is looking jittery.… The people of Bengal remember each of your acts meant for appeasement,” Modi said.

The Prime Minister referred to the injury Mamata suffered in Nandigram on March 10. “We were very worried after learning about your injury.… We pray to God, wishing you a speedy recovery,” he said. Modi accused Trinamul of encouraging the birth of a new breed of Maoists for political benefit.

The BJP’s attempt to polarise the electorate a day after Mamata proposed an inclusive universal basic income scheme shows that the BJP has lost the plot, said Trinamul MP and spokesperson Saugata Roy.

“They’ve realised that they have lost ground here. So, they are using their ultimate weapon of polarisation,” Roy said.