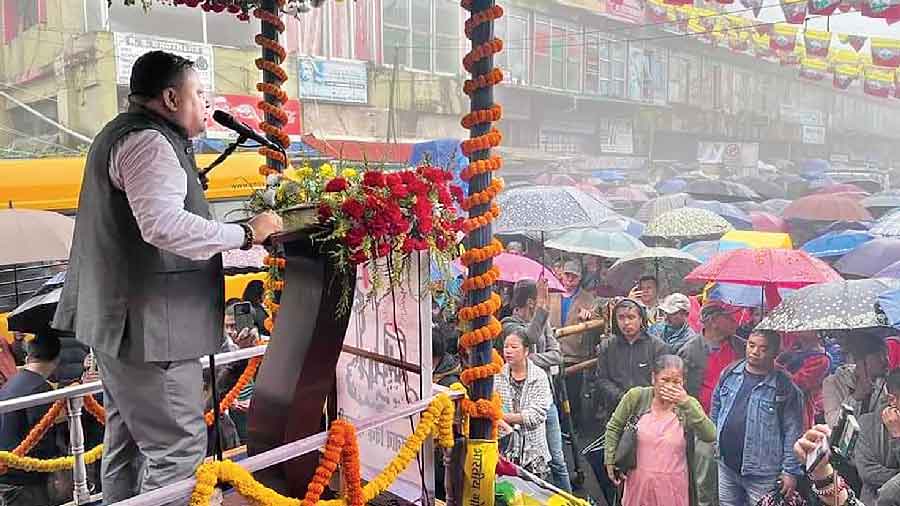 Bharatiya Gorkha Prakjatantrik Morcha chief Anit Thapa at a public meeting in Motor Stand of Darjeeling on the final day of the campaign for the GTA polls on Friday
The Telegraph Picture
Vivek Chhetri   |   Darjeeling   |   Published 25.06.22, 03:29 AM

The elections to the Gorkhaland Territorial Administration Sabha on Sunday is expected to concretise the political power in the hills that has been in a flux for five years.

Since 2017, first Binay Tamang and then Anit Thapa had been the most important political figures in the hills by virtue of them being nominated to the GTA as chairperson of the board of administrators. After last year’s Bengal Assembly polls, the government appointed an official as administrator.

Both Tamang and Thapa, once associated with the Gorkha Janmukti Morcha, have faced multiple electoral setbacks in the past five years.

“I have lost four elections since 2017 but despite the losses I have done a lot for the hills. If elected, I can do more work,” said Thapa, who now heads the Bharatiya Gorkha Prajatantrik Morcha (BGPM).

Thapa and his party were defeated in the 2019 Lok Sabha elections, the 2019 Darjeeling Assembly bypoll and the 2021 Bengal Assembly elections by the BJP-GNLF combine and by Ajoy Edwards’s Hamro Party in the Darjeeling municipality polls.

Edwards had been with the GNLF since 2017 before he floated the Hamro Party recently.

“Edwards is not new, he has won four elections but has delivered nothing,” alleged Thapa.

Many believe that this year the fight would be largely between Thapa’s BGPM and Edwards’s Hamro Party.

“The party that forms the GTA board will be in a position to command hill politics. Bodies like the DGHC and the GTA have been the power centres for the hills and polls to these command more importance than Lok Sabha and Assembly elections here,” said an observer, who added that some Independents, too, could be decisive in this election.

Many agree that the GTA elections would have a direct bearing on the upcoming civic and panchayat polls.

The BJP and its allies, Gorkha National Liberation Front (GNLF), the Communist Party of Revolutionary Marxists (CPRM) and even Bimal Gurung’s Gorkha Janmukti Morcha have decided not to contest the GTA elections.

These parties had fared poorly in the Darjeeling municipality elections and politically it would have best suited them had the GTA polls not been held now.

“No wonder the GNLF was quick to file a petition in Calcutta High Court, seeking to stop the election, but in vein. This shows their desperation at the prevailing political situation in the hills,” said a BGPM leader.

The BJP-led Centre’s inability to come up with something concrete on the promised “permanent political solution” and also on the demand of granting tribal status to 11 communities from the region has put the GNLF and its other allies in a tight spot.

Sources in Gurung’s Morcha said that despite their opposition to GTA elections, the party had begun urging its supporters to vote for select candidates.

“We have been identifying some candidates and urging our supporters to vote for them,” said a source in an indication that the results of the GTA elections could also determine the sustainability of political parties in the hills.