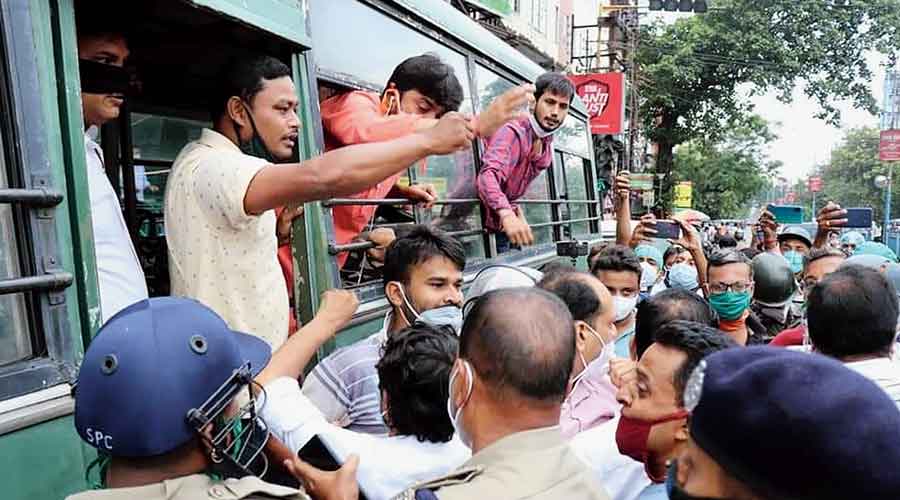 The Bengal government on Tuesday made public the post-mortem report on deceased MLA Debendra Nath Roy and said police suspected that he had committed suicide.

The MLA of Hemtabad in North Dinajpur district, who had defected from the CPM to the BJP last year, was found hanging at a shop in his native village of Baliadighi on Monday morning.

Talking to the media at Nabanna on Tuesday, state home secretary Alapan Bandopadhyay quoted the post-mortem report and said: “The death was due to effects of hanging as stated above, ante-mortem in nature.”

The state police, he added, suspected it to be a case of suicide after the primary investigations followed by the post-mortem report. The home secretary said reports of chemical examination would reveal more details before adding that the investigation would be taken to its logical end and no political interference or pressure would be entertained.

Sources in the North Dinajpur district police said they had started the investigation based on the purported suicide note seized from the pocket of the shirt Roy was wearing.

“The note had mentioned names of two people… One of them, Niloy Singha, a resident of Makdumpur in Malda, has been arrested,” said a source.

Multiple sources involved in the investigation revealed that Chadima Roy, the MLA’s wife, had mentioned the names of Singha and Mamun Ali, who is from Chanchal in Malda district, in a complaint she had filed at Raiganj police station.

“The complaint said both these persons had taken loans from the MLA and whenever he would ask them to repay the money, they would threaten him. She has also said Singha had stayed at their home for a few years,” said a police officer.

The police have found that Roy was associated with a cooperative society which plays an important role in extending credit in rural areas. They are now probing into the dealings of the society.

The investigators also came to know that he had sold an ancestral plot recently. “His wife is saying he had paid the duo, but the loaned amount seems to be much more than what he had got from selling the land. We need to find out the source of the additional fund,” the officer said.

Chandima told reporters on Tuesday that she would never believe the suicide theory. “For the past few months, he was being pressurised by leaders of a political party to defect from the BJP. We find no reason for him to commit suicide. He has been murdered,” she said on Tuesday.

Chandima also said her husband had been suffering from chronic knee pain and it was unlikely that he had walked 1.5km from his home to commit suicide. “Also, the road that leads to the shop from our house was muddy and there was no mud in his body. Further, he never moves out barefoot but his slippers were not found anywhere,” the wife added.

A 12-hour bandh called by the BJP in north Bengal on Tuesday to protest the MLA’s “murder” failed to leave an impact in tea gardens and the Darjeeling hills.