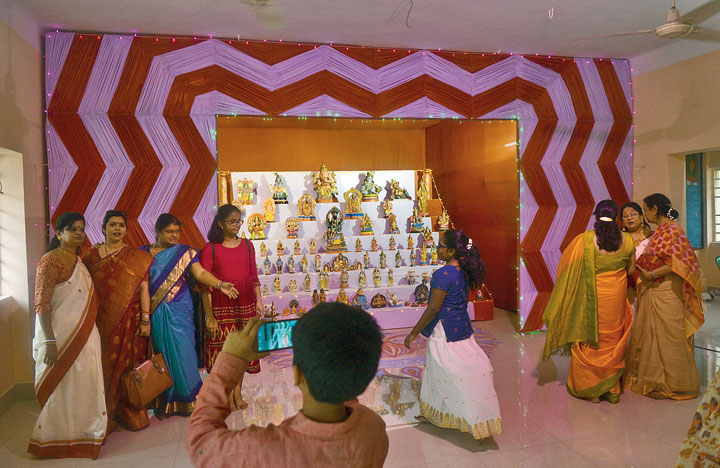 More than 150 women from Bengali and Marwari communities besides the south Indian states took part in the celebration. They received betel leaf and nuts, coconut and sweets among other things as part of the Manjal Kungumam ritual.

The Navratri celebrations began at the club on Mahalaya, when the idols were displayed and an alpona created. The alpona will remain for the entire duration of Navratri which will end with a Dashami puja.

“This is primarily the Tamil way of celebrating Navratri. The idols are decorated and displayed. During this period it’s a tradition in Tamil Nadu for people to visit each others’ homes,” said Unnikrishnan Nayar, the general secretary of the club.

Idols made of clay or paper mache are worshipped in most homes and on Navami a Saraswati puja is performed.

The Manjal Kungumam is organised by the ladies’ wing of the club every year and women from different associations are invited.

“This time the theme of our Navratri celebrations is to blend with Bengal. In keeping with the theme, the nine core members of the ladies’ wing wore gorod saris and we created an alpona,” said Padma Ray Bardhan, the vice-president of the club and coordinator of the ladies’ wing.

“Visiting each others’ homes creates an opportunity to mingle. If one meets people at a friend’s place one doesn’t know, they too are invited home,” Ray Bardhan said. “But Navratri is very crowded in Calcutta and so we keep the visits for before Navratri.”

A cultural programme that included a Bharatnatyam performance was staged at the club on Tuesday.

The club was formed in 1926 and Nobel laureate C.V. Raman and former president Sarvapalli Radhakrishnan were the founder members.

“This was the only association at that time to bring together the south Indian fraternity under one banner and only gradually many associations have come up. Reading, sports and cultural activities are some of the prominent activities of the club,” said Nayar, who has been associated with the club for over 40 years.

The ladies’ wing meets every Tuesday and organises activities such as talks by doctors on health issues, recipe competitions and games. Women’s Day was celebrated with focus on women’s empowerment. On grandmothers’ day, the importance of being a grandmother was talked about.