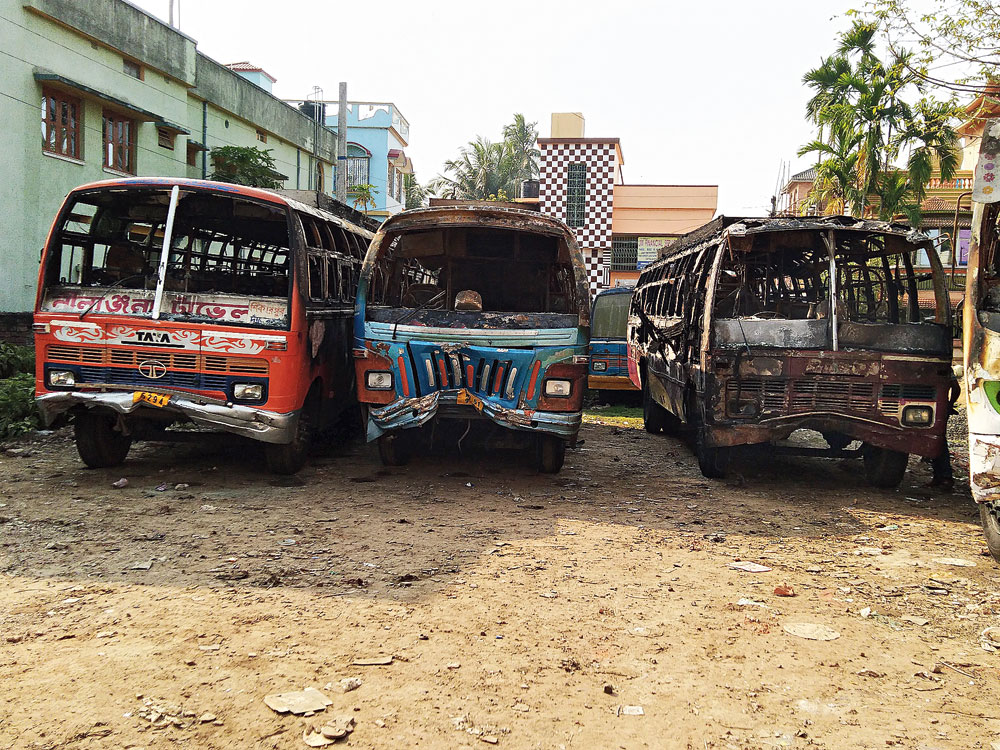 At least a dozen private buses caught fire mysteriously at the Krishnagar depot in Nadia late on Thursday night.

Police said four buses were charred and three damaged in the fire that started around 11.30pm. No one was injured.

Police sources said they had started an investigation. Three fire tenders rushed to the spot and doused the fire after about an hour.

Residents and traders who called the fire brigade rescued a worker sleeping inside a bus that was in flames. There were at least 40 buses parked at the depot. Bus services on different routes were disrupted on Friday morning as it took time to remove the burnt and damaged vehicles.

Fire brigade officials, too, are yet to ascertain the cause behind the fire.

The incident comes close on the heels of similar incidents in West Burdwan’s Durgapur. In the past month about 15 cars and motorcycles were burnt mysteriously in Durgapur town. Even early on Friday morning, unknown miscreants set three motorbikes parked outside their owners’ houses on fire in Durgapur’s Bidhannagar area.

In Krishnagar, some local traders on conditions of anonymity claimed that probably the buses caught fire from a kerosene stove being used by some bus workers to cook food inside the vehicle.

A youth who works in a hotel near the bus stand said, “Around 11pm yesterday when I went inside the bus stand to use the toilet, I saw some bus workers cooking inside a bus. I later saw the same bus catch fire. I suspect that the fire broke out from the kerosene stove.”

Santosh Ghosh, who lost two buses in the fire, said: “There were not enough passengers at the depot on Thursday evening due to Holi. By 9pm, it became deserted. The workers left parking the buses by 9.30pm. So it is not possible to find out who were there at the bus stand or who were cooking inside a bus.”

A trader said that he saw flames around 11.20pm from the bus stand. “Someone then called fire brigade. A police team also arrived soon there,” he said.

An officer of the Krishnagar fire brigade said: “It appears that the fire started with one bus and the flames soon spread to others parked closely.”

Sudip Nag, vice president of Nadia district Bus Owners’ Association, said that they had requested the police to solve the mystery and arrest the culprits if it was not an accidental fire.