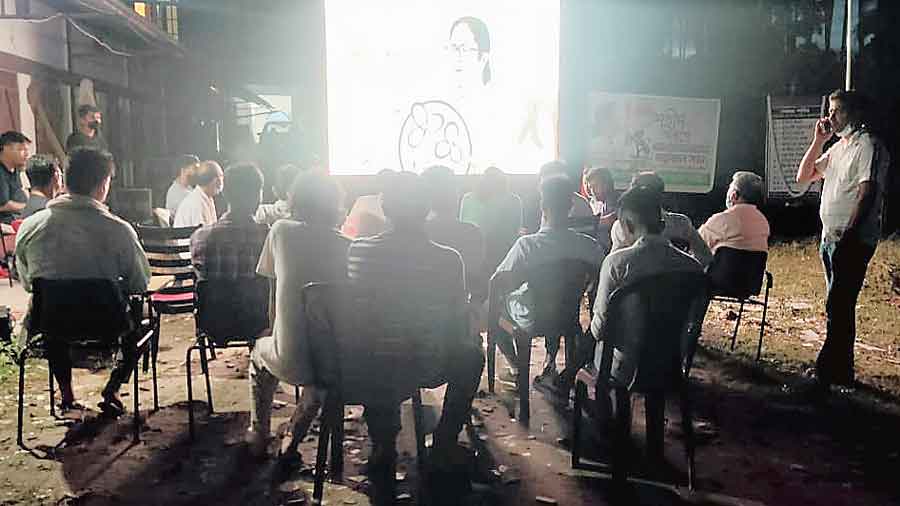 Singh told this paper after his release that he was taken into custody soon after hoisting the party flag, around 11.30am, and released around 4.30pm, along with 80 party workers, for allegedly violating Covid-19 restrictions.

“I am aware that in Tripura, in other states… our party was not allowed to conduct the programme…. Only BJP will speak, nobody else will speak? Is this the ethos of our democracy?” she asked.

According to Singh, the day was observed by offering floral tributes to the martyrs and hoisting the party flag in 54 of Tripura’s 60 Assembly seats despite alleged attempts by the BJP-led administration to disrupt the events on the pretext of Covid-19 curbs.

But in Tripura, at least, many Trinamul supporters and the public were deprived of hearing the speech from the event venues, alleged Singh.

“We installed five giant screens in as many places, two in state capital Agartala and one each in North District, Gomati and Dhalai districts, at a cost of Rs 25,000, but the vendor returned the advance,” said Singh, who said he was appointed state president of the party in December, 2017.

Not to give up, the Dharmanagar party unit in North District set up a giant screen inside their office compound around 2pm. “Our Dharmanagar district leaders continued playing the Bengal chief minister’s recorded speech till late in the evening,” Singh said, alleging that BJP activists had damaged 10 bikes and an auto-rickshaw, belonging to Trinamul supporters, in Unakoti district on Tuesday night.

Unakoti police officers said Singh and 35 others were detained as they had not taken permission from the administration to host the event, a must during the pandemic.

Trinamul supporters have become active in Tripura after the party’s victory in Bengal. Recently, a song in Bengali, “Tripura koitase, Mamata-di aaitase (Tripura is saying, Mamata-di is coming)"”by singer Kamalika Chakraborty went viral in the state, capturing the sudden change in mood in favour of Trinamul, which also saw some BJP and CPM members joining the party.

Trinamul, which lost its six MLAs to the BJP before the 2018 Assembly election in Tripura, sees an opportunity in the Bengali-majority Northeast state where both the Congress and the Left are struggling to stay afloat.

“There is a wave. We will definitely win the 2023 polls here, because of BJP-IPFT’s misrule ” claimed Singh.

The BJP-IPFT combine won the 2018 polls, ending the Left’s 25-year reign, but it has been tough sailing for the Biplab Deb government since.

In other BJP-ruled states of Uttar Pradesh, Assam and Gujarat too, Trinamul alleged administrative harassment.

Trinamul planned to hold 25 programmes to show the event live in Uttar Pradesh, but not a single one was allowed in the open, as the local administration refused permission. Trinamul leaders had to organise the event inside their local offices.

“We had all arrangements ready to set up a stage roadside or outside our party offices to reach out to the people of Lucknow and other places in Uttar Pradesh. Interestingly, we were not given permission to hold our open programmes here on the grounds of Covid-19 safety protocols. The Yogi Adityanath government is afraid to air the voice of Mamata Banerjee,” said Sukhendu Sekhar Roy, Trinamul’s national spokesperson, from Lucknow.

Other leaders said the same happened in Ahmedabad, Gujarat, where many flexes put up to campaign for the virtual show were removed and the local administration stopped to broadcast at many places.

We strongly condemn the attack on @AITCofficial supporters in @BJP4India ruled states.

We will NOT be cowed down by such intimidation tactics!

On #ShahidDibas let me reiterate that TRINAMOOL will not budge an inch in its fight against the oppressive forces. COME WHAT MAY!

“We strongly condemn the attack on @AITCofficial supporters in @BJP4India ruled states. We will NOT be cowed down by such intimidation tactics!” posted the party’s No. 2.

“On #ShahidDibas let me reiterate that TRINAMOOL will not budge an inch in its fight against the oppressive forces. COME WHAT MAY!” he added in his post on the microblogging site.