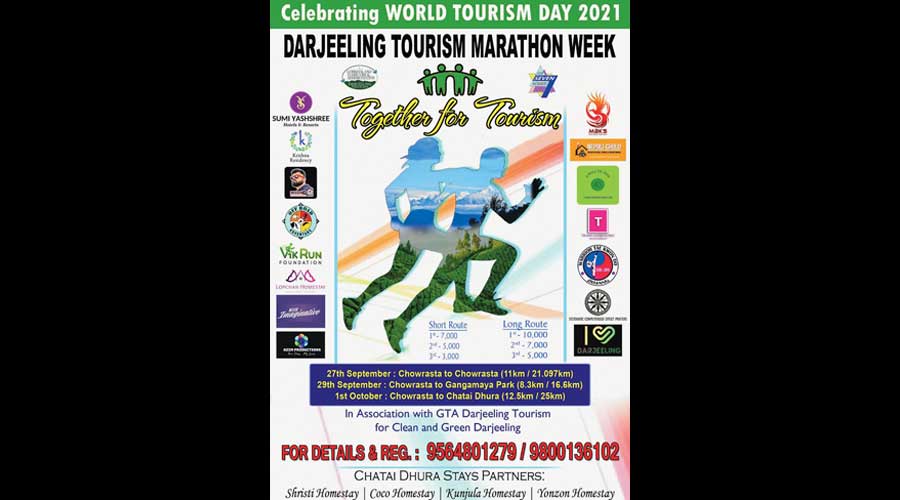 A promotional item for the marathon organised by Prakash Adhikari aka Daniel Saint.
Sourced by the correspondent
Vivek Chhetri   |   Darjeeling   |   Published 01.10.21, 02:37 AM

A person reportedly from Nepal came to Darjeeling, made hundreds run marathons and before the events ended, he allegedly fled with lakhs of rupees collected from sponsors and participants.

Since Thursday morning, the phone of Prakash Adhikari a.k.a. Daniel Saint has been switched off. He is missing.

When some people went to his rented place, the landlord gave them the photocopy of a passport of “Prakash Adhikari” of Kathmandu. Some participants filed a general diary with Darjeeling Sadar police station.

Information from multiple sources suggests Adhikari came to Darjeeling as Daniel Saint over a month back, rented a place at Bokshi Jhora and started contacting hill runners by claiming to be an event manager from Mumbai with a company, Club Seven Wonders.

He proposed three marathons on September 27 and 29 and October 1 in Darjeeling. For promotional items, he used logos of the tourism department of the Gorkhaland Territorial Administration.

The September 27 and 29 runs were held, but he did not give prizes to winners, which raised doubts, said a participant. GTA officials denied any involvement with the events. “Our only event on September 27 (tourism day) was at Lal Khoti (GTA headquarters) where we launched our website,” said a GTA tourism  official.

The official said Adhikari met them. “He asked for permission to host the events but we told them the police department could give it. He wanted the Gorkha Rangamanch Bhawan for free but we told him the information and cultural affairs department looked after it,” the tourism official said.

Sources in the GTA I&CA department said Adhikari booked the auditorium. “We asked him to pay Rs 15,000 as rent by September 22. He did not pay, so we cancelled his booking,” an I&CA official said.

“Since it was a sports event, we handed him Rs 5,000, but despite repeated reminders he did not give us a receipt. Last evening (Wednesday), I had sternly told him to provide the receipt as early as possible,” said Vikram Rai, founder, Vik-Run Foundation.

Participants in the beauty pageant said the proposed grooming and photoshoot didn’t take place. “He kept postponing them,” said a participant.