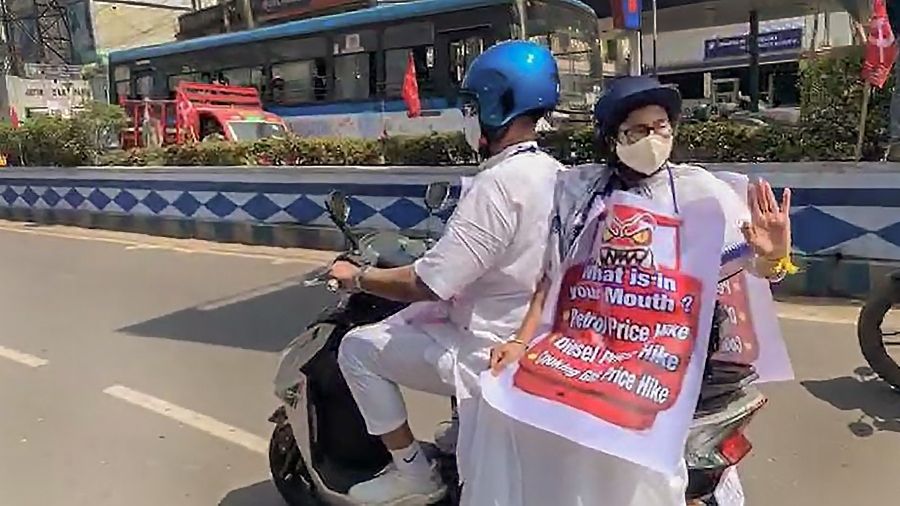 With a placard protesting against the petrol price hike hanging around her neck, helmet-clad Banerjee waved at people on both sides of the road during the seven-km-long journey from Hazra More to the state secretariat.

After reaching Nabanna following a 45-minute ride, Mamata slammed the BJP-led government at the Centre saying, "We are protesting against the fuel price hike. The Modi government only makes false promises. They have done nothing to bring down fuel prices. You can see the difference in petrol prices when the Modi government came to power and now."

She said the TMC will launch a stir against fuel price rise from Friday.

"The BJP had promised free LPG connections to the people before coming to power and now they are hiking its price," Mamata said.

"The way they are changing the names of stadiums, who knows they might change the name of the country in the coming days," she quipped.

Speaking on her unique protest, the chief minister said, "I rode on an e-scooter to protest the manner in which petrol, diesel and LPG prices are rising.

"A middle-class household needs two LPG cylinders a month which they can't afford now. Over 1 crore people in our state also depend on kerosene which they are not getting now," she said.

Banerjee said she will return home in the evening on the e-scooter.

The chief minister was trailed by security personnel on other two-wheelers as other vehicles followed her a little distance away.

There was tight security along the Hazra-Exide-AJC Bose Road-Vidyasagar Setu route.

The opposition parties, however, called her protest an "election stunt".

"The CM is resorting to novel theatrics ahead of the elections but the state government is not doing its bit to reduce fuel prices," BJP leader Jai Prakash Majumder said.

Congress Legislature Party leader Abdul Mannan said, "This is nothing but an election stunt. Why is the state government not substantially withdrawing cess to blunt the effect of the fuel price hike to help the common man?"

"Mamata had ridden pillion on Chhatradhar Mahato's motorcycle in the Jangalmahal region before coming to power in the state but later people of that region witnessed the TMC's intimidation and terror," he said.